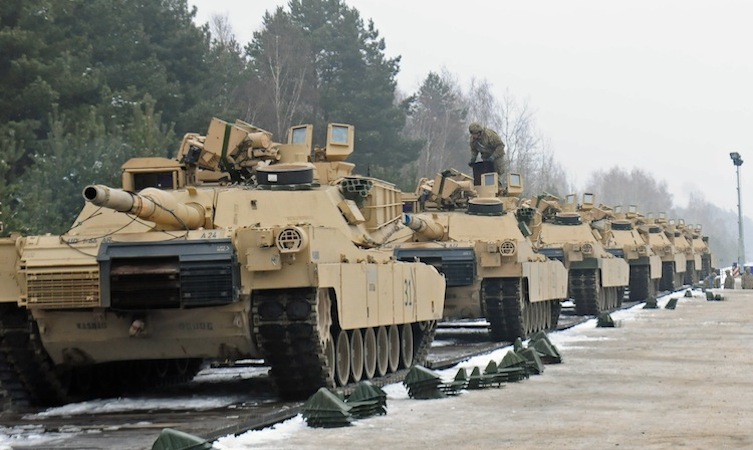 “These Iron Soldiers…send a clear signal of our commitment as they round out our joint team’s capability in a very significant way,” the general said.  “The events in 2014 and the Trans-Atlantic declarations from the Wales and Warsaw Summits, demonstrate the indivisibility and unity of the Alliance in light of Russia’s invasion into Ukraine.  These events forged a commitment, and a plan, to build our defense and deterrence posture in Europe.”

“Know that our commitment to defense is rock-solid,” he said. “We must maintain the territorial integrity of our Alliance and maintain a Europe that is whole, free, prosperous, and at peace.”

Operation Atlantic Resolve was designed to reassure NATO allies and partners in the region after Russia invaded Ukraine.  General Ray said the arrival of the ABCT was just one aspect of America’s commitment to the region.

“The thousands of Iron Soldiers here are a key part of our joint land, naval, air, space and cyberspace team,” he said.  “Be assured, the full weight of the US military stands behind these sentinels of freedom.”

Deployed from Fort Carson, Colo., the 3,500 Armored Brigade Combat Team and 2,000 vehicles, join a recently increased land, sea and air presence in the region.  Operation Atlantic Resolve was designed to reassure NATO allies and partners in the region in light of Russia’s 2014 invasion into Ukraine.  The arrival of the 3rd ABCT starts back-to-back rotations of U.S. troops and equipment in the region.  The ABCT convoy will mass in Poland and then it will be dispersed across seven locations in Eastern Europe for training and exercises with European allies.

The arrival of the 3rd ABCT starts back-to-back rotations of U.S. troops and equipment in the region.

These forces represent one element of America’s commitment to European security, and it is ready to defend that security if called upon. They will train with our allies and partners, ultimately leading to greater interoperability.

“We are invested…from infrastructure upgrades across the continent to airfields and ranges, we’re also prepositioning supplies and equipment, and exercising with our Allies and partners,” he said in a previous statement. “We will also increase the scope and complexity of many exercises in our portfolio focusing on joint interoperability, missile defense and crisis response operations.”