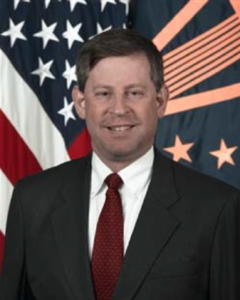 Mr. James A. Hursch is the Acting Secretary of Defense Representative in Europe (A/SECDEFREPEUR) and the Acting Defense Advisor (A/DEFAD) for the U.S. Mission to NATO. As A/SECDEFREPEUR, he is responsible for executive level planning, recommending, coordinating, and monitoring Department of Defense policies, programs, and initiatives in Europe. As A/DEFAD, he is responsible for the formulation, coordination, and presentation of DoD policies to the U.S. Ambassador to NATO. The Office of the Defense Advisor is comprised of 40 mid- and senior-level military and civilian members from the Department of Defense and the Department of Homeland Security. Mr. Hursch assumed duties as Deputy Defense Advisor at the US Mission in 2013.

Prior to joining the US Mission, Jim served as the Director of the Defense Technology Security Administration (DTSA) from 2010-2013. He served as Acting Director beginning in October 2008 and Acting Deputy Director prior to that managing a staff of 220 policy analysts, engineers, and licensing officers responsible for developing and implementing DoD technology security policies for international transfers of defense-related goods, services, and technologies. For his service as Director, Jim was awarded the Secretary of Defense Distinguished Civilian Service Award.

Jim joined the Management Division of the Defense Security Assistance Agency (DSAA) in 1991, where his duties included Excess Defense Articles, reports to Congress, and apportionment of Foreign Military Financing funds. In 1995, Jim moved to the Europe/Pacific Division of DSAA, where he was the country desk officer for Central Europe. From 1989 to 1991, he served as a Faculty Member specializing in defense economics and international relations in the Institute of Higher Defense Studies at the National Defense University. His book, Theories of International Relations, was published in 1991. Jim served first as a consultant to and later as a staff member of the Office of Defense Guidance and Program Planning in the Office of the Under Secretary of Defense for Policy (1985-89), Department of Defense.