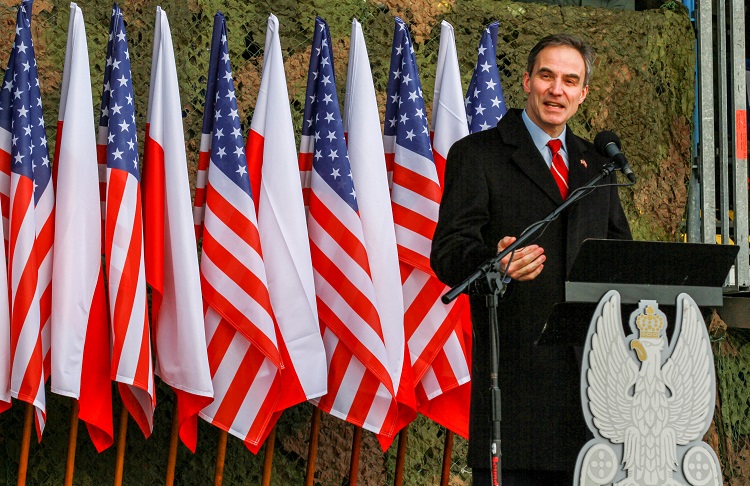 [The full force of this American Armored Brigade is now here in Poland. Their equipment is tested and they are ready to move out.]

This is a highly trained armored brigade with our most advanced equipment—America’s most capable fighting force. Its deployment demonstrates the U.S. commitment to lead the Alliance in ensuring the capability and the will to consider an attack on any ally as an attack on all of us.

Now it is time to look forward to the opportunities this deployment presents. The armed forces of our great nations are embarking on a whole new level of cooperation, collaboration, and preparation to defend every inch of Alliance territory together. Our militaries will become more integrated, more interoperable than ever before. They will be ready to fight as one.

Our powerful conventional forces will serve as pillars of confidence as we strengthen the other crucial elements of deterrence and defense—including countering disinformation, cyber attacks, hybrid warfare, and covert threats. We will deter and defend across the full spectrum of conflict.

In just over two months, Poland will receive new NATO forces. In April, an American battalion of some 800 US soldiers will begin to serve in Poland’s 15th Mechnized Brigade in Orzysz in the northeast. British and Romanian forces will join us. Our British, Canadian and German allies will field battalions in Estonia, Latvia, and Lithuania, also joined by forces from other allies.

In short, we have much important work to do together in the coming months. Wiele ważnej pracy przed nami.

It will not always be easy and there will be challenges, which we will learn from. But already with the presence of these forces we can feel a growing sense of security, upon which peace and prosperity depend.