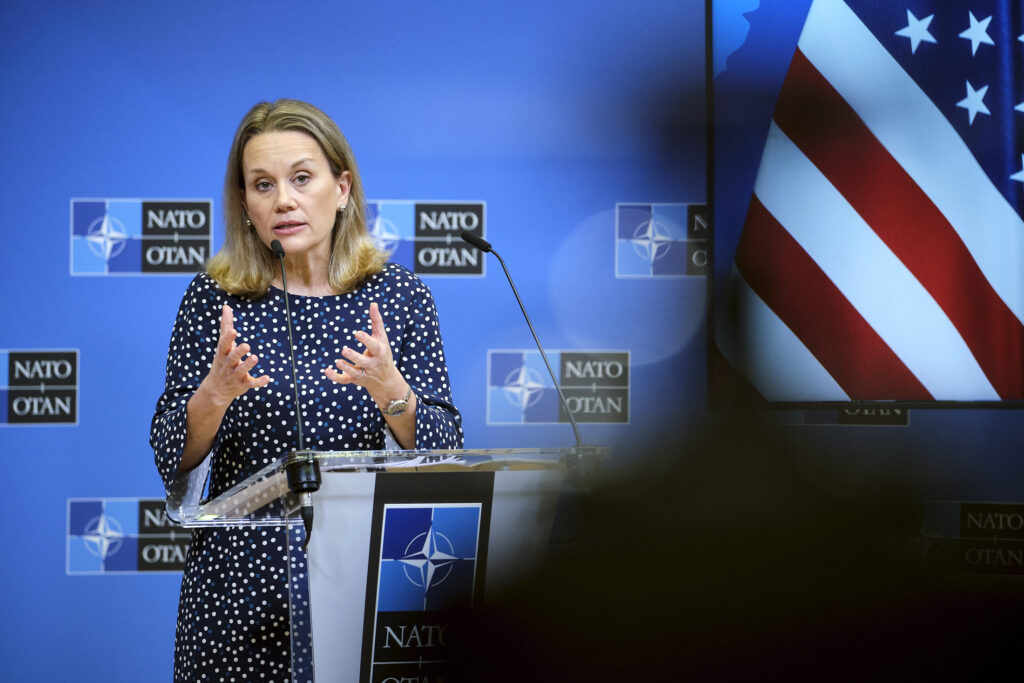 Ambassador Smith:  Good afternoon everybody.  It’s a pleasure to be with you today.  As I think most of you know, I’m still somewhat new to my position here in Brussels, but I would like to take just a few minutes to offer some impressions from my first couple of months here.

I have been profoundly impressed by the unity of this alliance in recent weeks.  We obviously all bring very different perspectives to NATO by virtue of our history, our geography.  But we are united in our purpose, in our commitment to collective self defense.

When I sat in the NATO-Russia Council just a couple of weeks ago, every ally delivered a very clear message to Russia, and that message very  much remains the same.  We remain open to dialogue with Moscow.  We urge Russia to deescalate through diplomacy and dialogue.  But we’ve also been clear, allies are ready to impose serious consequences should Russia further invade Ukraine.

So that’s the choice that Russia faces at the moment.  It can choose the path of diplomacy that can lead to peace and security or the path that will lead only to conflict, severe consequences and international condemnation.

We are concerned by Russia’s continued escalation but we remain committed to pursuing the diplomatic path should Russia so choose.  This week’s ministerial meeting which kicks off tomorrow is an important opportunity for NATO Defense Ministers to synchronize on our defensive posture, our efforts to deter Russian attacks on Ukraine, and our readiness to respond if necessary.

Question:  [Inaudible] talk of [continued] escalation.  And while the SecGen said that some signs which lead to optimism.  Do you share his sense of optimism?  Do you see any sign which is making you more optimistic in this crisis?

Ambassador Smith:  As you just heard the Secretary General say, we’ve been monitoring the situation around Ukraine for many weeks now and all we have seen, unfortunately is escalation.  We’ve seen Russia move forces closer to the border of Ukraine in greater and greater numbers.  We’ve seen some of the enablers arriving on the scene, the prepositioning of equipment, we’ve seen various supporting elements arriving there very close to the border, both in Belarus and on the border, Russia’s border with Ukraine.

We have also noticed today that Russia is claiming that they are moving towards some sort of deescalation.  We are monitoring the situation.  I don’t have anything further to say about that.  We’ll have to verify whether or not that is in fact the case.

You may remember in late December last year Russia made a similar claim that at the moment, I think it was the last week of December, that Russia was deescalating.  At that moment when we went in to verify we actually found no signs of that and since then we’ve only seen Russian forces moving in the opposite direction.

Ambassador, when it comes to the ministerial, I wondered if there will be any decisions on whether to set up or at least begin the process of setting up enhanced forward presence battalions in the southeast.  And whether you thought that could go beyond just Romania.  Thank you.

Ambassador Smith:  At this point we’ve had a number of allies come forward.  They’ve all recently made decisions to reinforce NATO’s eastern flank, and the list is quite long.  If you can bear with me for a minute, I would just note that of course you’ve heard about the U.S. decision that we’ve moved both troops from the United States into Central and Eastern Europe, but we’ve also moved troops from Germany into Romania, for example.

But in addition to the decisions that the United States has taken in recent days and weeks, we also have the United Kingdom deploying additional troops to Poland; Germany deploying additional troops to NATO’s Multinational Battle Group in Lithuania; Denmark sending a frigate to the Baltic Sea; the Netherlands sending F-35 fighter jets to Bulgaria.  You heard the Secretary General talking about France expressing a readiness to send troops to the eastern part of the alliance under NATO command; Spain sending ships to NATO Naval Forces.

I hate to go on and on, but what’s important here is that folks understand that the alliance already is in this moment where countries feel the need to reinforce NATO’s eastern flank.

Those discussions will continue in the next 48 hours as Defense Ministers convene here in Brussels and they will no doubt be looking at the possibility of any additional enhancements based on what we’re seeing on the ground.  So stay tuned.  We’ll see how the Defense Ministerial goes in the next couple of days.

Question:  [Politico-EU].  Ambassador, I’m sure nothing would be more of a relief to Washington than if there is no new Russian invasion or attack.  But obviously the warnings are having a huge impact in Ukraine, whether that’s on the economy or on people fleeing in fear.  Do you worry that there’s a risk that if this is a big fake-out that in fact the U.S. and NATO will be losing an information war, so to speak, and that trust going forward may be in doubt?

Ambassador Smith:  I think the messages that we’ve been delivering to our friends in Ukraine have been very crystal clear and I hope reassuring in the sense that all of us here at NATO, the transatlantic partners, support Ukraine’s territorial integrity and its sovereignty.  That NATO keeps the door open to NATO enlargement, and that we have insisted that Russia will not have a veto over that.

Similarly, the United States has provided security assistance to Ukraine as have other individual members of the alliance.  And most importantly, what we’ve conveyed to our friends in Kyiv is that we’re doing our very best to pursue a diplomatic solution here.  We believe that that is the best path forward.  We have urged our Russian counterparts in multiple forums to pursue that path, whether it’s been bilaterally, in the [SSD], the NATO-Russia Council, or at the OSCE.

But similarly, we have felt the need to take some prudent steps to ensure that American citizens are aware of our concerns that Russia now has what it needs in and around Ukraine to move into Ukraine any day now.  So while we will keep the door open to dialogue and hope that that’s what Putin ultimately chooses, we do feel that we have to take sone steps now to prepare for every contingency.

Question:  [Bloomberg].  I was just curious whether all NATO allies share the same risk assessment that the U.S. has announced in recent days, that there could be an invasion as soon as this week.  Mainly because we’ve heard comments from senior EU officials in recent weeks that were maybe a bit more relaxed about the situation.  It’s hard to tell whether that’s opinion or actual, based on intelligence.  Thanks.

Ambassador Smith:  A couple of things on that.  I can’t speak to any discussions that are ongoing downtown at the European Union.  I’ll leave it to them and my American colleagues there to comment on what they’re picking up.

Here inside the NATO headquarters I can tell you that we are all concerned about Russian actions in and around Ukraine.  Very concerned by not only the troop buildup but the ways in which they’re using disinformation right now to try and destabilize Ukraine from within.

I don’t see any divide among allies on the feeling of the urgency of the situation.  And what the United States, but not just the United States, other allies have done this as well, all of us have worked to try and share intelligence so that we can share a common site picture and make the assessment together.  In that sense I actually think the transatlantic cooperation has been very effective in the sense that we can sit down almost on a daily basis and assess events on the ground and then make decisions about the steps we might need to prepare, again, for any contingency.

So for me, sitting inside this building, I see a tremendous amount of unity on that front, a deep concern.

Back to the point about deescalation and Russian claims today on deescalation.  You expressed some skepticism on that.  I’m wondering what specific actions or measures you’d want to see on the ground in order to share the assessment that there’s been deescalation.  Thank you.

Ambassador Smith:  Look, we know, we’ve been able to watch quite closely in terms of what they’re moving.  Again, the Secretary General went into considerable detail about whether it’s S400s or jets or field hospitals, field kitchens.  There’s a whole list of things that we’ve been watching them move ever closer to Ukraine’s border.

I think deescalation is exactly that.  That means moving those troops, moving your force posture away from Ukraine’s border, out of Ukraine.  We’ve seen up to 30,000 troops moving into Belarus.  Obviously we would have to see much of that force posture shift for us to feel reassured about deescalation.

But again, I don’t have much to share because these reports just came out.  We’ll assess the situation.  We will work to try and verify and go from there.

Question:  Ministers will meet with the Georgian and Ukraine Defense Ministers day after tomorrow.  What will be main message?  And also interesting about the Bucharest summit that Georgia and Ukraine will be NATO members.  And how important the relations and the partnership with Georgia?  Thank you.

Ambassador Smith:  Both Ukraine and Georgia are very important partners to this alliance.  I think most of the members, all of the members I think I can speak on behalf of all members, understand the important relationship that we have both with Georgia and Ukraine.

In this moment I think the messages will be pretty clear to our friends in Georgia and Ukraine that we support them, we respect their sovereignty, territorial integrity, and that again, the door to enlargement is open.

We made crystal clear in the NATO-Russia Council, all four long hours, that we are not prepared to discuss the open door policy with Russia.  We are prepared to discuss other things.  We’ve talked about arms control, transparency, risk reduction.  But on open door that message at 30 when we sat there with Grushko could not have been clearer.  We will maintain the commitments that we have on open door and I think the statement you heard at the summit last summer was an important reminder of how firm allies feel about the open door policy.

Moderator:  Thank you very much.  That concludes today’s press conference.