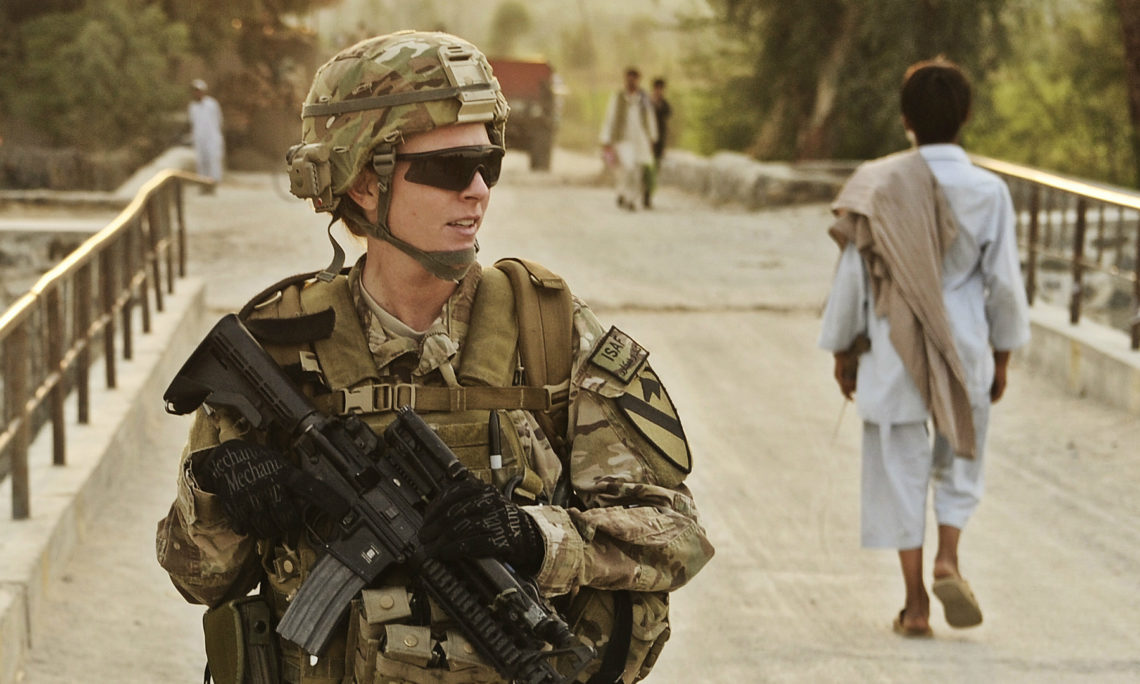 WASHINGTON, December 3, 2015 — Defense Secretary Ash Carter announced today that beginning in January 2016, all military occupations and positions will be open to women, without exception.

For the first time in U.S. military history, as long as they qualify and meet specific standards, the secretary said women will be able to contribute to the Defense Department mission with no barriers at all in their way.

“They’ll be allowed to drive tanks, fire mortars and lead infantry soldiers into combat,” Carter added. “They’ll be able to serve as Army Rangers and Green Berets, Navy SEALs, Marine Corps infantry, Air Force parajumpers, and everything else that was previously open only to men.”

Even more importantly, he said, the military services will be better able to harness the skills and perspectives that talented women have to offer.

Though more than 111,000 positions had opened to women in uniform since 2013 until today’s announcement, Carter said, about 10 percent of military positions — nearly 220,000 — had remained closed to women. These included infantry, armor, reconnaissance, and some special operations units, the secretary said.

Over the past three years, he added, senior civilian and military leaders across the Army, Navy, Air Force, Marine Corps and Special Operations Command have studied the integration of women into these positions.

“Last month I received their recommendations [and] the data, studies and surveys on which they were based regarding whether any of those remaining positions warrant a continued exemption from being opened to women,” Carter said, noting that the Army, Navy, Air Force and Socom said none of the positions warranted exemptions.

The Marine Corps asked for a partial exemption in areas that included infantry, machine gunner, fire support reconnaissance and others, he added, “[but] we are a joint force and I have decided to make a decision which applies to the entire force.”

Chairman of the Joint Chiefs of Staff Marine Corps Gen. Joseph F. Dunford Jr. was the Marine Corps commandant at the time, and Carter said that he and Dunford have discussed the issue many times.

“I just met with him and the other chiefs and service secretaries today, and he will be a full part of implementation,” Carter added, noting that he believes the issues raised by the Marine Corps can and will be addressed in implementation.

In a memorandum to the secretaries of all military departments and others, Carter directed the military services to open all military occupational specialties to women 30 days from today — a waiting period required by law — and by that date to provide updated implementation plans for integrating women into the positions now open to them.

Carter said Deputy Defense Secretary Bob Work and Vice Chairman of the Joint Chiefs of Staff Air Force Gen. Paul Selva will oversee the decision’s short-term implementation, ensure there are no unintended consequences to the joint force, and periodically update Carter and Dunford.

1. Implementation will be pursued with the objective of improved force effectiveness.

2. Leaders must assign tasks and jobs throughout the force based on ability, not gender.

3. Equal opportunity likely will not mean equal participation by men and women in all specialties, and there will be no quotas.

4. Studies conducted by the services and Socom indicate that on average there are physical and other differences between men and women, and implementation will take this into account.

5. The department will address the fact that some surveys suggest that some service members, men and women, will perceive that integration could damage combat effectiveness.

6. Particularly in the specialties that are newly open to women, survey data and the judgment of service leaders indicate that the performance of small teams is important.

7. The United States and some of its closest friends and allies are committed to having militaries that include men and women, but not all nations share this perspective.

Integrating Women in all Military Jobs

“Fully integrating women into all military positions will make the U.S. armed forces better and stronger but there will be problems to fix and challenges to overcome,” he said. “We shouldn’t diminish that.”

The military has long prided itself on being a meritocracy, where those who serve are judged only on what they have to offer to help defend the country, Carter said.

“That’s why we have the finest fighting force the world has ever known,” he added, “and it’s one other way we will strive to ensure that the force of the future remains so, long into the future.”