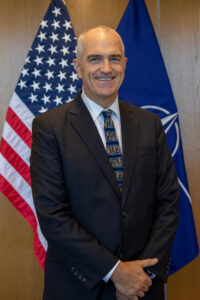 Rick Holtzapple, a career member of the Foreign Service with the rank of Minister-Counselor, arrived in Brussels in September 2021 to serve as Deputy Permanent Representative and Deputy Chief of Mission of the U.S. Mission to NATO. Mr. Holtzapple has previously served as Director of the State Department’s Office for NATO and OSCE Affairs in Washington from 2012 to 2014, culminating with the 2014 NATO Summit in Wales. He also served as Deputy Chief of Mission at the U.S. Embassy to Benin and, on two separate occasions, in the National Security Council’s European Directorate at the White House, from 1998 to 2000 and from 2010 to 2012.

Before arriving in Brussels, Mr. Holtzapple was on the faculty of the National Defense University in Washington, DC for three years, and spent one year as a Senior Advisor at the State Department’s Foreign Service Institute. Other assignments with the State Department were as Political Minister-Counselor in Paris, as Director of the State Department’s Office of EU Affairs, as Chief of the Political and Economic Section in Zagreb, at the U.S. Mission to the EU, in the Bureau of Intelligence and Research, and at the U.S. Embassies in Kinshasa and Djibouti.

On detail from the State Department, Rick has served on assignments with a UN peacekeeping mission in Croatia, at the National Democratic Institute in Washington, and with the European Commission in Brussels.