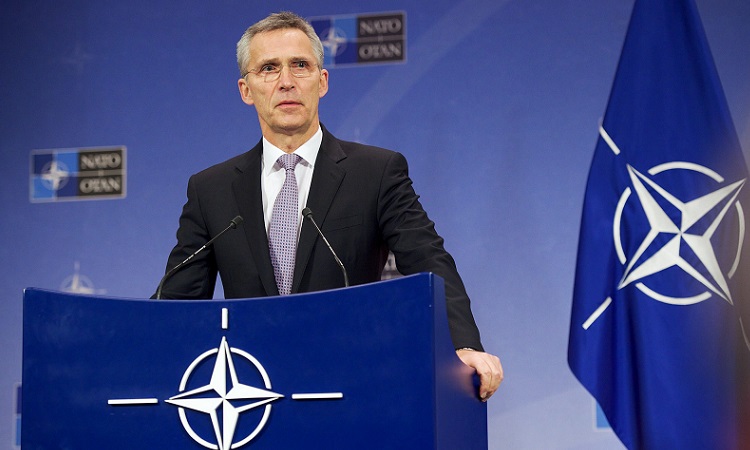 We have just concluded a discussion of NATO’s efforts to project stability beyond our borders.

We reviewed the developments in the Middle East and North Africa. Allies are deeply concerned about the renewed offensive by the Syrian regime, supported by Russia. The scale of the humanitarian catastrophe is staggering. We continue to call for a political solution. Including a cessation of violence and the resumption of humanitarian aid. Both in Syria and in Iraq, the US-led Global Coalition is making steady progress. ISIL is losing ground. Once Mosul falls, local forces will need to hold the territory. So building local capacity remains essential.

This was a key issue at our Warsaw Summit in July. We decided to step up efforts to help countries in our wider neighbourhood to build strong institutions, train local forces, and tackle terrorism.

We decided to provide AWACS support to the Counter-ISIL Coalition, to start training and capacity building in Iraq and to enhance maritime security in the Mediterranean.

We are now implementing those decisions. Our AWACS surveillance aircraft have provided information to the Counter-ISIL Coalition since October. We have trained hundreds of Iraqi officers in Jordan. In January, we will expand that training and capacity-building into Iraq itself. And in the Central Mediterranean, our new Operation Sea Guardian is now supporting the EU’s Operation Sophia with information and logistics. And we continue to support our partners Georgia, the Republic of Moldova and Ukraine as they pursue important reforms.

Today we discussed how NATO can strengthen our partnerships, make better use of military training and better resource our efforts.

NATO has a strong track-record in projecting stability in Afghanistan and in the Western Balkans. We discussed the Western Balkans today. NATO has had a significant presence there for many years. With our KFOR mission keeping the peace for all the people of Kosovo, three regional offices, the prospect of membership for two countries in the region and active partnerships with all the rest, including Serbia.

Montenegro shows how much Euro-Atlantic integration can achieve and we welcome that 15 Allies have already ratified Montenegro’s accession to NATO.  But elsewhere in the region, progress has faltered and we have seen backsliding on reform.

So we must do more to support reform and stability, with more political dialogue, more practical cooperation, and by working even more closely with the European Union.

Because stability in the Western Balkans brings greater security to Europe.

And with that, I’m ready to take your questions.

JENS STOLTENBERG (NATO Secretary General): With that I am ready to take your questions.

MODERATOR:  We will start with the Wall Street Journal.

WALL STREET JOURNAL REPORTER:   I wonder on, you mentioned Syria and I wonder if you are worried the Russians are stalling for time, waiting for a new administration in America that might, eh, cut a different deal and, if you think a delay will lead to a worse humanitarian disaster there, even worse?

JENS STOLTENBERG:   Any delay in a diplomatic solution will lead to more suffering and more deaths and eh, what we now see in Syria is a humanitarian catastrophe which has been worsened by the renewed offensive by the Syrian regime supported by Russia.  So any delay in any political solution will increase the human suffering in Syria and that’s the reason why  we continue to call for a political solution and starting with a ceasefire, a cessation of hostilities and a resumption of humanitarian aid and we also discussed the situation in Syria during our meeting today.   Secretary Kerry updated us on his efforts and he has been tireless in his efforts to try find a political solution, a diplomatic solution to the crisis in Syria and he has really shown very strong personal commitment to try to find a solution and to end the human suffering in Syria.

MONTENEGRO RADIO REPORTER:  (Inaudible) from Montenegro.  You were talking about stability in the Western Balkans.  So can you tell us how Montenegrin membership in NATO could contribute to that stability of the whole region, thank you?

JENS STOLTENBERG:   The idea of NATO is that we stand together and we protect each other so, of course it would be good for Montenegro to be part of NATO but, it would be also good for NATO that Montenegro becomes a full member of the Alliance.  Montenegro would be part of the strongest military alliance in the world.  Montenegro would be covered by the security guarantees that NATO provides and that we stand together and protect each other and that an attack on one ally will be regarded an attack on the whole Alliance and of course that will contribute to peace and stability and security in Montenegro, as we have seen for almost seven decades in the rest of Europe, for those countries that are a member of the Alliance.  But I would also like to underline that, ah, NATO membership is not only good for Montenegro, but it’s also good for NATO in the way that Montenegro contributes to our collective defense and to the security of the whole Alliance, by its strategic location where they are close to the Adriatic Sea and by bringing partnerships into the Alliance and also by the fact that Montenegro has some military capabilities which are important also to NATO and we’ve seen that Montenegro has already contributed, for instance, to our presence in Afghanistan.  So this is good for NATO, good for Montenegro and we are looking forward to have Montenegro as a full member as soon as possible.

ARTHUR BEASLEY (Financial Times Reporter):   Hi Arthur Beasley here.  No matter what anyone says the question of the new administration’s support for NATO and its Article 5 guarantees still lingers.  Would the best way out of this uncertainty be for President-Elect Trump to explicitly affirm his commitment to NATO?  We know what he said to you, we know what he said to other leaders, but he hasn’t said so publicly himself.

JENS STOLTENBERG:   I’m absolutely confident that, eh, the United States will maintain its strong commitment to NATO, to the Trans-Atlantic bond and to the security guarantees for Europe.  I am confident, both because he has said so to many European leaders, and he also told me the same as such, when we had a phone call some weeks ago.  But on top of that I think it’s also important to underline that, eh, just a few days ago he U.S. Congress authorized a budget which quadrupled the funding for the U.S. military presence in Europe with a new brigade, with equipment for yet another brigade, for funding more prepositioned supplies and, and eh, and eh, different kinds of equipment.  So this is a budget which has strong bipartisan support.  So I think that just underpins the very clear message that the U.S. will stay committed to Europe and to our Trans-Atlantic Alliance, because a strong NATO, a strong NATO is good for Europe but it’s also good for the United States.  You to have to remember that the only time we have involved Article 5, was after an attack on the United States and hundreds of thousands of European NATO Allies, soldiers from European NATO Allies have been deployed in Afghanistan and more than 1,000 have lost their lives in an operation which was a direct response to an attack on the United States.  Stability in Europe, peace in Europe is important for Europe but it’s also important for the United States, so I am absolutely confident that also with the new administration, the U.S. will continue to stay committed to NATO.  Let me add one more thing, and that is that of course, eh, the President-Elect also focused on the need for increased defense spending.  That has been the message also from President Obama and, I agree with them,because those Allies who spend less than 2% of GDP on defense should increase defense spending.  So that’s something we all agree on and we have to implement and we have started to increase defense spending among European Allies.

MODERATOR:  The gentleman in the second row.

MARC BARONE:  Actually Marc Barone Vista Italian Defaca (sp?).  Could you please provide us with more details about your training activity in Iraq to come next year, thank you?

JENS STOLTENBERG:   Eh, we will, we are working on the details but we will be there in January and the main focus will be, at least for the beginning, on countering IED, improvised explosive devices.  You know that this is really something that causes a lot of suffering and one of the main reasons for casualties and therefore everything that we can do to help the Iraqi Army with improving their capabilities and to fight or to conquer IED’s, is of great importance. We will also work on civil military planning and on also some other areas but, we will start and then we will, of course, assess what we do and consider to do more.  Everything is based on a request from the Iraqi government.  I met with Prime Minister al-Abadi and, earlier this year, and he sent us a letter to NATO where he requested this kind of help and we will start to provide inside Iraq training from January on but we have already started to train Iraqi officers in Jordan.

SLOVAK PRAVDA REPORTER:  Thank you.  (Inaudible).  Mister Secretary General how much have you been talking during the last session about the influence of Russia in Western Balkans and what are the conclusions and secondly, another question in the declaration we have from NATO from today there is, there is a sentence that E.U. and NATO will cooperate to make a positive narrative, to make bigger outreach of the positive narrative? What is this positive narrative and what do we want to achieve by it?  To counter others, namely Russia?

JENS STOLTENBERG:   So we don’t seek confrontation with Russia but we believe in the sovereign right of every nation to decide its own future.  We believe in open democratic societies where we have different views, different open debates reflecting the, the, the different political positions of different parties and different groups in each and every country including the right of every country to decide its own path.  We have seen some increased, eh, Russian presence, also in the Western Balkans.  We will not counter Russian propaganda with propaganda.  We will counter it with an open free debate because we believe that the facts and the truth in the long run will prevail and, and eh, of course we’ve also seen some reports about Russian citizens being involved in a very serious incident in Montenegro on election day and this is something that authorities in Montenegro is now investigating, investigating but, I also know that Serbia has helped and contributed to try to find out to get all the facts on the table related to this incident that we saw on election day in Montenegro, but we believe in open free democratic societies and we believe that reform, modernizing security institutions, governments will increase the resilience of the countries in the Western Balkans and that would be also the best way to, in a way, make them more able to protect themselves against any kind of outside interference.  This is also an area where we work together with the European Union and their declaration we, or the statement we agreed on earlier today, will provide us with the framework for also working more closer together with the European Union also in addressing these issues in the Western Balkans.

MODERATOR:   Thank you very much.  That’s all we have time for tonight.  We will see you again tomorrow.