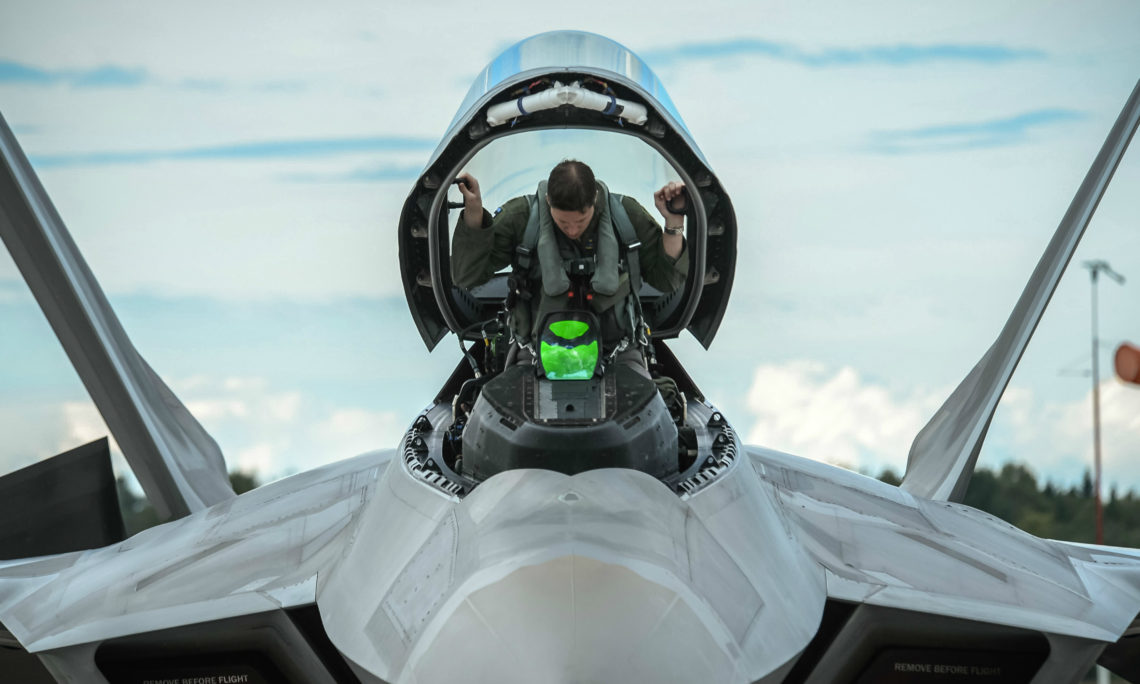 U.S. Air Force F-22 Raptors flew in the skies over Lask Air Base, Poland this week. Four F-22 Raptors arrived in Germany as part of the first-ever F-22 training deployment to Europe.
F-22s from the 95th Fighter Squadron, Tyndall AFB, Florida were deployed to Europe over the weekend as part of the U.S. European Reassurance Initiative in an effort to bring together NATO Allies to enhance NATO’s readiness in the face of emerging security threats.
In support of their deployment, a C-17 Globemaster III from the 437th Airlift Wing, Charleston Air Force Base, South Carolina, and approximately 60 Airmen arrived at Spangdahlem Air Base, Germany to train with allied air forces and U.S. services through mid-September.
The F-22 Raptor is designed to project air dominance, rapidly and at great distances. It performs both air-to-air and air-to-ground missions. Airmen who are a part of this inaugural F-22 training deployment will train with our joint partners and our NATO allies across Europe as part of our continued effort to assure allies and demonstrate the United States’ commitment to security and stability of Europe.
“This inaugural Raptor training deployment is the perfect opportunity for these advanced aircraft to train alongside other U.S. Air Force aircraft, joint partners, and NATO allies,” said General Frank Gorenc, U.S. Air Forces in Europe and Air Forces Africa commander. “This deployment advances our airpower evolution and demonstrates our resolve and commitment to European safety and security.”
The training will prove that 5th generation fighters can deploy successfully to European bases and other NATO installations while also affording the chance for familiarization flight training within the European theater. It will also give them the chance to conduct combat air training with different aircraft like U.S. F-15 Eagles,  F-16 Fighting Falcons and A-10 Warthogs as well as a range of aircraft from NATO Allies and partners, including the generation 4.5 Eurofighter Typhoon, which serves the European air forces of the United Kingdom, Spain, Italy, Germany and Austria.
“We have allies in Europe who have advanced capabilities – the Eurofighter as just an example. We have aircraft with very advanced capabilities, and we need, and they would like for us, to be able to interoperate in multiple-type scenarios. And so being able to train side-by-side with them and do that kind of training is really, really important to us, and that’s what this is for,” said Air Force Chief of Staff Gen. Mark Welsh.
Secretary of the Air Force, Deborah Lee James, announced the decision to place the F-22s in Europe to support combatant commander requirements in a press conference on August 24. “This deployment advances our airpower evolution and demonstrates our resolve and commitment to European safety and security,” James said.
For more information on F-22s, see the U.S. Air Force F-22 Raptor Fact Sheet.