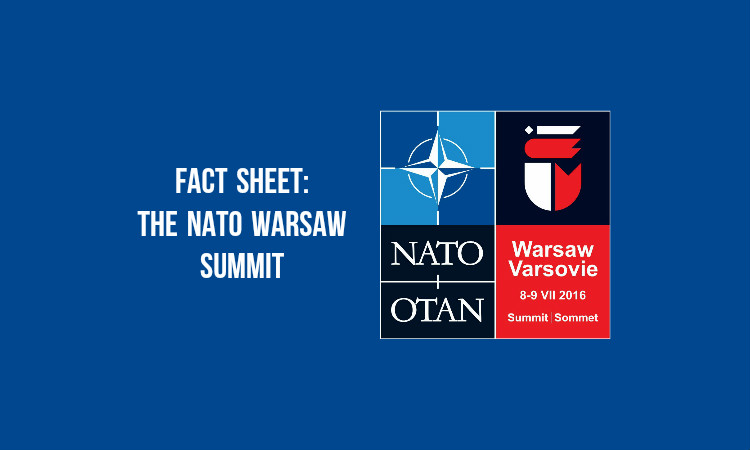 On July 8-9, 2016, President Obama and the heads of state and government of our 27 NATO allies, plus new observer state Montenegro, will gather in Warsaw, Poland, for a pivotal NATO Summit, the 27th since the signing of the Washington Treaty that established the Alliance in 1949.  The last NATO Summit occurred in September 2014 in Wales.

The summit will underscore NATO unity as allied leaders focus on defense, deterrence, and projecting stability beyond NATO’s borders, ensuring the Alliance adapts to meet the full range of 21st century security challenges.  To the east, Russia’s aggression against Ukraine threatens our vision of a Europe that is whole, free, and at peace.  To the south, the terrorist threat from ISIL poses a growing danger to more allies, while the refugee and migrant crisis poses new challenges to Europe.  At the summit, NATO will ensure it is able to respond to the full spectrum of security challenges from any direction.

Strengthening and modernizing NATO’s deterrence and defense posture will be a key deliverable at the summit.  The 2014 Wales Summit focused on assurance and beginning to improve the readiness of allied forces.  At the Warsaw Summit, allies will mark the full implementation of NATO’s Readiness Action Plan – including the tripling in size of the NATO Response Force with a brigade-sized high-readiness spearhead force at its core able to move within in a matter of days.  Leaders will note solid progress towards the pledge on defense investment, and go beyond the assurance paradigm by modernizing the Alliance’s deterrence and defense posture.

Specifically, allied leaders will take decisions to enhance collective defense by enhancing NATO’s forward presence on the eastern flank through the deployment of one rotational battalion each in Estonia, Latvia, Lithuania, and Poland, as well as developing a tailored forward presence in Romania and Bulgaria.  In addition, NATO will further develop the Alliance’s ballistic missile defense capabilities, and ensure its nuclear deterrent remains credible, safe, secure, and effective.  Allies will also take steps to build resilience against non-traditional challenges such as hybrid tactics, cyber vulnerabilities, and terrorist threats as essential components of credible deterrence and defense.  Each of these efforts supports the explicit commitments allies have to one another in Articles 3 and 5 of the Washington Treaty regarding our individual and collective capacity to resist armed attack, the indivisibility of our security, and our mutual responsibility to contribute to collective defense.

Together, these measures represent the largest reinforcement of NATO’s collective defence and deterrence since the end of the Cold War.  NATO does not seek confrontation, but will defend all allies against any threat.  Everything NATO does is defensive, proportionate, and in line with each ally’s international commitments.  Our deterrence and defense aims not to provoke a conflict, but to prevent one.

Allies will also decide at the summit to expand the Alliance’s efforts to project stability beyond NATO’s borders.  All NATO allies are members of the U.S.-led Global Coalition to Counter ISIL (C-ISIL), and the Alliance will take additional steps at the summit to bolster C-ISIL efforts, including through direct NATO support to the C-ISIL coalition as well as through enhanced training of the Iraqi Security Forces.  In the Aegean Sea, NATO is already providing capabilities to support EU and national efforts to address the refugee and migrant crisis in Europe, and will seek to decide to further enhance our maritime security cooperation with the European Union to help address the security challenges in the Central Mediterranean Sea.  NATO is also focusing and intensifying its defense capacity building and other areas of security cooperation with regional partners, such as Iraq, Jordan, Tunisia, Morocco, and Mauritania to address the root causes of instability.

Allies will also modernize their approach to partnerships more broadly.  NATO’s partners are crucial security providers, many having contributed to NATO’s ongoing operations in Afghanistan and Kosovo.  At the summit, NATO will also highlight closer cooperation with the European Union as key to dealing with the evolving security environment and challenges faced by both organizations in concrete areas, such as fighting hybrid and cyber threats, supporting our partners in defence capacity building, and increasing maritime security.

This collaboration is enhanced by the Alliance’s deepening cooperation with regional partners like Sweden and Finland, whose leaders will participate in Warsaw.  NATO continues its assistance to partners in the East, such as Ukraine, Georgia, and Moldova to strengthen resilience and boost self-defense capabilities – in particular, with a comprehensive package of assistance for Ukraine and by strengthening the Substantial NATO-Georgia Package agreed at Wales.

The Alliance remains committed to Afghanistan’s stability.  At the summit, allies will agree to continue the Resolute Support train, advise, and assist mission in a flexible regional format beyond 2016, and just as crucially to sustain donor financial assistance to the Afghan National Defense and Security Forces through 2020 so the Afghans can defend their country and push back violent extremism.

In December 2015, allies unanimously agreed to invite Montenegro to begin accession talks with NATO, and in May 2016 signed the Accession Protocol that will lead to membership once ratified by all NATO members.  Montenegro will participate in all Warsaw Summit meetings.  Its forthcoming membership will enhance stability in the Western Balkans and demonstrate the Alliance’s enduring commitment to its Open Door policy.