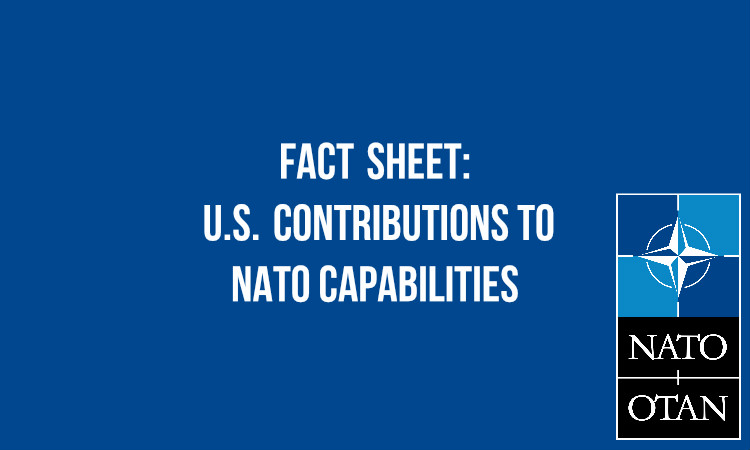 The United States and our 27 allies are strongly committed to NATO’s three core tasks of collective defense, crisis management, and cooperative security.  In pursuit of these tasks, NATO seeks a range of capabilities and other resources from allies.  These capabilities are provided mostly from allied national inventories, but also in the form of military personnel assigned to the NATO Command Structure and a range of common-funded communications, command, control and intelligence capabilities to support that NATO Command Structure.

Like all allies, the United States does not actually transfer forces to NATO until the Supreme Allied Commander Europe requests them for a particular NATO-led operation that has been authorized by NATO’s North Atlantic Council.  For purposes of coherently planning for future capabilities, NATO asks each allied nation, through the assignment of various “capability targets,” to develop or maintain in its inventory a fair share of the total capabilities that may be required by NATO.  Allied defense ministers undertake to pursue these capability targets in their national defense plans.

For most allies, certain high-end conventional U.S. military capabilities, and an independent strategic-level nuclear deterrent, would be out of reach, due to cost or level of technology.  Examples include large deck aircraft carrier battle forces, upper layer ballistic missile defense interceptor capability, advanced stand-off electronic warfare capability, and large-scale, globally-deployable logistics capabilities.  The Alliance depends mainly on the United States for these long-range power projection-related capabilities that have high conventional deterrence value.  Some allies have some of these capabilities, in limited quantities, but if they were not able to operate as part of a multinational force that includes predominantly U.S. enabling capabilities, most allies would not be able to mount an effective deterrent, nor conduct high intensity or large-scale, long duration operations.  Therefore, declaring these enabling capabilities to be available to NATO, for planning purposes, can be an effective force multiplier for the United States, recognizing that additional allied forces include nearly two million military personnel equipped and potentially available for joint operations.  At the same time, NATO has undertaken to reduce its over-reliance on the United States by asking other allies to develop more of these enabling capabilities.  The F-35 Joint Strike Fighter, which will introduce fifth generation fighter capability to several allied air forces, is a prime example.

The United States also funds about 22 percent of the relatively small NATO Common Funded budgets (approximately $685 million out of NATO’s $2.8 billion per year) which finance shared capabilities that benefit all allies.  This shared funding accounts for just 0.03 percent of the allied nations’ aggregate defense spending, yet every $22 the United States contributes leverages $100 worth of Alliance capability.  Common Funding supports, among other things, certain Alliance operational costs (such as in Afghanistan or Kosovo); NATO AWACS (see below); training and exercises; joint facilities and infrastructure; common communications; the NATO headquarters and staff; and NATO’s unparalleled multinational integrated military command structure.

For that NATO Command Structure, the United States and other allies contribute military personnel (around 8,950 total) to staff the NATO Command Structure headquarters that command and control NATO operations.  The United States provides around 930 personnel, or about 10 percent of the requirement, and hosts the headquarters of NATO’s Allied Command Transformation as part of the community of military installations in and around Norfolk, Virginia.