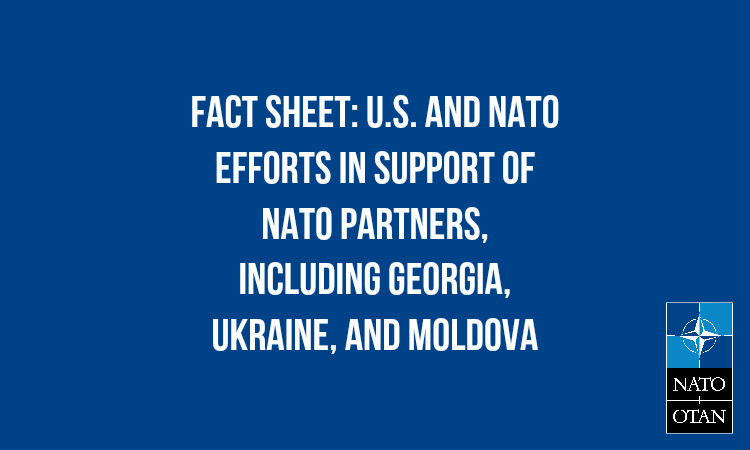 FACT SHEET: U.S. and NATO Efforts in Support of NATO Partners, including Georgia, Ukraine, and Moldova

At their inception, NATO’s partnership programs sought to reform defense sectors in the new democracies of Central and Eastern Europe, and prepare them for NATO membership.  NATO partnerships have more recently focused on interoperability and facilitating contributions to NATO operations, although political engagement and mentorship in security sector reforms continue to feature prominently.  NATO tailors its approach to the individual goals of its partner nations.

From a defense standpoint, U.S. bilateral support to NATO Partners typically falls into three categories: (1) direct security assistance; (2) training and exercises; and (3) long-term reform of defense and security institutions.  We have actively engaged in each of these areas for Ukraine, and we are intensifying support for Georgia and Moldova.

The Multinational Joint Commission on Defense Reform and Security Cooperation with Ukraine (MJC), led by the United States in partnership with Canada, Lithuania, and the United Kingdom, assesses Ukrainian requirements and prioritizes training, equipment, and advisory initiatives.

The United States and Ukraine also host two exercises each year in Ukraine – a ground forces peacekeeping exercise (RAPID TRIDENT) and a naval exercise (SEA BREEZE) in the Black Sea. These exercises seek to enhance interoperability and strengthen regional security through realistic training, while also sending an important signal of reassurance to Ukraine and other regional partners.  Ukraine also participates in other U.S.-hosted exercises elsewhere in Europe.

Trust Funds:  As a result of Russia’s aggression against Ukraine, allied leaders at the 2014 Wales Summit established five Trust Funds to support Ukraine.

This assistance will further Georgia’s goals of professionalizing and modernizing the Ministry of Defense and Armed Forces, promote NATO interoperability, enable Georgia to continue to deploy its forces to Afghanistan, and support the development and enhancement of training and education facilities.  Georgia participates in nine U.S.-sponsored exercises annually. Notably, the United States and other allies have conducted Exercise NOBLE PARTNER in Georgia over the last two years in an effort to confirm the interoperability and readiness of Georgian land forces contributing to the NATO Response Force.   The United States continues to support the Georgian Ministry of Defense in its efforts to develop a modern, effective and transparent force.  We have active defense institution building programs focused on human resources management, acquisition and procurement, and program budgeting.  The United States also has an embedded Ministry of Defense Advisor focused on military medical support.

Substantial NATO-Georgia Package:  Allies endorsed the Substantial NATO-Georgia Package (SNGP) at the Wales Summit in September 2014 with to strengthen Georgia’s defense capabilities and help Georgia advance its preparation for membership in the Alliance.  The SNGP built upon NATO’s already extensive cooperation through the Defense Education Enhancement Program (DEEP), Building Integrity Program (BI), and Professional Development Program (PDP) by initiating new lines of effort that include:

Further Practical Cooperation under the SNGP:  At the Warsaw Summit, allies will agree to enhance and deepen cooperation with Georgia across a range of efforts, and to increase high-level political dialogue with Georgia.

The United States has increased security assistance to Moldova to promote stability, professionalize and modernize its forces to promote NATO interoperability, reform its defense institutions, and facilitate Moldova’s participation in NATO operations such as in Kosovo. This assistance also provides Moldova with training and equipment for secure communications, mobility, and medical support.  In FY15, the United States increased Foreign Military Financing funds through the European Reassurance Initiative by nearly $10 million to a total of $11.25 million.  The United States will continue to prioritize security assistance support for Moldova in FY16 and FY17.

Allies agreed to develop a phased Defense and Related Security Capacity Building (DCB) package for Moldova in June 2015.  The United States leads Phase I, which is offering advice and assistance by a team of NATO defense reform experts to develop a new National Security Strategy, National Defense Strategy, and National Military Strategy.  Moldova completed its new National Security Strategy in June, and intends to complete its National Defense Strategy by the end of 2016, and the National Military Strategy in 2017.  Phase II will provide assistance and advice in developing Moldova’s land and air forces, command and control, training doctrine and infrastructure, cyber defenses, and military education, and will also assist in fighting corruption.

Efforts to assist other partners:

In addition to robust support to Ukraine, Georgia, and Moldova, allies provide support to a number of Middle East and North African countries, including but not limited to Iraq, Jordan, and Tunisia.  In July 2015, NATO approved a DCB package for Iraq to enhance its defense capacities, reform its security sector, and increase its ability to contribute to regional security.  Training in C-IED, military medicine, and civilian-military planning is occurring in Amman, Jordan.  NATO is exploring how it can re-locate some of this training into Iraq, and broaden the activities, which may include logistics, border security, and police training.  The United States currently works on defense institution building to support the long-term development of the Iraqi Ministry of Defense and its forces.  Areas of support include strategy, policy and planning, and human resources management.  The United States is also providing subject matter experts to NATO to support their line of effort focused on force structure analysis.

NATO’s cooperation with Jordan is substantial, and the Planning and Review Process is the primary instrument for practical military cooperation.  Jordan has earned Enhanced Opportunities Partner status and participates in the Operational Capability Concept Evaluation and Feedback program with two battalions.  Allies agreed a DCB package in November 2014 to provide Jordan with focused assistance in seven areas drawn from its consultations with NATO.  Jordan continues to host, with the United States, the annual EAGLE LION exercise aimed at promoting cooperation and interoperability, building functional capacity, practicing crisis management and enhancing readiness.  In 2015, Jordan also participated in: the EAGLE RESOLVE multilateral exercise in Kuwait; the Joint Forces Command Naples Regional Exercise (REGEX 15) in Greece; the TRIDENT JOUST command post and computer-assisted exercise; the Naples Journey battle staff training; and the TRIDENT JUNCTURE command post and live exercise. In 2016, Jordan will participate in the TRIDENT JUNCTURE and REGEX 16, and has agreed to host the JFC Naples REGEX 17 on its territory.  We are also committed to institutional level support for the Jordan Armed Forces (JAF).  Following a defense institution building (DIB) scoping trip in February, the United States and the JAF identified additional areas for U.S. support to include assistance in the JAF Strategic Defense Review (SDR) process, support to personnel issues such as recruiting and human resources planning, and logistics.

Since it joined the Mediterranean Dialogue (Med D) in 1994, Tunisia has participated actively in Ministerial meetings, political consultations, and meetings of the North Atlantic Council as well as in the training activities, conferences, and fora organized by the Alliance.  In 2010, Tunisia took its first steps to define areas for cooperation with NATO, and in 2014 it first signed an Individual Partnership Cooperation Program (IPCP), reflecting new areas for practical cooperation including intelligence exchange, counter-terrorism, cyber defense, and border control.  In 2016, Tunisia begins its first round of participation in its own Planning and Review Process, which is intended to assist in modernizing its national defense system, develop its operational capabilities and NATO interoperability, and promote defense transparency.  Since the “Jasmine Revolution” in 2011, the United States has committed over $225 million in bilateral security sector assistance focused on enhancing Tunisia’s capacity to counter internal and regional threats from terrorism through the provision of equipment and training, to include surveillance aircraft, ground relay systems, and critical support to their rotary wing assets.  Additionally, the United States is collaborating with Tunisia on a program that will better enable it to secure its borders.