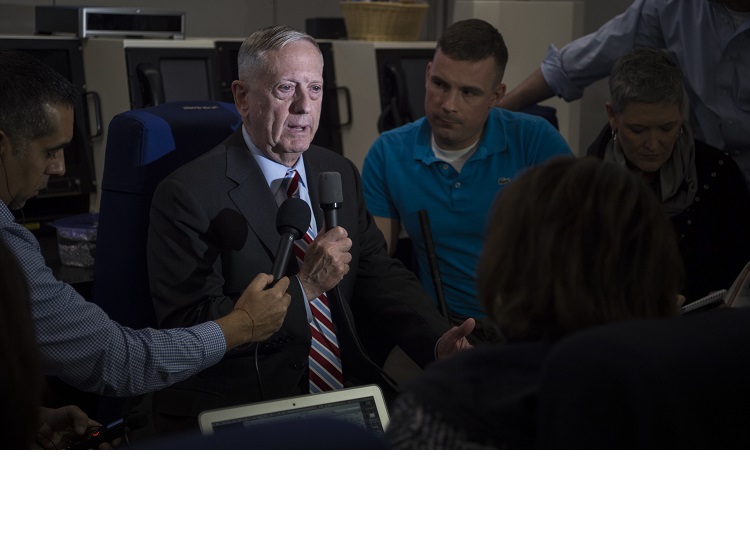 STAFF:  Yes, sir.  There’s a speaker right there.  They can — so they can hear you in the back.  So if you could speak into that — (inaudible).

SEC. MATTIS:  They all burnt me now.

Can you hear me okay?  Okay.

So we’re on our way to NATO, and you know what NATO means to us and has for how many decades.  Like as young as you all are, for your entire lives. This has been the most successful military alliance in history, one that was set up to protect Western Europe.  And the first time it went to war was when America was attacked, so if anyone had any questions about the value, you have to look at that.

But more importantly, it prevented war in Europe following two destructive wars and we clearly see the value in deterring war.  So this is a historic, as you know, it’s also a very important meeting.  MINDEFs, the ministers of defense get together and that’s where some of the civilian work is done to chart the course for their democracies, militaries.

To show NATO’s commitment to this, you’ll notice the only NATO command headquartered in the United States is Supreme Allied Commander for Transformation.  The whole point of that command is to transform NATO, so it’s right — we go to Brussels where we all get together.  We talk about that transformation, we guide it.  NATO has transformed over these last 20 years and it must continue to transform.  But in that regard, it’s clearly in NATO’s best interest that it adapt to what happened in 2014.

2014 was a watershed year.  It was a year when many of our hopes for some kind of partnership with Russia were finally shown to be unavailing.  So what we have to do — we’ve got to adapt and make certain that the transatlantic bond remains strong.  And I think in going there, what we’re doing is also proving that once again, we can react to those changing circumstances.

So that’s basically why I’m going there now.  I’m gonna do a lot of listening because I need to listen.  I’ve been gone from active duty for three and a half years.  I’m coming back in, I need to see where everyone’s thinking is at out there.  So quite a lot of listening, that sort of thing, while at the same time pointing out what several European ministers of defense have said, that it’s a fair question about the level of commitment and meeting the 2.0.

And the European ministers’ points who’ve been engaging with me — it’s a fair question, it’s an issue that’s got to be addressed.  A number of European nations already meet the 2.0.  A number of others are clearly on a trajectory to get there and we have to have an open conversation among friends and allies about where we’re going and turn to that level of commitment.

So that kind of gives you an idea of why I’m going out to Brussels right now.  I’ll go on to Munich for a day and a half and we’ll just — you know, that’ll be the message that I’m going there with.  Mostly listening, but also the things I just mentioned.

So who’s got a question?

As you’re probably very aware, there’s a lot of concerns and questions at NATO right now about what’s been going in the United States and — and with Mr. Flynn leaving office and being forced out because of inappropriate communications with Russia.

Q:  And does this concern you, potential Russian influence?

SEC. MATTIS:  Now, I understand the — the gist of all three — interconnected.

Here’s the bottom line, ladies and gentlemen.  I’m brought in to be the secretary of defense.  I give the president advice on the use of military force.  I maintain good relations, strong relations — some of you were out with me in the Pacific — and so military-to-military relations with other ministries of defense around the world.  And frankly, this has no impact.  Obviously, I haven’t changed what I’m heading there for.  It doesn’t change my message at all.  And who’s on the president’s staff is who I will work with.

And so it’s, you know, full speed ahead and listen, learn, help and lead.  That’s kind of the method I take — listen first, learn what other people face, help them wherever I can because they’ve been allies.  They stood by us after New York was attacked and so many decades before that and since.  And many of them have lost boys, lads, women in fighting the enemy that attacked America.