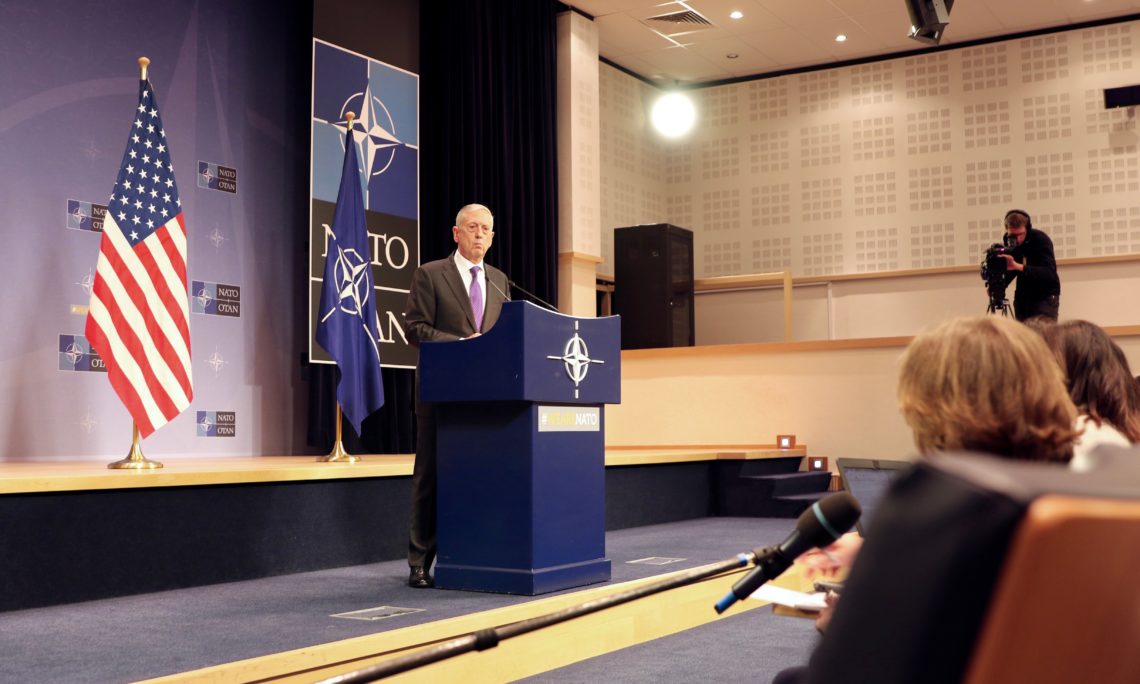 We just concluded, as you know, our NATO Defense Ministerial where General — Secretary General Stoltenberg just said that NATO remains committed to projecting stability beyond its borders, and in a world awash in change, NATO stands firm as an island of stability in a turbulent sea.

Projecting stability requires NATO’s political stance to be backed by a credible military force that is fit to fight, reducing the chance for miscalculation.

Separately, I believe we made excellent progress on numerous issues during these last two days.

We discussed the imperative for shared investments in defense spending and key capabilities to improve what we call the culture of readiness.

We have broad and deep support for Secretary General Stoltenberg’s initiative to modernize the alliance and provide ready forces responsive to NATO’s political direction. This includes increasing the speed of political decision-making in a crisis, adapting the NATO command structure, and accelerating military mobility working with the European Union, and ensuring that ready forces can move swiftly should the decision be taken.

In 2014, three nations — as you just heard from Secretary General Stoltenberg, three nations in 2014 spent 2 percent of GDP on defense. That was the same year that NATO nations met in Wales and pledged to aim for achieving 2 percent by all nations by 2024. This year, eight nations will meet the 2 percent target, and 15 nations have plans to be there by 2024, and France by 2025.

The American people have demonstrated our commitment to the NATO alliance. We do so based on the belief that fellow democracies will honor the pledge we made to each other at Wales. As Secretary General Stoltenberg said yesterday, the U.S. continued commitment presents an incentive for Europeans to do more.

Enhanced NATO E.U. level of cooperation is also growing at a steady pace and the path ahead for such collaboration is taking firm shape with the two groups working together.

We discussed NATO’s key role in the continuing fight against terrorism, NATO being a member of the Global Defeat ISIS coalition.

Although 98 percent of the territory once held by ISIS in Iraq and Syria has been liberated, the fight is not over. And we recognize and agreed to remain committed to the immediate and longer-term missions.

At the government of Iraq’s request, NATO will sustain its investment in Iraq, to project stability into the geopolitical heart of the Middle East. And America supports NATO’s initiative for a NATO training mission in Iraq.

In Afghanistan we are committed to filling critical shortfalls in our staffs there, to enable the campaign to drive the Taliban to reconciliation.

It is the collective dedication of the 29 nations and working together creates collective strength as we fight the threats from the east and from the south and defend our values.

And then we are committing more funds to this — to defense. We are collaborating more closely, whether it be on nuclear deterrence or conventional defense, and we are implementing a culture of readiness, while holding the line against terrorism. And combined this makes us strong.

As you can see, the U.S. remains fully committed to NATO, our union of democratic nations, united in our efforts to protect our populations and our way of life. And here in Brussels we are given a practical example that connects deterrence, defense and projecting stability.

So, I — I thank you. It has been an excellent few days here. A lot of work has gone into it by military and political staffs, and we are making progress. So, I — it’s never done, of course, what we’re doing is an ongoing effort, but it’s all going on the right trajectory.

So, may I take some questions?

STAFF: We’ll start with Lita Baldor from the Associated Press.

You’ve talked a bit before you came and while you’ve been here about requests you’ve made to a number of the allies on several subjects. Can you give us an update on what progress you think you made on seeking more support from allies on taking detainees from Syria?

And also on filling those gaps in the Afghanistan war —

Q: — can you tell us specifically —

SEC. MATTIS: So on filling the gaps in Afghanistan, we are still engaged with various nations. Right now, I believe, we have 12 nations that have committed specifics. Others are still going through the requirements. So, I see it going in the right direction, but again, more work needs to be done.

As far as the taking of prisoners, here’s the situation. We — I came to Europe and I needed to layout the problem. The problem is that we now have hundreds of prisoners who have proven not quite so — have not quite the same amount of zeal they once pronounced when they were winning that they would fight to the death. Well, it seems like hundreds of them are no longer quite that committed.

And we now have them in temporary facilities. And so, I wanted to bring this problem to everyone’s attention, under no illusions about that we would solve everything in 24 hours.

What I think we have done, though, we have weighed out the issue in a way and addressed that somehow we must — we, the collective we, and individually we — must take responsibility to address this issue. That has been accomplished.

Q: Okay, so: Sir Naradeen Fridi from Alar Avia news channel. Could you elaborate a little bit about the scale of the training mission — (inaudible) — training mission inside Iraq? And would you please address the — Mr. Secretary Tillerson statement calling upon Iran to withdraw its militia in Syria? As you saw last days, it becomes one of the strongest —

The foreign ministers and the representatives met in Kuwait two days ago, as far as helping Iraq get back on its feet after the trauma it’s been through at the hands of ISIS. I think they got off to a very good start. Frankly, I thought it was a better initial commitment than I anticipated with the first meeting there. And that’s going in the right direction.

At the same time, you heard from Secretary General Stoltenberg that in regards to Iraq, where we’ve generally used mobile training teams, they go in, they train for a while on de-mining, or counter IED, or — or whatever the issue is, and then they come out, we believe it’s in NATO’s best interest that we project stability. At the government of Iraq’s request, we will go to a consistent mission in Iraq to build the capabilities that they believe they need to sustain this effort and protect their people from an uprising of another type of terrorist organization, something like this.

And you had a question on Syria, was it?

Q: It’s about the — the Iran militia in Syria, which becomes a serious regional security problem, mainly between, as we saw with the —

Q: — (inaudible) confrontation between Iran and Israel inside Syria. Thank you.

SEC. MATTIS: Yeah, you know, ladies and gentlemen, I — I cannot explain why every time there’s a problem in the Middle East, whether it be in Lebanon, South Lebanon, and Lebanese Hezbollah, it’s in Syria, where Iran has propped up Assad; it’s in Yemen where they’re using it for a launching platform, the civil war, for missiles into Saudi Arabia; whether it’s in Bahrain, where the Bahrain police have captured explosive material provided, I cannot explain why Iran insists on many of the things it does.

I think it’s best that we leave Syria. The Syrians and Staffan de Mistura’s efforts by the U.N. to solve this in Geneva is the right way to go.

And in Iraq, it’s the same — it’s the same sort of thing. Let — let’s have Iraqis vote for who they want, and — and project their own image of themselves. They don’t need outside interference.

Q: Mr. Secretary, you met with your Turkish counterpart yesterday. Did you get any assurance that Turkish troops are not going to engage the SDF in Manbij?

And Turkey used pretty harsh rhetoric to ask U.S. to leave Manbij. What was your — your answer?

SEC. MATTIS: I think we are all keenly aware that NATO has only one of its nations, one of our allies that has got an insurgency inside its own borders. And NATO and America stand with Turkey on its legitimate security concerns.

And they’re right next door, as you know, to Syria, with all of the chaos there that presents — presents an ongoing threat. And you see this isn’t just about Turkey. In that case, you also see the disruption in Jordan and Lebanon and Iraq.

So, Turkey has got the same kinds of concerns. In fact, they’ve provided refugee support for — for millions of refugees out of this — it can only be called a tragic situation in Syria.

So we maintain absolutely open and honest dialogue. We met two days ago in Rome, where my counterpart, my colleague from the Ministry of Defense, was there at the Defeat ISIS meeting there in Rome. We talked here yesterday for an extended period.

We are coming together on what we can to together. It’s probably the most complex security situation, fighting situation I’ve seen in over four decades of dealing with — with fights. And it is one where I believe we are finding common ground and there are areas of uncommon ground where sometimes war just gives you bad alternatives to choose from.

But throughout this, the one thing that has marked our communication is absolute honesty and transparency with one another and a full briefing by the minister of defense of Turkey to the assembled 29 nations on the military operation they have going on.

And we continue to collaborate on ways to ensure their legitimate concerns are addressed. But our goal is to get this into the Geneva process and solve it. It will not be solved by Assad or by the Russians or by anyone else. It’s got to be solved under the U.N. auspices and it’s got to be done that way. And that’s what we’re all trying to get to.

STAFF: The last question will be from Daniel Brossler of Suddeutschen Zeitung.

Q: Sir, are you concerned about increased military role of European Union? Do you think that might — that might weaken NATO or duplicate efforts NATO is doing?

And the second question, if I may, are you disappointed that Germany will be nowhere near 2 percent in 2024 and that it is not even specifically mentioned in the coalition agreement?

SEC. MATTIS: You know, we have to recognize that every nation has its own political process.

I am confident that Germany will continue to move up in terms of its defense spending at a pace we all hope is matching the strong economy they have, and their very, very strong stance on moral values, moral leadership and human rights in the world. And those are issues that need to be defended.

In terms of the European Union, ladies and gentlemen, we have very candid discussions. I believe right now we have sufficient rigor in the political sharing, the political discussions to keep the E.U. effort, for example, on military mobility being one that enhances NATO’s common defense capability and does not draw down on it.

I am confident of that. It will take constant work, because, of course, any organization will always expand; it’s kind of in the nature of international organizations. But there is a clear understanding to include in written E.U. documents that the common defense is a NATO mission and NATO mission alone.

STAFF: Thanks, ladies and gentlemen.

SEC. MATTIS: Yes, thanks very much.