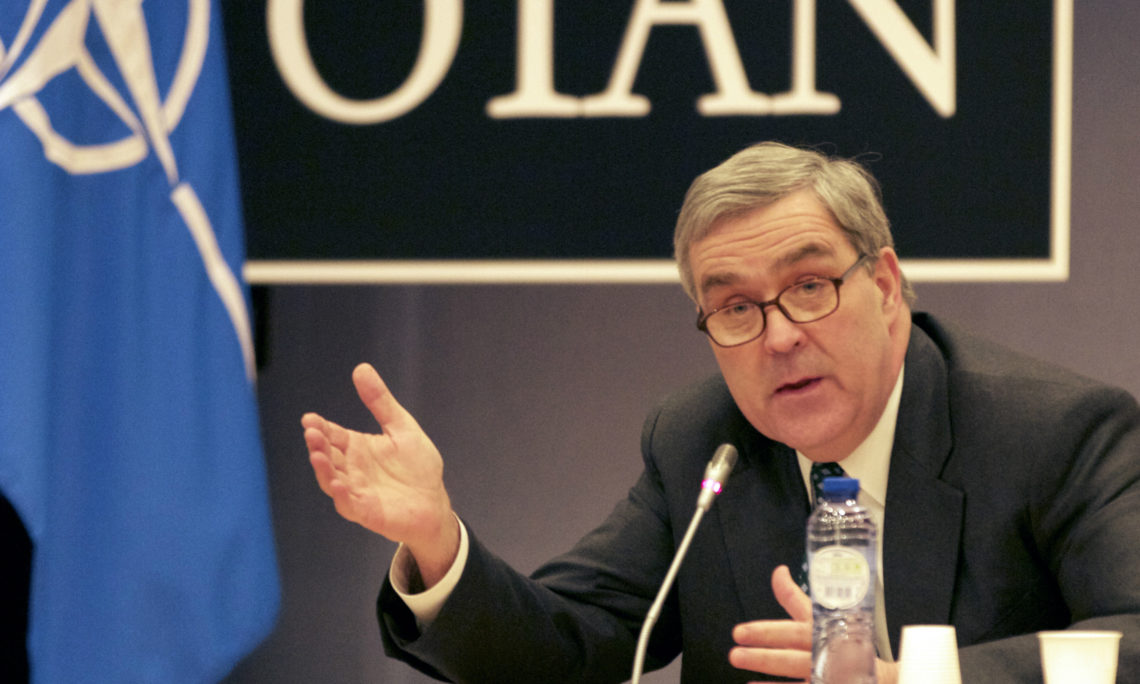 Ambassador Lute:  I want to join others in welcoming you to the U.S. Mission in NATO.

I thought I’d take just a couple of minutes to explain exactly where you are, so that this all fits.  Then I want to explain a little bit about where we sit in the 65 year history of the Alliance, because it’s our sense, certainly it’s Washington’s sense, that we may be at a point of change or what we call a strategic inflection point in the 65 – now almost 66 year –  history of the Alliance.

Now strategic inflection point, I don’t know how that translates into some of your native languages, but essentially it means that you’re at a point where things are about to shift.

There are 28 of these missions for the 28 Allies, and we’re all here under one roof in one building.  The U.S. Mission is about 50 percent from the State Department and 50 percent from the Defense Department, so we’re a blended diplomatic mission which I think is unique among all U.S. representational missions around the world.  The bilateral mission in one of your capitals is dominated by the State Department and maybe there are a few Department of Defense people there.  Here, it’s 50/50, and that represents the military nature of NATO, of the Alliance.

Every nation has a mission like ours, and every nation also has a military delegation itself.  And just as I attend and represent the United States in the North Atlantic Council, the highest political body of the Alliance, my military colleagues represent the U.S. in the military channels.  So there’s kind of two parallel structures, on diplomatic and one military, that all reside right here, with all 28 nations as well.

Another bit of NATO is the Supreme Headquarters Allied Powers Europe and headed by SACEUR, one of two four-star commanders at the strategic level.  He is part of the NATO military chain of command.  His headquarters, Phil Breedlove’s headquarters in Mons, actually, is two levels above the force commander in Afghanistan, to give you an idea.

I go through all that because I know you’re new to the headquarters. I know when I got here a year or so ago, this was not obvious, so I thought I’d share that with you.

Now I want to talk a little bit about where we are, not in the building, but where we are in the 65-year history of the Alliance.

Our sense is that you can break down the history of the Alliance into some phases or some blocks of time. Let me just quickly review those, because if I go back in history, I think you’ll see a little bit how today is arguably different.

The first 40 years, from 1949, when the Washington Treaty, which began NATO was signed, until 1989, it’s very clear — forty years of the Cold War.  Your countries know this period as well as we do, although at that time we were on opposite sides of this.  This was obviously the clear, bipolar, zero sum game struggle between the East and the West, and it essentially culminated in 1989 with the fall of the Berlin Wall, and a couple of years, later with the dissolution of the USSR.  That’s a big landmark, that’s a big first phase of 40 years for the Alliance.

The next 25 years of so, roughly from 1989 to about now, or maybe 2014, represents the phase that I can call the operational phase of NATO. During the Cold War, NATO didn’t do operations. It did defense and deterrence, and it never went to war. During the next phase, phase two, the 25 years just passed, we did constant operations. They first took us into the Balkans, so Bosnia; then, a couple of years after Bosnia, 1989, Kosovo where, by the way, we still are with about 5,000 troops in Kosovo. A few years after Kosovo, 2001, the 9/11 attacks in New York and Washington led us to our largest ever, longest ever combat operation for NATO, the ISAF mission, which just concluded its combat phase in December 2014. The end of that combat phase in Afghanistan really marks the beginning of the end of that operational period.

During that period, from 1989 to sort of now, there were at least two other things that were very important that were happening. Yes, we were doing non-stop operations. We were also doing enlargement. All of you are here today as Allies, not as opponents because Estonia, Latvia, and Lithuania all took the national decisions to join the Alliance. Your three countries were joined by nine others, so in the course of that 25-year period we went from 16 members to 28.

People miss the fact that while we were operating very hard during that 25-year period, we were also expanding NATO’s influence, and 12 European nations chose to join.

Furthermore, beyond those 12, another 40 nations became NATO partners–12 new members and 40 partners. All of that happened in this last 25 years.

What’s probably most curious about our list of partners today is that Russia is one of those 40 partners, with whom over the last two decades or so, we formed a cooperative relationship. I remember when, in 1995, U.S. troops went in to Bosnia with NATO and with Russia. There was a Russian brigade working in the U.S. sector in Bosnia. Several years later, I commanded U.S. forces in Kosovo and I had a Russian airborne battalion working for me.

This cooperative relationship during this 25-year period went all the way to include operations alongside Russia, U.S.-Russian forces operating. And beyond just operations in the field, we talked about all sorts of things in those 25 years.  Counter-terrorism cooperation, counter-narcotics operation, transport in and out of Afghanistan, I’ve spoken to Russian generals during that 25-year period about their experiences in Afghanistan and what we might learn from those experiences so we don’t learn the same lessons.

That period, the last 25 years, featured operations, membership for 12, and partnership for 40. However — and now I want to make the key point here — I think we might be at the end of that 25 year period.

First of all, because on the operational front, the combat operations in Afghanistan are over. It ended on December 31, just a couple of months ago, and we’re now into a much smaller scale and much more refined scope of the mission.
It’s a non-combat mission and it only does training, advising, assisting of the Afghans. So Americans, Germans, French, Italians, Brits, are no longer walking patrol, we’re no longer conducting counter-insurgency operations, the Afghans are, and we’re simply helping them be as good as they can be.

At the same time, however, we see right on NATO’s doorstep, a series of crises that has really gotten the Alliance’s attention over the last year, and maybe these crises combined mark this phase line that I’m discussing.  Maybe we’re moving into phase three.

What crises am I referring to?  Most prominently for us is the crisis in the east with Russian illegal annexation of first Crimea, and now its continuing efforts to destabilize Southeastern Ukraine.

While NATO is not running operations in Iraq and Syria, all 28 Allies are participating in the international coalition.

You’ve also got crisis in the Southeast. If that were not enough, and you come around a little further, directly to the south of NATO, across the Mediterranean, in northern Africa, you can see a whole range of problem areas.  And most particular, the most dire problem is Libya, which is a crumbling state at war with itself and with the potential to spread instability by way of extremist fighters by way of weapons by way of illegal immigration well beyond the borders of Libya itself.  Quite frankly, if you were to look south of Libya you’d see another complete arc of instability, that runs from Northern Nigeria all the way through Somalia. If you step back from the map and look at NATO’s space, you see not only to the east, but to the southeast and the south, what we refer to as an arc of instability, a range of instability that has really gotten NATO’s attention.

So what is NATO doing about this? That has to do with the Readiness Action Plan. I wanted to leave you with the idea that as your visit to NATO here in early 2015 takes place, you may be visiting at a point where  – a couple of years from now –  we will look back and say, 2014, 2015, we really moved into a new phase because historically, as I look back on the Alliance, that’s my sense of where we are. You’re not only in an interesting place here at the U.S. Mission to NATO, but you’re also perhaps, if my theory is correct, you’re visiting at an interesting time.