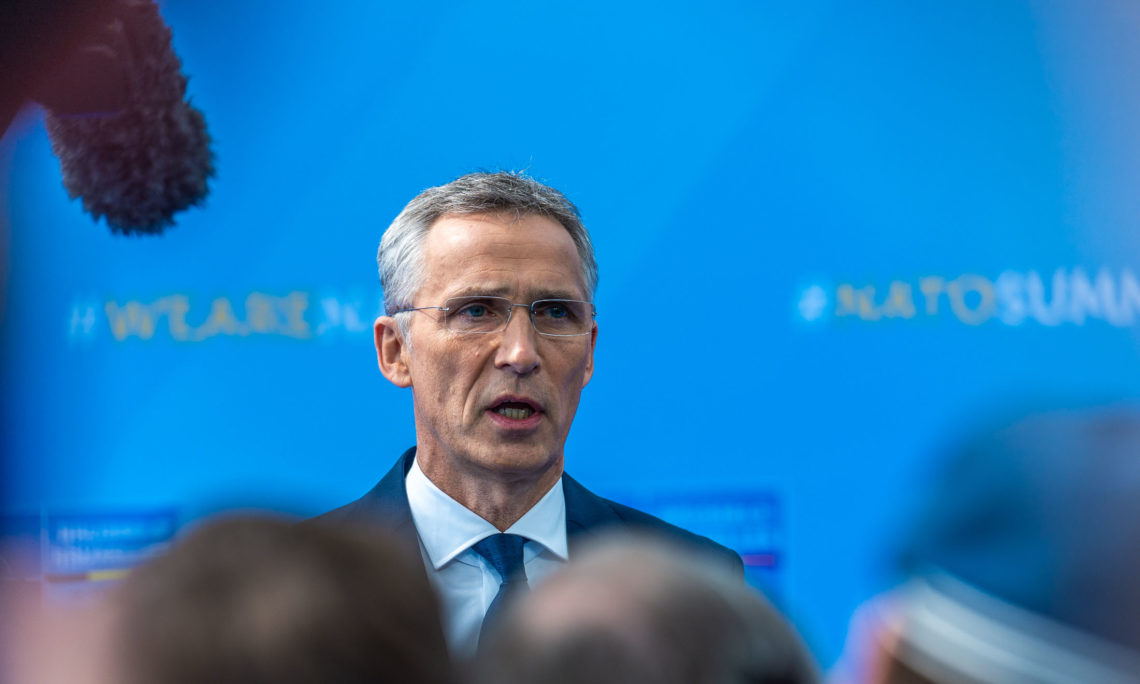 at the start of the NATO Summit Brussels

I’m looking forward to welcoming the Heads of State and Government and also the leaders of our partner nations, to the NATO Summit which starts in just a few hours. And all NATO Summits matter of course but the Summit today and tomorrow is of particular importance because we are faced with unprecedented security challenges and threats, and at the same time we see differences, disagreements between Allies. So it’s very important that this Summit shows that NATO delivers, that we are able to do more together, all 29 Allies, North-America and Europe. And I’m confident that despite discussions, disagreements, we will decide and we will deliver. Meaning that we will deliver on how to strengthen our collective defence with high readiness of our troops. We will deliver on stepping up the efforts to fight terrorism with a new training mission in Iraq and more support for the Afghan security forces. And we will also deliver when it comes to making sure that NATO is always fit for purpose by modernizing our Command Structure, establishing new two commands, one in Norfolk, Virginia, and one in Ulm, in Germany. But perhaps most important, we will also deliver when it comes to burden-sharing, defence spending. Because after decades where Allies were cutting defence budgets by hundreds of billions of dollars and euros we are seeing now that they are adding billions of euros to their defence budgets. So we see that last year we had the biggest increase in our defence spending across Europe and Canada, in a generation, we see that all Allies have started to increase defence spending and based on the national plans we have agreed to develop last year, we estimate that European Allies and Canada will add 266 billion US dollars to the defence budgets from now until 2024. So we are moving in the right direction. And a strong NATO is important for Europe but is also important for the United States and therefore it is important that we show that this Summit, despite differences on different issues is able to agree and deliver on strengthening NATO as a corner stone of transatlantic unity.

Question: Mr Stoltenberg, how confident are you that President Trump won’t…[inaudible]

Question: How could you describe your breakfast meeting with President Trump?

Jens Stoltenberg [NATO Secretary General]: It was a meeting where President Trump and I addressed the topics we will discuss during our Summit today.  Of course, President Trump has a very direct language and message on defence spending, but fundamentally we all agree.  All Allies agree that we need fairer burden sharing in the Alliance, and that’s exactly why all Allies agreed that those who are spending less than 2% have to spend more, and that’s exactly what we have started to do.  Because we have turned a corner, after years of cutting defence budgets, all Allies have now started to increase and we had the biggest increase in defence spending across Europe and Canada last year and more Allies spent 2% of GDP on defence.

So, I expect open and frank discussions about defence spending during our Summit, but I also expect that they will recommit to that Allies have to spend more and also that we will recognise the progress we have started to make on defence spending.
(overspeaking)

Question: President Trump blew off the G7 Summit in Canada at the last minute.  How confident are you… are you confident that he won’t do the same here?  And if so, why?

Jens Stoltenberg [NATO Secretary General]: So, I expect open and frank discussions.  And there are disagreements on different issues, some of them not directly related to NATO, like trade or climate change, but also some of them related to NATO, like for instance defence spending.  But despite those disagreements, I expect that we will agree on the fundamentals: that we are stronger together than apart; that NATO has to be strong to protect all Allies; and that we will deliver on strengthening our collective defence.  Meaning that US troops, Canadian troops, European troops, are going to do more together and that we are going to deliver, for instance, on stepping up the fight against terrorism with a new training mission in Iraq.  So, when it comes to substance, when it comes to the decisions we are going to make, I am confident that we will make good decisions, showing that NATO is delivering.

Question: Secretary General, President Trump said during the meeting that Germany would [inaudible]
Jens Stoltenberg [NATO Secretary General]: First of alls on Germany, there are different views on the Nord Stream pipeline.  That’s well known.  It’s not for NATO to decide, this is a national decision.  But NATO has of course addressed also energy security, because we understand there is a relationship between energy and security matters.  We have highlighted the importance of diversification of supplies, to make sure that our energy systems are resilient, and I think also investments in renewables is actually decreasing the dependence on imported energy.  But on the Nord Stream issue, there are different views and I don’t think… it’s not for me to solve that issue. It’s something that is outside the NATO framework to address this.

Jens Stoltenberg [NATO Secretary General]: Well, I met the President several times and we are used to having open and frank, and good and constructive discussions, and I think that’s important for the Alliance, that we can meet, discuss and address a lot of different issues.
(overspeaking)

Question: Secretary General, do you follow [the World Cup in Russia and who would you like to win?]

Jens Stoltenberg [NATO Secretary General]: I think that, representing 29 nations, I will not pick any specific team I will like to see win.  My own home country, Norway, didn’t qualify, so that’s not a big challenge for me to… how shall I say… to decide which country I will support, since Norway is not represented.

Jens Stoltenberg [NATO Secretary General]: The message to Taliban is that we will stay, we will continue to provide support for the Afghan national security forces.  We are not in Afghanistan any longer in a combat mission, we are there in a mission to train, assist and advise the Afghan forces.  Because we strongly believe that the best way to stabilise Afghanistan is to enable the Afghans themselves to stabilise their own country and to fight terrorism themselves.  And therefore, we continue to provide support, training, and also funding for the Afghan national security forces.  And the message to the Taliban is that they will not win on the battlefield.  We will continue to support the Afghan security forces.  They have to sit down at the negotiating table.  And the message is that they will not win at the battlefield, therefore they will obtain more sitting down and negotiating with the Ghani government.  And we welcome the initiative by the Ghani government to unconditioned peace talks.  We welcome also the ceasefire we saw some weeks ago.  Yeah.

Jens Stoltenberg [NATO Secretary General]: We have increased our military presence in the Baltic countries and Poland already.  We have four battlegroups, one in each of the Baltic countries and one in Poland.  There is also some bilateral presence of the US.  So, this shows that NATO is adapting, that NATO is responding.  We have the four battlegroups, but we have also increased our ability to reinforce.  So, NATO deterrence and NATO defence is of course partly based on the forces we have already there, the national forces, the multinational NATO forces, but also on our ability to quickly move in more forces if needed.  And that exactly what we are addressing at this Summit.  We are increasing the readiness of our forces with what we call the readiness initiative; 30 new battalions, 30 new air squadrons, 30 battleships, ready to move within 30 days or less, or to be used within 30 days or less.  Military mobility and also the tripling of the size of the NATO Response Force, all of that is about our ability to move forces quickly across Europe, if needed.

Question: Canadian Prime Minister said we have new proposal to training Iraqi forces [inaudible] Are you agreeing with him?

Jens Stoltenberg [NATO Secretary General]: Yes.  So, I look forward to meeting Prime Minister al-Abadi.  He will come to the Summit and also to… he will meet at… also at the meeting of the Global Coalition to Defeat ISIS, which will be on the margins of our Summit.  And I expect that Heads of State and Government will agree to launch a training mission for Iraq, a NATO training mission for Iraq, where the plan is to train their forces, but also to establish military schools, to enable to Iraqis to make sure that Daesh, ISIS, is not able to come back.

Question: There will be [inaudible] delegation today?

Question: There be [inaudible] delegation also with al-Abadi today?

Jens Stoltenberg [NATO Secretary General]: I don’t know what kind of delegation he is bringing with him, but the thing is that he will come here and he will meet NATO leaders in the framework of the Global Coalition to Defeat ISIS.

Question: Could you please tell us what is the state of play with the hub for the South and Joint Command Naples, please?

Jens Stoltenberg [NATO Secretary General]: Well, the hub for the South will be declared fully operational and the hub is important because it creates a platform for us to access and to analyse and to follow and to work and address the challenges we see emanating from the South, and I am grateful for Italy hosting not only the Command we have in Naples, the Joint Force Command, but also the hub for the South.

Question: Mr Secretary General, can I ask a question on burden sharing?  Is there any indication that at this Summit, the leaders will change the commitment made in 2014 on defence spending?  In particular, the wording then was, “All Allies would move towards 2% of GDP goal within a decade, i.e., by 2024”.  President Trump has misrepresented that [inaudible] and implied that requires everyone to spend at least 2% now.  Is there any question of this being tweaked?

Jens Stoltenberg [NATO Secretary General]: I expect leaders to recommit to our commitment to increase defence spending.  And the good news is that that’s exactly what we have started to do.  All Allies have started to increase and more Allies spend 2% of GDP on defence.  This year, we expect eight Allies to spend 2% of GDP on defence.  Back in 2014, it was only three Allies.  And the majority of Allies have put forward plans on how to reach 2% within a decade.  Burden sharing is about money, cash, but it is also about contributions and capabilities.  And the good thing is that the increased defence spending is put to good use, investing in new equipment, but also in new and strengthening NATO contributions and operations, for instance in fighting terrorism.