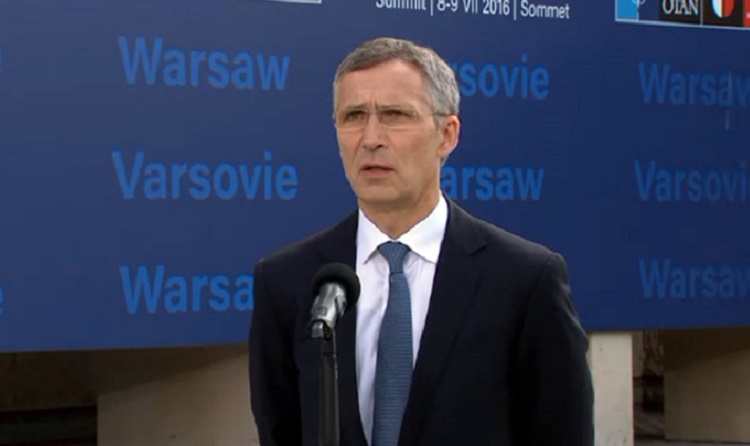 Secretary General’s Doorstep at the Start of the Warsaw Summit
July 8, 2016

Good morning,
The Warsaw Summit will be a land mark summit. We meet at a time which is decisive for our shared security. And NATO will once again send a very clear message that we are here to protect and defend all Allies in a new and more challenging security environment. The two main themes of the Summit are deterrence, defense and projecting stability to our neighborhood. Strong defense and strong deterrence is the core task of NATO.

And we are adapting the Alliance to new threats and new challenges. We will make important decisions at the Summit on how to strengthen our defence and deterrence. We will decide to increase our forward presence in the eastern part of the Alliance with four new battalions, multinational robust battalions and they will send a clear message that an attack on one Ally will be an attack on the whole Alliance. And we will also increase our presence in the south-eastern part of the Alliance, with tailored multinational presence.

NATO doesn’t seek confrontation, we don’t want a new Cold War. The Cold War is history, and it should remain history. But we have to be able also in a more challenging security environment to defend and protect all our Allies.

We will continue to strive for a meaningful and constructive dialogue with Russia. That is important to reduce risks, to increase predictability and to enhance transparency and that is particularly important in times like these.

We will also address how we can project stability to our neighbourhood. Because if our neighbours are stable we are secure. We will step up our support for the international coalition fighting ISIL. I expect the Heads of State and Government to make decisions on support of NATO AWACS surveillance planes. Make decisions on training of Iraqi officers. And also to expand our presence in the Mediterranean, building on our success we have in the Aegean Sea working with the EU, Turkey and Greece.

We will also address many other issues like Afghanistan, Ukraine but I will also mention that here in Warsaw I will sign later on today a declaration with the two Presidents of the European Union. President Tusk and President Juncker and that is an important political platform for further strengthening the cooperation between NATO and the EU. That has been important for a long time, but it is increasingly important when we see the challenges evolving around us so we are looking into how we can step up the cooperation with the EU in areas like answers to hybrid threats, cyber threats and also maritime cooperation and building capacity.

So this will be a landmark summit and the decisions we are going to take together will once again confirm that Europe and North-America stand together, act together, to protect all Allies against any threats.

With that I’m ready for your questions.

QUESTION (PAP): Mr Secretary General, you said about reinforcement of the eastern flank. Can you provide any details about those 4 battalions? Is it enough? Will there be any reinforcement in future?

We have tripled the size of the NATO Response Force to 40,000 troops with a Spearhead Force at its core able to move within a matter of days. We have set up small new headquarters in Poland and other countries in the eastern part of the Alliance which are important for planning, for exercises, but also to facilitate reinforcements if needed. And we have also decided to have more pre-positioned equipment and supplies, and also to have more exercises, sped up our decision-making. So we have done a lot of different things.

QUESTION (Reuters): Secretary General, how can relations with Russia be repaired, between Russia and the West? What needs to happen? Thank you.

SECRETARY GENERAL: Our relationship with Russia is based on the idea of strong defense, strong deterrence combined with dialogue. And we are going to make decisions on how we strengthen our defense and deterrence. But we will also convey a very, very clear message – we will continue to strive for constructive dialogue with Russia. And I believe that this approach with defense and dialogue is the only viable long-term approach to Russia.

And I appreciate very much that the Alliance stands united behind this approach. We are united in our efforts to increase our defence and deterrence, but we are also united in our efforts to strengthen the dialogue with Russia. And we will have a meeting of the NATO-Russia Council next week, where we will discuss Ukraine, military activity, transparency, risk reduction, and also Afghanistan.

And I think that just to address issues like military activity, risk reduction is important. Because we have seen increased military activity around our borders. Enhanced risk of incidents and accidents. We saw the downing of the Russian plane, and we have to avoid that kinds of incidents and accidents. And that’s the reason why we are also so focused on risk reductions, transparency, to do exactly that.

QUESTION: Mr Secretary General, can you comment on the Dallas shooting? How can NATO help governments to face this kind of internal threat?

SECRETARY GENERAL: I would like to express my condolences to those who lost loved ones, to their families. These are tragic events, which are still evolving. It is for US authorities to deal with them. And my main message today, especially because it’s too early to say exactly what’s behind, why it happened, is to convey condolences to those who lost their loved ones.

QUESTION (Russian State TV): NATO is coming closer and closer to Russian borders. So it looks like NATO is aggressive, not Russia. And do you really believe that Russia can attack Poland or any other European country? Thanks a lot.

SECRETARY GENERAL: Poland, the Baltic countries, they are sovereign, independent nations and they have decided by democratic decisions to join NATO. Those decisions are decisions which, of course, NATO respects, that’s the reason why they are members. And we have welcomed them as members of the Alliance. And they are contributing a lot to our Alliance.

It’s their sovereign right to decide their own path, including what kind of security arrangements they want to be part of. We are increasing our military presence in the Baltic countries and Poland, but there is no doubt that is something we do as a response to what Russia did in Ukraine.

No-one talked about any military presence of the kind we now see in Poland and the Baltic countries before Ukraine, before the illegal annexation of Crimea.

What we do is defensive, it is proportionate, and it’s fully in line with our international commitments. And it is no way something that justifies any reactions from Russia. Because it is in all ways defensive measures from the NATO side.

We have seen a more assertive Russia. We have seen a Russia which has been willing to use military force against sovereign nations in Europe. With aggressive actions against Ukraine, the illegal annexation of Crimea. And that’s the reason, the main reason, why we are now increasing our military presence in the eastern part of the Alliance.

QUESTION (Ariana News): Mr Secretary General, what should Afghanistan expect from the Summit? A Russian security advisor has said during a press conference in Kabul that Afghanistan will request NATO to bring pressure on Pakistan. What’s your response on this?

Second, I expect them to make decisions on continued funding of the national Afghan forces.

And I thirdly, I expect the Heads of State and Government also to reconfirm our long-term political partnership, cooperation with Afghanistan.

All these three strands of work are important for us helping Afghanistan stabilise in securing their own country, also to fight terrorism in Afghanistan and prevent Afghanistan from once again becoming a safe haven for international terrorists.