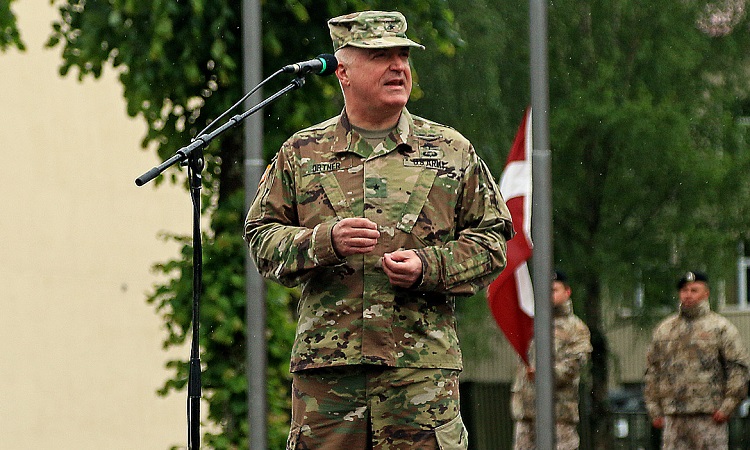 On behalf of Lieutenant General Hodges, thank you for being here today to celebrate the conclusion of this outstanding exercise.

Saber Strike is an exercise that is meant to build interoperability and cooperation between our militaries and our nations.  13 nations participated in this exercise, learning to work and fight together.  But the experiences built over these weeks go well beyond that.

Every Soldier from every nation I spoke with described with admiration and respect the other Soldiers they had trained with.  The challenges they had overcome together, and the excitement of integrating the ground maneuver, indirect fire and air support that was integrated into the FTX’s.  You have trained together, suffered together, and sweat together — and been rained on, and rained on — together.  But you have overcome obstacles together and built a fighting team that can fight together, against any adversary.

Each Saber Strike exercise has added new capabilities, new systems or new procedures.  This year was no different for Estonia.  This included a 2200 kilometer movement by the 2nd Cavalry Regiment ending here in Tapa.  A movement that demonstrated NATO’s ability to come to the aid of its members.  The first use of the HIMARS rocket system, both here during Saber Strike and in Estonia.  The inclusion of new air assets including B-52 strategic bomber support, A-10 attack aircraft, and for the first time in 32 years, a highway landing by those very same A-10s.  And it happened here in Estonia.

As we continue to work together and develop greater skills, we not only prepare for our collective defense, but we develop our ability to respond to emergencies and disasters that may befall any one of our nations.  We learn to work together and trust each other.  To better know and understand our individual capabilities, but to also know and understand the capabilities of our allies and friends.  But the greatest achievement is this trust.

I can say without a doubt that Saber Strike has been a great success.  We have built trusted relationships, many of which will last forever.  When we see each other on the battlefield, wherever and whenever that may be, we will know we can count on each other.  Today, no nation fights its battles alone.  You will not fight yours alone.  We have proved that ability these past weeks.  We can and will depend on each other.

Thank you and STRONG EUROPE.