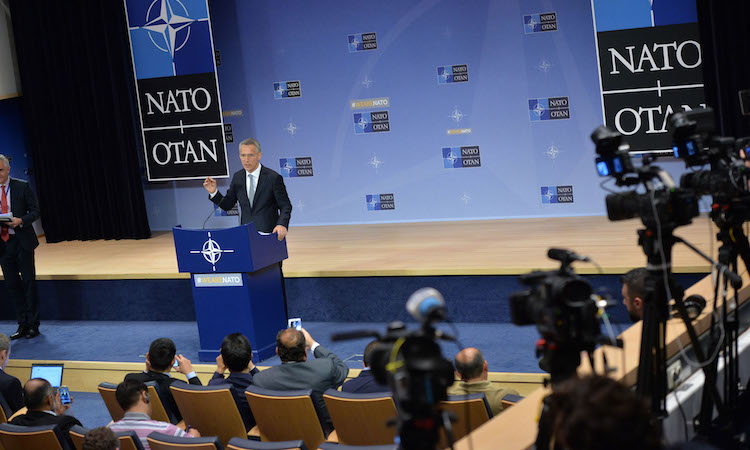 We have just finished talks about the future of the Resolute Support Mission in Afghanistan. Our work in Afghanistan remains a truly international effort. 39 Allies and partners are working with the Afghans to help them make their country more secure and to prevent it from ever again becoming a safe haven for international terrorists. Over the years, we have achieved hard-won gains in Afghanistan and many of our women and men have paid the ultimate price. We will always honour their service and sacrifice.

Today, Afghan security forces are fully responsible for security across the country. Every day they demonstrate bravery and resilience, leading the fight to defeat terrorists and protect their people. This has allowed us to shift from a large-scale combat force of over 100,000 NATO troops to our current training mission of around 13,000. But the security situation on the ground remains extremely challenging. We have recently seen brutal attacks in Kabul. In recent months, hundreds of innocent civilians have been killed. This is exactly why our presence is so important. So today, we reconfirmed our enduring commitment to Afghanistan. We will sustain our Resolute Support Mission beyond 2017.

In support of Afghanistan’s four-year roadmap for addressing key military shortfalls. Our military authorities have requested a few thousand more troops for the Mission and today, I can confirm that we will increase our presence in Afghanistan. At a force generation conference earlier this month, fifteen nations pledged additional contributions to Resolute Support. We also got some more announcements and pledges during the meeting today. We will also continue funding the Afghan Security Forces through 2020 and we will continue to strengthen our political partnership and practical cooperation with Afghanistan. But NATO alone cannot bring lasting security to Afghanistan.

We count on our Afghan partners to make good on their commitments, including: key reforms on good governance and the rule of law, fighting corruption and protecting the rights of women and girls. Together we are determined to build on the progress we have made and together we will preserve the gains we have fought so hard to achieve. Because Afghanistan’s security is our security.

And with that, I’m ready to take your questions.

Moderator: And when you ask questions, please just say the outlet that you’re representing. Yes please, the gentleman in the second line.

Q: Thank you very much, Mr. Secretary General. I’m Sharif Hassanyar working for Ariana News Afghanistan TV station. Insecurity is rising in Afghanistan. There are serious questions about the way the Afghan government conducts the operation inside Afghanistan and are you happy with what has been done so far?

Having said that, of course, there is room for improvements. There are areas where we can strengthen further the capacity, the professionalism and the capabilities of the Afghan forces and that’s exactly why we now are aiming at doubling the number of special operation forces to our train, assist and advise program. That’s exactly why we’re going to provide, help Afghanistan to provide key enablers like, for instance, more advanced vector air forces both with more pilots and also with new airframes. And that’s exactly why we are going to strengthen further the education capacity, the military academies, to improve leadership in the Afghan army including addressing the fight against terrorism. So yes, they have proven capable but yes, there is room for further improvement.

Moderator: The gentleman in the first row.

Q: Nasim Shafaq from Radio Free Europe/Radio Liberty. Let us believe that the major source of insecurity in Afghanistan is the terrorist sanctuaries inside of Pakistan. Beside sending more troops to Afghanistan, does NATO have a plan to put pressure on Pakistan to close those sanctuaries?

Jens Stoltenberg: It is absolutely unacceptable that a country provides sanctuary to terrorist groups which are responsible for terrorist attacks inside another country and the only way to achieve lasting peace is to have a regional approach and that is also one of the reasons why I welcome so much the new initiative by President Ghani, the Kabul process where he invited many nations, countries from the region, to sit down and discuss how can we make progress in the peace process which includes also countries in the region. NATO has regular engagements with Pakistan, military dialogue and political dialogue and of course, NATO and many NATO allies and especially the United States have addressed several times the importance also of addressing the sanctuaries of terrorist groups, the Taliban, the Al Qaeda network in Pakistan. So that has to be addressed as part of the solution to the conflict and the problems in Afghanistan.

Moderator: This gentleman in the second row

Q: Mr. Secretary General, thank you. Channel 24, Kiev. As far as we know, the Ukrainian Minister of Defence is here in Brussels and he has obviously been discussing Ukrainian participation in the Afghan mission. Could you please be more specific on what has been agreed upon and how important is Ukrainian assistance? Thank you.
Jens Stoltenberg: The Ukrainian Defence Minister, Minister Poltorak, he participated in the meeting. He reconfirmed, of course, the strong support of Ukraine to Afghanistan, to the Resolute Support Mission.

We are grateful for the support and we are now in the midst of a force generation conference. I’m not able to go into the specific numbers. We will be more precise on the specific troop levels, both from different countries and the total numbers later on but what I can say is that NATO will remain in Afghanistan and we’re going to increase our presence and we’re grateful for Ukraine being a nation which, or a country which has contributed to our efforts in Afghanistan over a long period. And I have met Mr. Polltorak several times and I’ve expressed my gratitude to him.

Moderator: Yes, the gentleman in the front row.

Q: Khurshid TV. Mr. Secretary General, some weeks ago, one of the key ministers by the name of … [inaudible], the guy who was appointed for countering the corruption and level of our forces, especially in the level of interim ministry and ministry of defence, he resigned and as we know, corruption is the biggest problem in the security sector of Afghanistan. So what is NATO’s plan to fight against corruption and also to bring a tight reform in these two areas actually?

Jens Stoltenberg: Corruption is a very serious strategic security threat to Afghanistan. That’s one of the main reasons why Afghanistan still is struggling with instability, violence and with insurgency and terrorist groups. So therefore on top of our agenda when it comes to reforms, modernizing the defence and security institutions of Afghanistan is exactly fighting corruption. So when we do capacity building, when we help to modernize and reform the security institutions in Afghanistan, our train, assist and advise mission, it’s very much about creating institutions, creating the mechanisms, creating the law enforcement tools that enables us to support the Afghans in fighting corruption. It’s not easy, it’s extremely hard and extremely difficult but we have to continue to be very focused and very vigilant in the fight against terrorism. I welcome the progress we have seen but I also, of course, expressed my concern that corruption is still a big problem in Afghanistan.

Moderator: We have time for one more question, the gentleman in the third row.

Q: Secretary General, Noureddine Fridhi from Alarabiya News Channel. The Prime Minister of Iraq, Mr. Haider al-Abadi, announced this afternoon that the defeat of Daesh and that the Iraqi army captured the famous mosque where al-Abadi announced three years before his state of … [inaudible]. I would like to ask your comment on this and how the defeat of Daesh may impact the NATO strategy towards Iraq? Thank you.

Jens Stoltenberg: NATO supports the coalition to defeat Daesh or ISIS and we have supported the coalition for a long time and we have just become a full member of the coalition. The plan and or course the purpose of the military operations in Iraq has always been to defeat ISIS, Daesh, and to also liberate Mosul as part of that. But the main focus of NATO is not on the high end combat operations which are taking place for instance in Mosul. The main focus of NATO has been to build capacity to train Iraqi forces so when Daesh is defeated, when Mosul is liberated, then we need capable Iraqi forces, which can keep Daesh down and can create conditions for stability and a peaceful development in Iraq. And that’s exactly why we are now working on how we can help them to modernize their Minister of Defence, how we can help them with reforming and modernizing security institutions and also training Iraqi officers and forces. So some of the officers we have trained have participated in the liberation of Mosul because they have been trained in counter-IED but we really think that NATO’s role in Iraq goes beyond the liberation of Mosul and actually beyond the immediate defeat of Daesh or ISIS.

Moderator: Ladies and gentleman, thank you very much.

Jens Stoltenberg: Thank you so much.