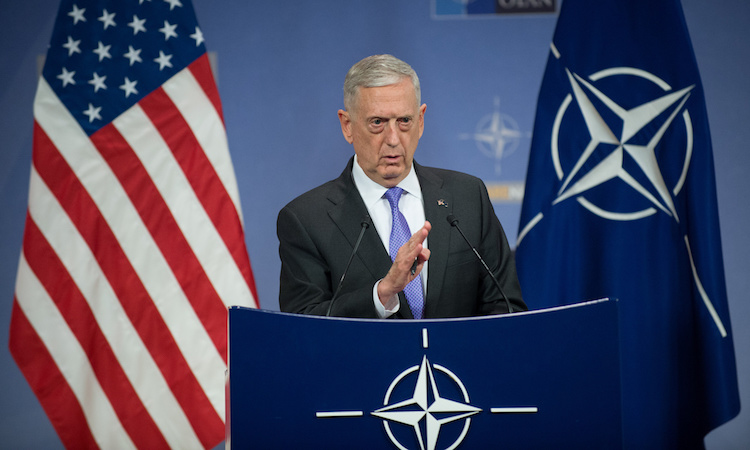 SECRETARY OF DEFENSE JIM MATTIS: Well, good evening, ladies and gentlemen. And thanks for staying late tonight so we could talk.

As you know, we’ve just completed the NATO defense ministerial here in Brussels. And we discussed threats to the security situation. And by threats, I mean from the east and from the south — the threats manifested from Russia and the threats from terrorism.

Our focus was heavily on adapting NATO to these circumstances, both institutionally and in the short term as well, what we have to do right away. And we focused on counterterrorism and Russia’s destabilizing activities both in cyberspace and on the ground.

We spent a fair amount of time on NATO’s enhanced forward presence operations, and those, as most of you know, are in Estonia, Latvia, Lithuania and Poland. Those are the four host nations. The nations that are framework nations that are in each one of those nations are Canada, the United Kingdom, Germany and the United States. And around their battle groups, then other nations, upwards of 15 of them, have already contributed forces that are added to each of those framework nations in each of the four host nations.

And I’ve observed some of these troops in the field. It is really quite energizing to see young soldiers from across the NATO alliance working together in the forests of Lithuania and elsewhere in the Baltic region as they make clear in a fully defensive orientation that we stand united and together.

And I bring this up because this wholly defensive deployment shows a truly united NATO — united in its estimate or what we would call appreciation assessment of the security situation. But more than united in understanding it, they’re also united in how they react to it. When you put your troops on the ground under other nations’ command there in the forest, you’re making a statement of unity at that point.

I would also just note that NATO’s defense budgets increased again this year, just like they did last year, enabling the alliance to further enhance its deterrent posture both in terms of here at home, and certainly in terms of how it deals with the threats that they were looking at elsewhere outside the region, in northern Africa, for example, and across — over into Afghanistan.

An example of America’s commitment to NATO, to article five, beyond what the president said with Romanian President Iohannis during his visit to Washington a little over a week ago, was certainly the Senate voting 100 to zero, a unanimous reaffirmation of America reaffirming article five of the NATO Treaty.

I would add to it that in terms of European security, what we have is a budget request by President Trump that raises our budget for the European Reassurance Initiative by $1.4 billion this year over last year. That’s a statement of where the American government is putting — is putting its money. And I say that at a time when many of our government agencies are being reduced in their budgets, we are increasing our budget in support of NATO and specifically in support of the European Reassurance Initiative.

So that’s — that’s a pretty big statement right there of where we place our priorities.

On Afghanistan, we discussed the situation in the meetings today. I also had a number of bilateral meetings with various NATO nations and partner nations, not just NATO alliance members, about what it is they’re doing on the ground; what gaps we still have in terms of our approved, what we call, statement of requirements. In other words, we’ve all agreed this is a requirement. And then we have to fill those requirements.

We still have a few gaps and nations are stepping up. We filled 70 percent of those gaps right now, and I’m very, very optimistic that based on what I heard here, we’ll be filling the rest.

I needed to talk to the allies here and partners here. And then our chairman of the joint chiefs earlier this week was in Afghanistan. Based on what I picked up here, and when I return to Washington and talk to the chairman, I’ll finalize my recommendations on the strategy going forward to take to President Trump as we determine what our government strategy will be.

That decision will be made, obviously, by our president. It will be informed by what I picked up here from our allies, from our military commanders in the field. And then at that point, once the strategy is decided upon, then it will be up to all of us to execute it to the best of our ability. And we will refine the U.S. troop numbers at that time, within that framework accordingly.

So, thank you. And I will take your questions.

You mentioned that you spoke to a lot of allies today about their troop commitments and about the ongoing strategy. The U.S. and its allies have been at war in Afghanistan for 16 years now. Do you believe that there are a lot of new ideas out there that you can talk about and implement in the strategy?

And specifically, you also mentioned the 70 percent. Do you believe — you said you were optimistic — do you think that you will get all the commitments that you think you’re going to need?

SEC. MATTIS: Well, we’re work out the commitments. Certainly, you never step in the same stream twice. By that I mean that what the war was doing 15 years ago is not what it’s doing today. Looking back on it, it’s pretty much a consensus that we may have pulled our troops out too rapidly, reduced the numbers a little too rapidly. But the difference today is that the Afghan army is actually able to carry the fight, and they’ve been carrying the fight for some time now.

So, there’s always new ideas you can come up with. That’s — there’s never a lack of those. There’s new opportunities and certainly the political will is there to carry this fight forward.

Q: Thank you. (Inaudible) from the Spanish News Agency — (inaudible).

Sir, by when do you think that it’s reasonable for the U.S. and NATO to take a decision on final numbers for Afghanistan? I mean, given that the situation on the ground is very difficult.

SEC. MATTIS: Given that the what?

Q: The situation on the ground is very difficult with the — (inaudible) — of the insurgents.

SEC. MATTIS: I mean, we’ll take the decision when we believe we have the right information, have fleshed it out sufficiently. I think the point you’re making, though, is a good one. In other words, what — what tells you the time is right to take the decision? And what we do is we figure out what it is that we need to do to carry out the assigned mission.

The mission has been confirmed. And now we have to lay out diplomatic, economic, military, education — there’s all sorts of lines of effort. So as we look at each of those, we make certain, number one, they are aligned so they’re all going for the same objective; and number two, they’re mutually reinforcing. And at that point, you can parse out what it is that’s not being done, and you — you simply fill in the gaps at that point.

The gaps may be intellectual, they may be numeric, they may be changes of — of tactics — just pure military tactics. There may have to be something completely non-military done in order to — to make this go forward. But you basically look at aligning each one of your — your major efforts there.

You heard the secretary general earlier talking about the counter-corruption effort, for example. That would be a — a prime example of what you would have to change along the lines of his assessment.

Last month, or in May, the DNI testified that the situation on the ground in Afghanistan will likely deteriorate through 2018 despite a modest increase in U.S. and — and NATO forces. And I wonder if you agree with that assessment. And if so, how do you justify NATO commitments that were made to you by (today ?)?

And I guess lastly — I mean, we’ve — we’ve been doing this for a while. And I just wonder when do you see it ending? I mean, how long is this fight going to be?

SEC. MATTIS: Yeah, I — I don’t put timelines on wars. It’s that simple.

War is a fundamentally unpredictable phenomenon. And every effort to try to create a pat answer to something like that is probably going to fail.

So, at that point, you have got to align your effort, align your resources, and put the right people in charge, and you keep going. You can’t say, “Well, I — I got tired of it, so I’m going to come home,” and then wonder why you get hit again.

We’ve all seen the results of leaving ungoverned areas. You see it coming out of Syria where ISIS has attacked this very town from Syria.

It’s not like you can declare a war over, or want it over, or say, “I’m going to quit,” and you’re not going to pay a price for it.

So, the most important answer to that is what is the price of not fighting this war? And in that case, we’re not willing to pay that price.

Q: And on the DNI assessment, sir?

Q: Mr. Secretary, are you satisfied the new capabilities that NATO approved today for its forces going forward will be enough to deter Russia?

And do you — are you — do you think NATO allies will put their new money that is being spent on defense toward developing new capabilities that can match the — the Russian investment in their military?

Q: Yeah, I’m — I’m talking about the NATO policy planning and the — the long-term plan for building up allied forces in Europe.

I believe strongly that they’ve identified the — the correct places that we have got to improve, create capabilities, maybe just expand them. But everything from cyber to addressing the nuclear deterrent, I’m very comfortable that we have the right discussions today and we’re focused in the right area.

I have no doubt, because of the clarity that you see in today’s assessment of the situation and, more importantly, the response where people have actually put their troops up into the — that area, I don’t think you would see that absent of pretty strong conviction that the gaps have been identified, and there’s a sense of urgency to start addressing them.

And when you look at the — now we’re into several years of increased budgets by NATO, you see nations having to come to grips with the fact that Russia’s not going to be the partner that perhaps we wished it would be back in the 1990s, at least not in the near future. So they are reacting specifically to that — that assessment.

So, yes, I’m absolutely convinced we’re on the right track.

SEC. MATTIS: Thank you very much.