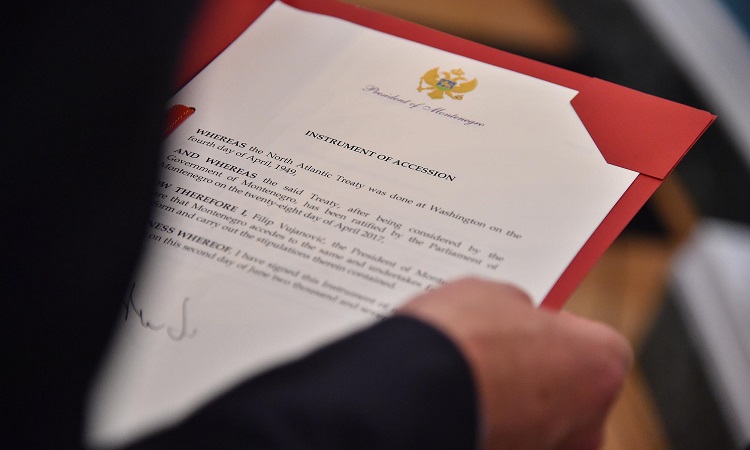 Thomas A. Shannon, Jr., Under Secretary for Political Affairs

UNDER SECRETARY SHANNON: Thank you very much, John. And good morning and welcome to all of you to the Department of State and to the Treaty Room. John indicated the dignitaries we have here today, and we’re delighted to have all of you here. So many have you have played such an important role in reaching this important date. And as was noted by the foreign minister and by the ambassador, this is many years in coming. So this has been – like building a cathedral, this has been a process in which many people have played an important role.

But we want to extend an especially warm welcome to NATO Secretary General Stoltenberg. Thank you, sir, for being here today. And obviously, to Montenegro’s leaders, to its Prime Minister Markovic, to its Foreign Minister Darmanovic, to Monenegro’s ambassador here in the United States, to our ambassador in Montenegro. And to those of us, some who can’t be here today but would have liked to, people like Toria Nuland, people like Sandy Vershbow. I don’t know if Doug Lute is here today, but if so, these are people who played very important roles in this. But to our guests from NATO and from Montenegro, I want to thank you here. You do us great honor with your presence.

Over decades, the promise of NATO membership and broader Euro-Atlantic integration has advanced our security, our democratic values, and our respect for the rule of law. It has served as an incentive for nations to pursue difficult reforms. This policy has yielded clear results, and that is why NATO allies unanimously agreed to welcome Montenegro into the alliance.

Montenegro has taken NATO’s guidance and mentorship to heart and implemented meaningful reforms including force structure transformation and modernization and upgrading operational capabilities. We greatly appreciate that Montenegro takes seriously the financial commitment will undertake with NATO membership.

On May 25, NATO leaders met in Brussels and agreed that allies should develop national plans by the end of the year for implementing the 2014 Wales pledge to aim to reach 2 percent of GDP towards defense spending and 20 percent of defense budgets on necessary capabilities by 2024. Montenegro is on track to allocate 1.72 percent of its GDP in 2017, and its long-term defense development plan envisions reaching 2 percent by 2024.

Montenegro has been a reliable partner and force provider to NATO, the EU, and UN missions. It has contributed to NATO’s operations in Afghanistan for six years and contributed over $1 million in the last two years towards the sustainability of Afghan security forces.

We also appreciate that Montenegro has been an active contributor to the 67-member defeat ISIS coalition. All NATO allies are members of the coalition, and on May 25, NATO leaders agreed that NATO would formally join the coalition and that NATO would do more in the fight against international terrorism. Montenegro should be commended in particular for asserting its sovereign right to choose its own alliances even in the face of concerted foreign pressure. As President Trump said in his February 28th remarks to a joint session of Congress, “America respects the right of all nations to chart their own path.”

Montenegro’s accession sends a strong message of strength to the region and makes clear to our allies that the United States remains as committed as ever to the principle of collective defense as enshrined in Article 5 of the Washington Treaty. In a strong demonstration of U.S. support for Montenegro’s membership, the U.S. Senate voted overwhelmingly, 97-2, on March 28 to ratify Montenegro’s accession protocol.

NATO’s strength is based on not only on its military might, but also on our allies’ shared commitment to the fundamental values enshrined in the Washington Treaty, democracy, individual liberty, and the rule of law. Montenegro’s accession also affirms to other aspiring members that NATO’s doors remain open to those countries willing and able to make the reforms necessary to meet NATO’s high standards, and to accept the risks and responsibilities as well as the benefits of membership. Montenegro’s accession is an important stepping stone toward our vision of a Europe whole, free, and at peace.

Thank you all again for joining us here today. Thank you.

MODERATOR: Foreign Minister Darmanovic will now present the instrument of accession to Under Secretary Shannon.

(The instrument was presented.)

MODERATOR: And now I’d like to introduce Prime Minister of Montenegro Markovic.

PRIME MINISTER MARKOVIC: (Via interpreter) Dear Deputy Secretary of State, dear Secretary-General, excellencies, ladies and gentlemen, dear friends and allies, today is a big day for Montenegro, a day when my country is becoming a NATO ally. That is a historic event for a country and a nation which endured enormous sacrifices in the 19th and 20th centuries in order to defend their right to a free life, the right to decide on our own future, the right to be recognized by the world under our own name, and with our national symbols.

History has shown us that when we say Montenegro, these are the phrases that cross our mind: “the smallest country and an enormous sacrifice.” Nearly a hundred years after it was deleted from the political map of Europe and at the end of the World War I and 11 years since restoration of its independence, Montenegro is again a part of global politics. We are celebrating today the fact that it will never happen again that someone else decides instead of us and our state, behind our back, as it was the case in the past.

Today, we are also formally becoming a part of the most powerful and most successful alliance in history which decides on the most important issues of today’s world. Membership in NATO means permanent stability for us with Euro-Atlantic democratic values embedded in the society and economy geared towards further prosperity.

Allow me to extend my gratitude to our host country, the United States of America, gratitude to President Trump, to the Senate, for the staunch and continuous support for our membership in NATO, gratitude to Vice President Pence, Secretary Tillerson, and the entire State Department, who have been very helpful throughout this entire process in enabling us to be at this place today. I’m also grateful to all of you who are here today to share our satisfaction.

From the moment of reinstatement of our relations back in 2006, the United States has been a staunch, reliable, and precious partner of Montenegro in achieving the vision of a Euro-Atlantic and European country. This is also confirmation of something that has never been questioned – that Americans remain committed to the stability and security of the Western Balkans and Europe. We are very grateful to the NATO and esteemed secretary-general who is with us today.

Dear Mr. Stoltenberg, dear Jens, you have been actively supporting us all this time with vision and friendly advice. Montenegro will know how to prove that it is a trustworthy partner.

As an ally, Montenegro will continue working, reinvigorated towards that goal, so as to reach the standard of 2 percent allocations for the defense budget by 2024 and to develop a national plan by the end of this year, because we believe that equitable burden-sharing is important for the functioning of the alliance. We will be contributing to NATO deterrence and defense policy, counterterrorism, projecting stability, as well as to overseas operations and missions. We will be a strong advocate and partner in the alliance’s refocusing on the Western Balkans and further integration of the countries of the region into NATO.

I firmly believe that this is a historic day for NATO too. Facing the new and grave challenges, the alliance’s admitting the 29th member show increasingly that the open-door policy is alive and that it works well as a beacon of hope to all of those who want to share its values and standards.

Ladies and gentlemen, since this day, June the 5th, 2017, we are an ally that will enjoy the benefits provided by the collective system of security with major responsibility to continue together with you unwaveringly and committedly to work towards durable peace, stability, and security of Europe and the world. This is a task that will be passed on to the next generations.

Allow me to send a message to the citizens of my country from this place: Let us unite and let us seize this opportunity to make Montenegro a country where people will live better lives with even higher level of democracy, rule of law, and equal opportunities for all. We primarily owe it to ourselves, but we also owe it to our allies who understood and supported, acknowledged, and accepted a small Balkan country as an equal partner. Let us be wise for the sake of our future as much as we were brave in our heroic past.

May Montenegro be eternal, may our alliance be eternal. Thank you. (Applause.)

SECRETARY-GENERAL STOLTENBERG: John, thank you so much. Prime Minister Markovic, Under Secretary Shannon, excellencies, ambassadors, ladies and gentlemen, in April 1949, just a short distance from here, the 12 founding members of NATO Alliance signed the Washington Treaty. At that ceremony, President Truman said, “In this pact, we hope to create a shield against aggression and the fear of aggression – a bulwark which will permit us to get on with the real business of government and society, the business of achieving a fuller and happier life for all our citizens.”

Since then, NATO’s shield has been extended to cover 28 – now 29 nations in Europe and North America, enabling almost a billion people to live that fuller and happier life. We are an alliance of democracies and we have at times different political perspectives, but together, we rise above those differences and unite around a common purpose: to stand with each other, to protect each other, and, if necessary, to fight to defend each other. Article 5, our collective defense pledge, is the core of our alliance – a unique bond that has kept our nations safe for almost seven decades. Today, our commitment to the alliance is as strong as ever, not just in words but also in deeds. We see a stronger U.S. military presence in Europe, and Europe and Canada investing more in defense.

Today, Montenegro joins NATO with a seat at the table as an equal, with an equal voice in shaping our alliance and its independence guaranteed. In turn, NATO benefits from Montenegro’s insight into the Western Balkans and the professionalism, bravery, and dedication of its men and women in uniform – troops who serve with our Resolute Support mission in Afghanistan. Montenegro’s accession is good for Montenegro. It is also good for the stability of the Western Balkans, and it’s good for international peace and security.

Since NATO’s founding, keeping our door open to new members has been one of our greatest contributions to international peace and security. Montenegro’s accession sends a signal to other states that seek membership that if a country truly reforms, if it promotes democracy, strengthen the rule of law, modernizes its armed forces, and contributes to our collective defense, it too can join the alliance.

Sixty-seven years ago, President Truman said that people with courage, ambition can still determine their own destiny. Today, Montenegro has determined its own destiny to join NATO and to follow the path of freedom and peace.

So I congratulate you, Prime Minister Markovic. (Speaks in Montenegrin.) (Applause.) Welcome, Montenegro.