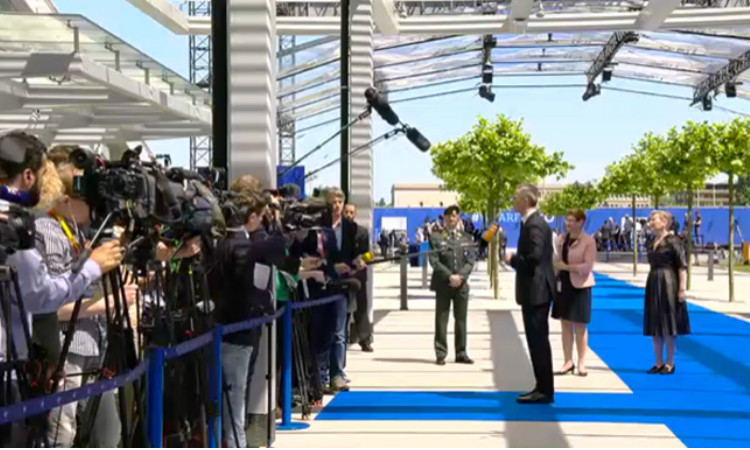 Upon Arrival at the New NATO Headquarters

I am looking forward to welcoming NATO leaders to the meeting here today. This will be the first ever meeting at this new Headquarters  and we will have a ceremony where Belgium is going to hand over the new building to NATO.

And we are also going to unveil two memorials, expressing our core values: freedom and solidarity. And President Trump will unveil a memorial with a piece from the Twin Towers, an Article 5, 9/11 memorial. And then Chancellor Merkel will unveil a memorial with a piece of the Berlin Wall. Showing the importance of NATO’s role in both contributing to ending the Cold War in a peaceful way, but also NATO’s role in fighting terrorism and our collective defence.

Then the meeting will start and we will address two main topics: fighting terrorism and burden-sharing. We will agree on an action plan on NATO’s role in stepping up our efforts in the fight against terrorism and we will agree on national plans making sure that we keep up the momentum on burden-sharing, investing in our defence. And this is important because this is a defining moment for our security and then we need a strong Alliance, a strong transatlantic bond.​

SECRETARY GENERAL: All NATO Allies are already members of the Coalition. And there there’s been no call, no request for any NATO combat role. And I think that NATO’s focus should be on how can we train, how we can build local capacity. Because when Mosul is liberated, we have to make sure that there are forces there who can have control and that can make sure that terrorists are not coming back.

The importance of NATO joining the Coalition is partly that it sends a strong political signal about unity in the fight against terrorism. And partly it provides a platform for enhancing our practical support. We are going to provide more AWACS support, our surveillance planes. More flying time, more information sharing. And also air-to-air refuelling. This is important for the Coalition operations against ISIL. We will also provide more support when it comes to information-sharing. And we are now establishing an information cell on terrorism here at NATO headquarters to make sure that we are stepping up our efforts when it comes to sharing information related to the fight against terrorism.

SECRETARY GENERAL: It means that all Allies have to implement what all Allies agreed back in 2014. Then 28 Allies… Well, we all agreed on 3 steps: we agreed on stopping the cuts; we agreed on gradually increasing, and the move towards spending 2% of GDP within a decade. The good news is that we have really turned a corner. Because in 2015 – the first year after we made the pledge – total defence spending across Europe and Canada was for the first time not reduced, but in fact we had a small increase. Then in 2016 we saw a significant increase in defence spending, also because of that Germany was investing more in defence. And we have started to move towards spending 2% of GDP on defence.