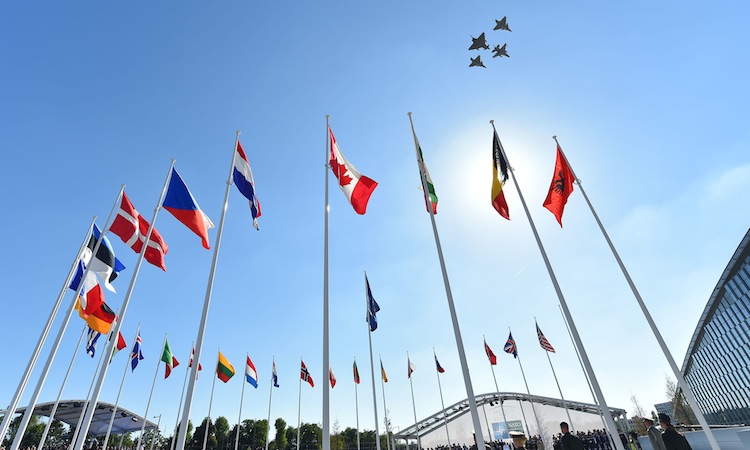 Following the Meeting of NATO Heads of State and/or Government

Good evening. It’s good to see you at such a late hour.

We have just concluded a very good meeting of NATO Heads of State and Government. We took important decisions on burden sharing, and stepping up the fight against terrorism. Belgium handed over to NATO our new headquarters – a 21st century home for a 21st century Alliance. Chancellor Merkel dedicated the Berlin Wall Memorial, a symbol of our freedom, which NATO exists to defend. President Trump dedicated the 9/11 and Article 5 Memorial.

A powerful reminder of NATO solidarity and the importance of our common fight against terrorism.

One of the main issues we discussed was the fight against terrorism. This fight requires a wide range of instruments: national law enforcement agencies, the coalition to defeat ISIS, the European Union, as well as Allies individually, are all making invaluable contributions. Today we agreed an action plan for NATO to step up its efforts in the fight against terrorism.

We reviewed our training mission in Afghanistan, and we agreed that we will continue to sustain our mission. I welcome that several Allies came forward today with new troop contributions. And on the basis of our review, we will take further decisions in the coming weeks.

We also decided to expand our support to the Global Coalition to Defeat ISIS. Our AWACS surveillance planes will help improve airspace management for the Coalition. And several Allies have committed air-to-air refuelling capabilities for those AWACS. So we will share more information, there will be more flying hours and we will also have air-to-air refueling. At the same time, we agreed that NATO will become a full member of the Global Coalition, in which all 28 Allies already take part. Being in the coalition does not mean that NATO will engage in combat. But it does send a strong signal of our commitment to fight global terrorism. And it will enable NATO to take part in political deliberations, including on the coordination of training and capacity building.

We will continue our training for Iraqi forces. Iraqi troops trained by NATO to defuse improvised explosive devices are, right now, putting their skills to use in the battle for Mosul. We also decided to establish a terrorism intelligence cell within our new Intelligence Division. This will improve the sharing of information among Allies. Including on the threat of foreign fighters. Work is also underway to establish a Hub for the South at our Joint Force Command in Naples. It will constantly monitor and assess regional threats, including terrorism.

We are also looking into making greater use of NATO’s Special Operations Headquarters, which already offers tailored counter-terrorism training for Allies and partners. This could involve more mobile training teams deploying to countries at risk.

So the Alliance is doing a lot in the fight against terrorism. That is why I have decided to designate a senior NATO official as coordinator, to ensure that our new action plan is implemented swiftly and effectively. To keep our nations safe in a more unpredictable world, we need to continue investing in our defence. And to ensure fairer burden-sharing across the Alliance. This was the other main theme we discussed. We have already made progress. With billions more invested in defence last year, after a long period of decline. Today, we decided to develop annual national plans, setting out how Allies intend to meet the defence investment pledge we made together in 2014.The national plans will cover three major areas: cash, capabilities, and contributions.

First – how nations intend to meet their commitment to spend 2% of GDP on defence, of which 20% should be invested in major equipment.

Second – how to invest additional funding in key military capabilities that we need.

And third – how Allies intend to contribute to NATO missions, operations and other engagements.  I welcome that many Allies set out tonight how they intend to meet these goals. The first set of reports on national plans will be completed by December this year. And will be reviewed by defence ministers in February. The annual national plans will help us keep up the momentum, to invest more and better in our defence. So that all Allies contribute their fair share to our common security.

NATO’s relationship with Russia was another topic of discussion. Today we reaffirmed our dual-track approach: strong defence, combined with meaningful dialogue, and we are delivering on both tracks. Allies stand strong together not to provoke a conflict, but to prevent a conflict and to preserve peace. At the same time, we remain open to dialogue with Russia, to increase transparency and reduce risks.

We welcomed Prime Minister Marković of Montenegro to our table today. Montenegro will become the twenty-ninth member of our family in just a few weeks. A clear sign that NATO’s door remains open to nations which share our values and wish to contribute to the most successful alliance in history.

Finally, we agreed that we will meet again at a NATO Summit in 2018.

The decisions we have taken today will make the Alliance stronger and safer as we continue to adapt to new challenges.

And with that I’m ready to take your questions.