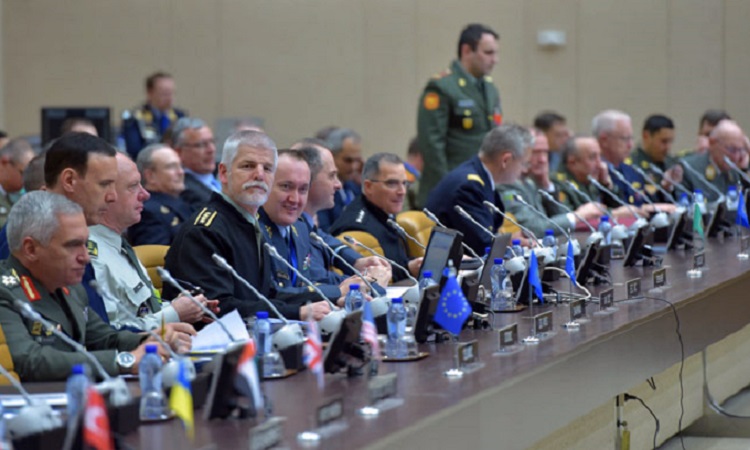 On 17 and 18 January 2017, the NATO Chiefs of Defence gathered for the 176th Military Committee in Chiefs of Defence Session (MCCS) at NATO Headquarters in Brussels. The meetings included discussions on improving NATO’s Command Structure, continuing defence & deterrence measures, projecting stability through Counter Terrorism projects and the continued support of the Resolute Support Mission. NATO Chiefs of Defence also met with Partner Nations to share views on regional security and enhanced cooperation. The MCCS concluded with a session dedicated to Russia and its relationship towards NATO.

For the first time this year, the NATO Chiefs of Defence (CHoDs) met for the triannual Military Committee in Chiefs of Defence Session (MCCS). The two-day meeting was an opportunity for CHoDs to discuss ongoing strands of work and additional military guidance on key areas to be provided ahead of Defence Ministers Meetings in February. “During these meetings, CHoDs will agree on a common interpretation of the recent evolution in the security environment, we will take stock of the progress made on deterrence and defence related work and reflect on ways to optimise these projects”, General Petr Pavel, Chairman of the NATO Military Committee, stated during his Opening Remarks.

While the focus of the MCCS was on NATO’s posture and continued adaptation, a significant part of the meetings was dedicated to projecting stability outside NATO’s borders and the importance of maintaining and enhancing partnerships.

During the RESOLUTE SUPPORT Session, the CHoDs commended the Afghan National Defence and Security Forces (ANDSF) for the work they are doing to protect and defend the Afghan people with determination and courage, acknowledging the ongoing challenges and casualties suffered. “It is important to work with Afghanistan to encourage all regional actors to play a constructive role and find a lasting solution. This is the best way to fight terrorism, stabilize and support the unity of Afghanistan”, added General Pavel.

Meeting with the Mediterranean Dialogue and Interoperability Platform Partners allowed CHoDs on both sides to reiterate the importance of mutual understanding in practical military cooperation while also emphasizing the need to respect the individual requirement of each nation. General Pavel highlighted that “we need to increase the effectiveness of our partnership programmes via the Individual Tailored Roadmaps and augment interoperability between NATO and Partners. Holistic approaches that bring together military, political and economic efforts will enables us to respond more effectively”.

Ukraine and Georgia were also able to share their perspectives on their own regional security situations and provide national updates in dedicated sessions. The Ukrainian CHoD, General Muzhenko went onto brief the NATO CHoDs on the current state of affairs of the Urkainian Armed Forces and the progress in Defence Reforms. Meanwhile, the Georgian CHoD, General Chachibaia presented a status update on the Substantial NATO Georgia Package.

The last meeting was dedicated to Russia and its relationship to NATO. “The CHoDs highlighted Russia increased assertiveness and encouraged me to continue to explore options for a meaningful dialogue with General Gerasimov”, remarked General Pavel.