Secretary Austin addresses the media after the DefMin 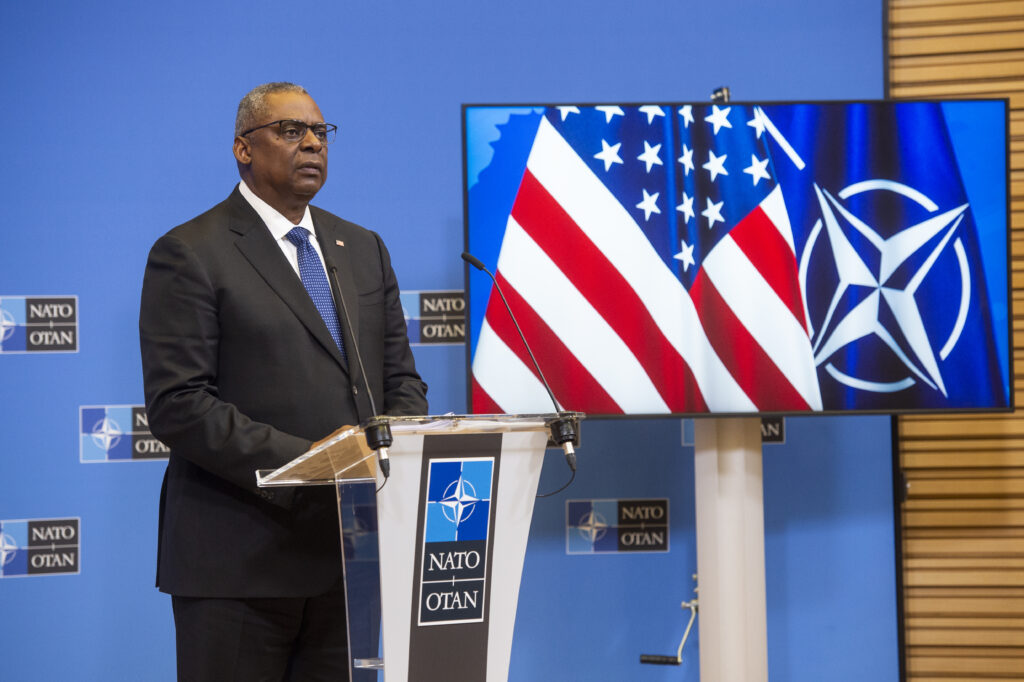 SECRETARY OF DEFENSE LLOYD J. AUSTIN III: Well, good afternoon, everyone. It’s always good to be back at NATO. I’d like to thank Secretary General Stoltenberg for hosting this defense ministerial and for his tremendous leadership during this critical time.

And that’s just what this Alliance has done since Russia’s indefensible invasion of Ukraine, and we have had to face events that we all hoped would never come to pass. And this Alliance has met the challenge with determination, with resolve, and above all, with unity. Together, we have responded swiftly and decisively to Russia’s baseless and lawless and reckless invasion of Ukraine. NATO has shown the world that it remains the essential forum for consultation, decision, and action on transatlantic security.

We are all proud to stand with the brave people of Ukraine as they defend themselves and their democracy and their sovereignty. And during this enormous crisis in European security, we’re proud to stand together to strengthen the rules-based international order that protects us all.

Our work together is indispensable, and these ministerials are invaluable. It’s an opportunity to consult with one another and to share ideas and to ensure that the Alliance is prepared to face the challenges of today and tomorrow.

Together, we have risen to the challenge of Putin’s war of choice, and Russia’s assault on transatlantic security. Our Allies have activated NATO’s defense plans. They’ve deployed elements of the NATO Response Force and they’ve placed tens of thousands of troops in the eastern areas of the Alliance, along with significant air and naval assets under the direct command of NATO and supported by Allies’ national deployments.

And NATO is also making plans to strengthen its deterrence and defense posture for the longer-term, especially along the eastern flank. Over two highly-productive days, this ministerial has laid the groundwork for important discussions and decisions at the NATO Summit in Madrid later this month.

Now, NATO is also close to welcoming two new members to the Alliance, and Finland and Sweden have made the historic decisions to apply for membership, and that reflects the appeal of NATO’s core values. The values that unite us as an Alliance remain strong and timeless, and so does our shared vision of a stronger rules-based international order and a more peaceful world.

I am deeply proud of the progress that we’ve made over the past several months, and now the good work must continue. And during our time together, I’ve encouraged my fellow ministers to do even more, and we all share the responsibility to procure, prepare, and provide ready capabilities and forces to prepare this Alliance for the challenges to come.

NATO’s preeminent task has not changed, to defend each and every Ally’s sovereignty, territorial integrity, and independence. And that’s why America’s commitment to NATO and to Article 5 remains iron-clad.

Thank you for being here today. And I’m happy to take a couple of questions.

Q: Thanks a lot. (inaudible)from Frankfurter Allgemeine Zeitung. Mr. Secretary, the reinforcements that NATO Allies are considering regarding the Eastern flank seems to be along the concept of scalable brigades. So this means that NATO member states will rely heavily on their ability to quickly move forces to theater when it’s necessary. We all know about shortcomings in logistics and weapons supplies over the previous years.

And I’m just wondering how confident are you that NATO member states will be up to the task, and will in fact be able to fulfill this requirement if need be? Thank you.

SEC. AUSTIN: Well, thanks. I am confident. I have confidence in the process and the ability of our Allies to build the capabilities that we agreed to — that we all need. You know, when I looked around the room in our meetings there, and I saw the commitment and the energy in that room and you know, I was — it was heartening. It was encouraging.

As you heard the Secretary General mentioned earlier, there are things that we can do and will do to make sure that it’s a lot easier to rapidly-deploy forces forward. Some of those things include pre-positioning of equipment, putting forces that are at home station on higher levels of alert, streamlining command-and-control so that it’s easier to fall in on a formation.

So, recognizing the challenges of the past, I think, you know, all of our allies have learned from any shortcomings that we may have experienced in the past. And they’ll build to ensure that they have the right capabilities to provide flexible and responsible and combat-credible forces when the time comes.

Q: Mr. Secretary, you talked about the support of NATO behind the cause of Ukraine. It’s relatively easy, by and large, to unite NATO governments, but how do you keep the NATO public engaged when many, including in the U.S., are already more concerned about the high costs of fuel and inflation than they are about what’s happening in the Donbas region?

How fragile is public support for this, as it drags on?

SEC. AUSTIN: Well, certainly, making sure that the public — that the people of each of our countries in the Alliance remain engaged. I’m confident that our leaders will do the right thing to address their constituents.

You know, as we come together and talk about complex issues, you know, we can be assured from time to time that there will be differences of opinion, but that’s why we have these meetings, to make sure that we — you know, we really wring things out and entertain any questions or issues that various countries may have so that they can go back and work with their constituents and make sure that, you know, people really understand where the Alliance is going and what it needs.

And I have confidence that in every case, we’ll be able to reach consensus and move forward. We’ve done that in the past; I certainly saw evidence of that here in this meeting and in other meetings. But that’s why we have these meetings. That’s why we come together.

Q: Thank you very much. I have two brief questions. The first is, could you update us more specifically on your thinking on what kind of extra support the U.S. might offer Eastern NATO allies? And the second question is, what assistance is the U.S. providing Ukrainians trying to repair Javelins? Thank you.

SEC. AUSTIN: Well, I don’t have any announcements to make today. I would say that, you know, as you look back at what’s happened since the 24th of February, members of the Alliance have really stepped up. We rapidly deployed capability to the eastern flank in order to reassure our Allies that, you know, we’re ready to defend every inch of NATO’s territory. So if you look at the things, the increase in force posture, since that time, you know, it’s been impressive. And so that’s kind of reassuring when we look at the future and what we need to do in the future to make sure that we have that combat-credible capability. I feel very good about us being able to work together to ensure that we have what we need.

You heard the Secretary General say earlier that what we’re really focused on is not just numbers of boots on the ground; we’re really focused on total capability, so capability in air, land, sea and cyber and space. And you know, as we look at putting that together- and you heard me say a couple minutes ago that there are things that we’re also looking at in terms of pre-positioning of equipment, you know, streamlining command-and-control, making sure that — you know, that we have our balance and footprint about right. There are number of things that we’re going to be working on going forward, but that’s — that is still a work in progress, and you know, I expect that at the Madrid Summit we’ll see senior leaders make announcements based upon the recommendations from the ministers and the things that we’ve worked out here.

STAFF: We have time for just one more. Jim Garamone from the Defense Media Activity.

Q: Mr. Secretary, the Secretary General mentioned that China was a — and your — of discussion during the meetings. You just came from the Shangri-La and from the Asia-Pacific. How did you see that conversation going?

Q: In the meetings about China and the strategic concept.

So we’ve seen a number of countries that are members of this Alliance operate in the Indo-Pacific, some in conjunction with us and other countries like Australia and Japan. And so there are clearly a number of countries who have direct interest in the Indo-Pacific. But the Alliance as a whole, as you’ve heard the Secretary General say, has — is interested and is — and will stay — will pay attention to what’s going on in the region.

But again, Jim, if you just kind of look at the importance of all those countries out there, it’s a — my view, it’s the right thing to do and it’s the same view that our Allies have, as well, so —

STAFF: Thank you, everyone.

SEC. AUSTIN: Thanks, everybody, and I’ll see you on the next ministerial or at the summit.