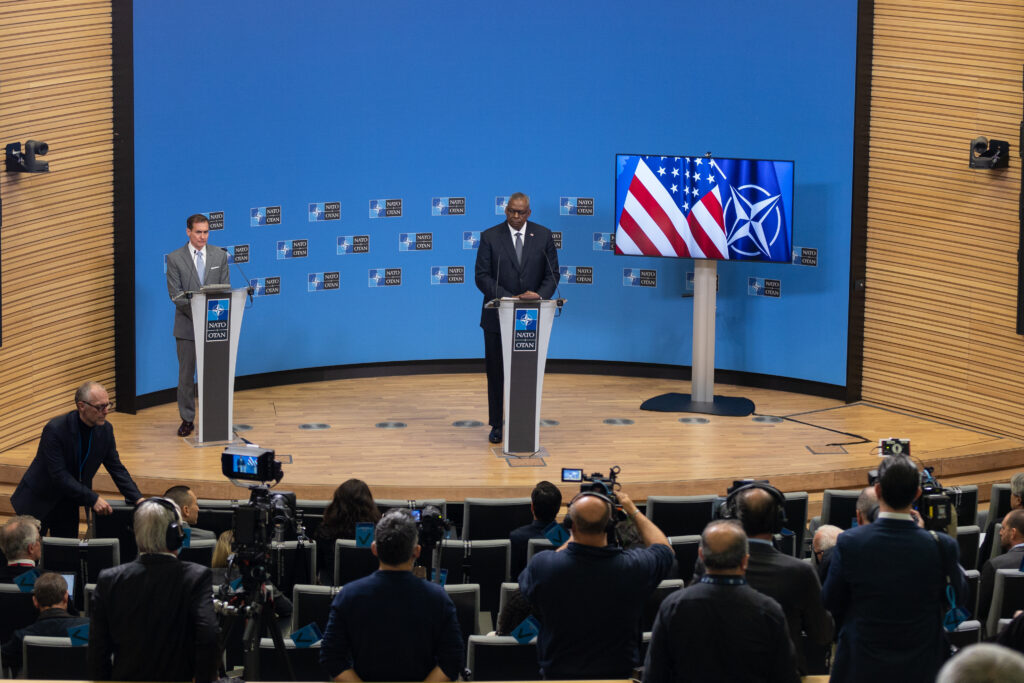 Let me start by thanking Secretary General Stoltenberg for hosting this NATO (North Atlantic Treaty Organization) Defense Ministerial.  I’m glad that we’re able to gather in person here in Brussels with all 30 Ministers of Defense.

NATO remains the essential forum for consultation, decision-making and action on transatlantic security and defense issues and our meetings this week only reinforce that point.

NATO’s strength doesn’t come just from its military might, it comes from its unity and its sense of common purpose.  So let me underscore that America’s commitment to Article 5 remains ironclad.  As President Biden has said, we take it as a sacred obligation and we’re committed to working with our allies to ensure that NATO is ready to face the future.

Our countries face an increasingly complex security environment so this alliance is opening a new chapter in the transatlantic relationship.

To that end we talked about several key issues including developing and maintaining credible deterrence and defense.  And that is NATO’s number one job and it requires all of our fellow allies to share in that responsibility and to procure, prepare and provide capabilities and forces that are ready and have the resources that they need.

We also discussed NATO’s role after the end of our mission in Afghanistan.

As a veteran of the Afghan war I’m especially grateful for the contributions and the sacrifices of our NATO allies.  And as we move forward we are determined to apply some lessons to NATO’s current and future operations to ensure that we can most effectively use our collective strengths.

And finally, we had productive conversations with some of our most capable and stalwart partners on our collective efforts to preserve transatlantic security.

And later this afternoon we’ll also convene a restricted meeting of our top military contributors to the Defeat ISIS Global Coalition.  And that will be an important opportunity for us all to consult on ongoing operations in Iraq and Syria as well as new and emerging threats that face us all such as ISIS-Khorasan.

Now as many of you know, the North Atlantic Defense Committee met for the first time in 1949 at the Pentagon.  And at that ministerial my predecessor, Secretary of Defense Louis Johnson, said that they had gathered to strengthen the ramparts of peace.  That’s what NATO has always done, and that’s what it’s going to continue to do.

We face threats and challenges that pose new questions for the alliance, but we will always be stronger tackling them together and consulting together and working together.

NATO remains the strongest alliance in history because it unites countries that share powerful values and it continues to serve as a vast force multiplier for our individual capabilities and strengths.

The Euro-Atlantic area is most secure when we work together through NATO so today I want to reiterate America’s resolute commitment to NATO and our NATO allies.

I’m looking forward to working with Secretary General Stoltenberg and my fellow Defense Ministers to ensure that NATO remains the unparalleled collective security organization.  And we’re going to keep working together to strengthen the ramparts of peace.

Media:  Hi.  Mr. Secretary, you frequently talk about how China is your pacing threat and we know you came to this ministerial intending to raise it in various points even though there was no dedicated ministerial session to that subject.  But we’ve seen no consensus between member states on any China-specific policy.  So what is the goal?  And why does it seem so difficult to get there?

And while we’re on the subject of China, will the United States defend Taiwan if attacked by Beijing?

Secretary Austin:  I think that was two or three questions. But do I get to choose which one I answer, or OK?  [Laughter].

So, regarding China, let me just say that, I said it in my opening comments, that alliances like NATO is one of our greatest strengths.  No other country enjoys the types of alliances and partnerships that we do.

I think you remember that back in 2019 at a leaders meeting, NATO allies publicly declared for the first time the need to address the risks posed by China.  And, at the summit in June we elaborated on ways that China’s ambitions and behavior present challenges to a rules-based international order.  So we’ve seen increasing interest in our allies and partners to ensure that they engage our partners in the Indo-Pacific and work with our partners to ensure that we collectively work to ensure that the Indo-Pacific area, or region, remains free and open, and the international rules-based order remains in place here.

And so, you’ve also seen recently that NATO issued a NAC (North Atlantic Council) statement on maligned Chinese cyber behavior.  So there’s increasing interest in checking that kind of behavior, but also to build resilience throughout our own infrastructure.

OK, so that’s the China question.

And, your Afghanistan question was?

Media:  It was Taiwan.

Secretary Austin:  And the Taiwan question was?

Media:  Will the U.S. defend Taiwan if attacked by Beijing?

Secretary Austin:  Well, nobody wants to see cross-strait issues come to blows, certainly not President Biden, and there’s no reason that it should.  You’ve heard us say this a number of times, and I’ll say it again.  We remain committed to our One China Policy, in keeping with the Taiwan Relations Act, the Three Assurances and the six communiques.*

As we’ve done over multiple administrations, we’ll continue to help Taiwan with the sorts of capabilities that it needs to defend itself, and so we’ll stay focused on those things.  And I won’t engage in any hypotheticals with respect to Taiwan.

Moderator:  The next question comes from David Herszenhorn, Politico.

On partnership with the, your European allies, the President in his phone call with President Macron; and Jake Sullivan when he visited here in Brussels just a few days ago said that the U.S. is now prepared to support European allies as they develop some independent capabilities that would complementary to NATO.

And I wonder if you might see some value in taking an active effort in that.  Encouraging them, suggesting capabilities that might be complementary.  Maybe you can give us some examples of capabilities that you think they ought to have that they don’t yet, and why that may not have developed so far.  Do they need a little bit of help maybe would you be willing to provide it in developing such capabilities.  Thanks.

Secretary Austin:  I’ll allow the EU (European Union) to prescribe or outline the capabilities that they think they need.

I would just say that we certainly support a stronger and more capable European defense, and one that contributes positively to the transatlantic and global security that’s compatible with NATO.

And what we’d like to see is, we’d like to see initiatives that are complementary to the types of things that NATO is doing.  So we see hopefully these two organizations working together to enhance security in the region and ensure that that transatlantic bond remains strong.

Media:  Mr. Secretary, you just mentioned lessons learned in Afghanistan but the conflict remains ongoing.  Thousands of Afghan commandos are at this moment scared and hiding in safe houses across the country.  The Biden administration has promised to get them out, promises were made.  Why are they being left behind?

Secretary Austin:  I think you know, Lucas, that we continue to work to ensure that those people who have helped us have the opportunity to leave the country if they so desire.  We evacuated initially some 124,000 people out of Afghanistan in 17 days and we were able to do that because we had great help from our coalition partners in this coalition and others, and it was a great example of teamwork.

We continue to work together to ensure that we facilitate the departure of people who want to leave, and we not only do that but we help resettle people into different places.  Our NATO allies have been very, very instrumental in that as well.

I think you know that we had a number of allies step up very early on and allow us to set up intermediate staging bases in Europe.  And quite frankly, that was a great example of the strength of our partners and our alliances.  And so we remain grateful.  We remain sighted on this issue and will continue to work to get out those people who have helped us.  We do have a moral responsibility to work as hard and as long as we can to ensure that we help those people.

Media:  Mr. Secretary, the Afghans you just mentioned, were these civilians, not Afghan commandos.  U.S. forces have been out of Afghanistan now for almost two months.  What’s taking so long?

Secretary Austin:  Well, as I said, we’re not finished.  We’ll continue our work and so we’ll work as hard and as long as we need to take care of as many people as we possibly can.

Media:  Thanks very much, Mr. Secretary.  As you’re surely aware, over the last few weeks there’s been a serious deterioration in relations between NATO and Russia with Russia closing its mission here after NATO kicked out officials accusing them of spying.  So do you believe that the conversation, for example, between Presidents Biden and Putin back in June was effective in passing the message that this kind of behavior is not acceptable?  Do you think deterrence against Russian aggression is working?

Secretary Austin:  I think what President Biden wants out of any kind of relationship with Russia is predictability and stability.  And I think with nations like ours, I think that’s very, very important.

I think you know, you just saw me visit a number of countries in the Black Sea region, and those were very, very good visits.

Moderator:  Thank you very much.  That’s all the time we have today.