Secretary Antony J. Blinken at a Press Availability at the NATO Ministerial in Riga, Latvia
By U.S. Mission to NATO
11 MINUTE READ 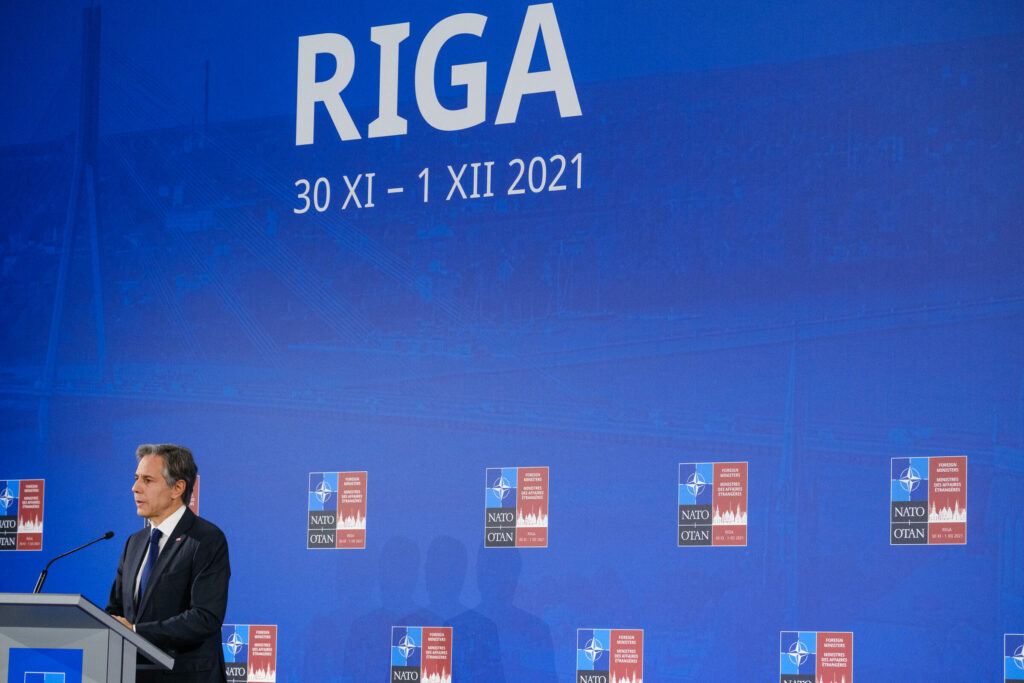 SECRETARY BLINKEN:  Good afternoon, everyone.  A short while ago, the NATO foreign ministers finished our final session.  And I want to start by thanking our Latvian hosts for doing a wonderful job in bringing us all together, in hosting the alliance for two very productive days.

This meeting came at a critical time.  In recent weeks, Russia has stepped up planning for potential military action in Ukraine, including positioning tens of thousands of additional combat forces near the Ukrainian border.  The Lukashenka regime in Belarus has callously exploited the desperation of thousands of migrants to provoke a crisis along Belarus’s borders with Latvia, Poland, and Lithuania.  Three months after Operation Resolute Support in Afghanistan ended, the alliance remains focused on the fight against terrorism, including ISIS-K.  And we’re pressing ahead in writing a new Strategic Concept for NATO to make sure the alliance is prepared for emerging threats in a changing world.

So here in Riga we discussed these topics and more.  Secretary General Stoltenberg did a remarkable job leading our discussions, as he has done leading the alliance these past years.  And he just covered a lot of ground in his own press conference, so let me just speak briefly to four key issues before taking questions.

First, on Russia and Ukraine.  We’re deeply concerned by evidence that Russia has made plans for significant aggressive moves against Ukraine.  The plans include efforts to destabilize Ukraine from within, as well as large scale military operations.

Now, we’ve seen this playbook before, in 2014 when Russia last invaded Ukraine.  Then, as now, they significantly increased combat forces near the border.  Then, as now, they intensified disinformation to paint Ukraine as the aggressor to justify pre-planned military action.  We’ve seen that tactic again in just the past 24 hours.

And in recent weeks, we’ve also observed a massive spike – more than tenfold – in social media activity pushing anti-Ukrainian propaganda, approaching levels last seen in the leadup to Russia’s invasion of Ukraine in 2014.

Now, we don’t know whether President Putin has made the decision to invade.  We do know that he is putting in place the capacity to do so on short order should he so decide.  So despite uncertainty about intentions and timing, we must prepare for all contingencies while working to see to it that Russia reverses course.

The United States has been engaging intensively with allies and partners on this issue, and directly with President Putin.  President Biden convened the leaders of the United Kingdom, France, and Germany on the situation in Ukraine at the G20 meeting in Rome a few weeks ago.  Then, at the President’s direction, CIA Director Burns traveled to Moscow to convey our concerns, our commitment to a diplomatic process, and the severe consequences should Russia follow the path of confrontation and military action.  We’ve made it clear to the Kremlin that we will respond resolutely, including with a range of high-impact economic measures that we’ve refrained from using in the past.

Following my own meetings with President Zelenskyy and Foreign Minister Kuleba last month, other senior State Department officials have been enegaging with Ukrainian partners, with NATO Allies, and with the Russians.  And I came here to Riga to consult and coordinate with our Allies, and it is evident they are as resolute as we are.  I heard that loud and clear in our discussions yesterday and today from virtually all NATO members, and in direct consultations with France, Germany, and the United Kingdom.

We are prepared to impose severe costs for further Russian aggression in Ukraine.  NATO is prepared to reinforce its defenses on the eastern flank.

My consultations will continue tomorrow at the OSCE foreign ministers meeting, where I’ll also meet with Ukrainian Foreign Minister Kuleba and Russian Foreign Minister Lavrov.  The United States remains unwavering in our support for Ukraine’s sovereignty and territorial integrity, and committed to our security partnership with Ukraine.  And just as we’ve been clear with Moscow, we’re also urging Ukraine to continue to exercise restraint.  Because again, the Russian playbook is to claim provocation for something that they were planning to do all along.

Diplomacy is the only responsible way to resolve this potential crisis.  The most promising avenue for diplomacy is for Russia and Ukraine to returnt to dialogue in the context of the Minsk agreements, which aims to end the armed conflict in eastern Ukraine.  President Putin said recently, and I quote, “There is no alternative to the full implementation of the Minsk agreements.”  President Zelenskyy has also reiterated Ukraine’s continued commitment to Minsk.

The United States reaffirms our support for diplomacy and for implementing the Minsk agreements.  We call on all sides to restore the ceasefire to July 2020 levels.  And we urge Russia to de-escalate, to reverse the recent troop buildup, to return forces to normal peace-time positions, to pull back heavy weapons and forces from the line of contact in eastern Ukraine, to refrain from further intimidation and attempts to destabilize Ukraine internally, and to leave plans for further military action behind.

That’s how we can turn back from a crisis that would have far-reaching and long-lasting consequences for our bilateral relations with Moscow, for Russia’s relations with Europe, for international peace and security.

Second, on Belarus.  In light of the destabilizing actions taken by the Lukashenka regime, the North Atlantic Council has suspended cooperation with Belarus.  The United States is preparing additional sanctions in close coordination with the European Union and other partners and allies.  We call on the regime to immediately stop using migrants as political weapons.  We will hold the regime accountable for its ongoing disregard for democracy, for human rights, for the rule of law.

Third, on Afghanistan.  Three months after the end of NATO military operations in Afghanistan, our work together continues.  For 20 years, NATO made sure that Afghanistan could not again become a safe haven for terrorists to threaten our countries and our people.  That’s why we went there in the first place.  No attacks on allies or partners originated in Afghanistan during that time, and together we decimated al-Qaida’s capacity to attack any of our countries or people from Afghanistan.  Now, NATO remains fully committed to the fight against terrorism worldwide and will use all our capabilities to aid in that fight.

I also took the opportunity to thank NATO Allies and partners again for all the contributions that they made to the end of Operation Resolute Support and the successful evacuation of more than 120,000 people from Afghanistan.  From providing military bases for transit to setting up temporary housing facilities for Afghan evacuees and their families to stepping forward to welcome those families to new permanent homes, NATO Allies and partners did whatever it took to get the job done.

For our part, the United States has facilitated the departure since September 1st of 470 U.S. citizens, 417 lawful permanent residents, and other Afghans at risk.  Around 83,000 Afghans have arrived in the United States to start new chapters in their lives.  And together, as an alliance, we’re discussing and tackling many of the challenges that remain, from humanitarian concerns to the security situation.

Fourth, the new Strategic Concept for NATO.  The work that we’ll do on that Strategic Concept between now and the summit next year is vitally important for modernizing our alliance, making sure that it’s able to address challenges we’ll face in the future, fostering unity among the Allies as we navigate an increasingly complex and unpredictable security environment.  I think as you know, the current Strategic Concept, the one that we’re operating under now, dates to 2010, when Russia was considered a partner, China was not mentioned, and the alliance did not yet account for new challenges like cyber threats and the climate crisis.

I again want to commend Secretary General Stoltenberg for leading this process so effectively.  We’ll do our part to help produce a Strategic Concept that reflects the world that we live in and the unique strengths that the alliance brings to bear on that world, because the United States is deeply committed to NATO.  It’s critical to our security.  It’s built on shared values.  It’s a powerful force for stability in Europe and North America.  And at a moment when many democracies are facing serious challenges and the international rules-based order is increasingly under threat, NATO must remain strong; it must remain united.  President Biden has made revitalizing America’s alliances, starting with NATO, a number-one priority.  And our commitment to the security of our Allies and to Article 5 – an attack on one is an attack on all – is ironclad.

And with that, I’m happy to take some questions.

MR PRICE:  We have time for three questions.  We’ll start with Humeyra Pamuk of Reuters.

QUESTION:  You’ve just warned Russia of economic consequences, but what exactly are those measures?  Will the U.S., for example, go as far as cutting off Moscow from the global financial system?  And since Russia has already been sanctioned and weathered those sanctions, what makes you think that Putin will be deterred by today’s warning?

And super-quickly, if I may add, Russia said today it was ordering U.S. embassy staff who have been in Moscow for more than three years to leave by end-January.  What is your response?  And isn’t this diplomatic row and already tense relations setting you up for a rather challenging meeting tomorrow with your counterpart, Sergey Lavrov?  Thank you.

SECRETARY BLINKEN:  Thank you.  Well, first, let me say that we’ve already demonstrated in the 10 months or so of this administration that we can and we will respond to harmful Russian actions: SolarWinds, election interference, repression against Mr. Navalny, and others.  Should Russia follow the path of confrontation when it comes to Ukraine, we’ve made clear that we will respond resolutely, including with a range of high-impact economic measures that we have refrained from pursuing in the past.

I’m not going to spell those out to you today, but what I can tell you is this:  We’ve shared our thinking with allies and partners, and I found a tremendous solidarity across the board in a determination and willingness to pursue strong measures if Russia invades Ukraine and commits renewed acts of aggression.  We’ll be working closely with allies and partners in the days and weeks ahead to flesh out the details.  We will be in lockstep with our allies on this.  And again, should Russia reject diplomacy and reinvade Ukraine, we will be prepared to act.