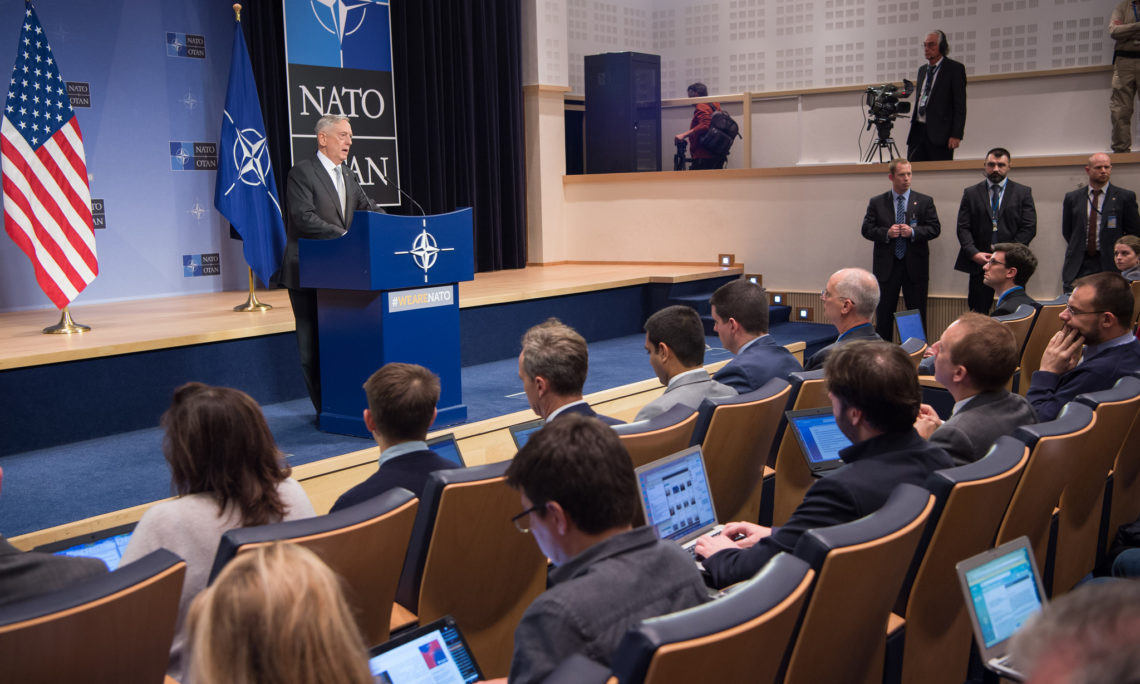 A couple of the subjects we discussed — and I realize you’ve just heard from the secretary general.  But we did talk about the implementation of our strengthened deterrence and defense posture — you know, that’s something that’s been ongoing for some time; I’ll say a few more words about that in a minute — the role of our new NATO cyber operations center and our stance in response to the DPRK’s reckless and destabilizing provocations, recognizing the unity of our individual and collective assessments of the Kim regime’s danger to the world.

We also discussed at length Russia’s now constant efforts to intercede in our nations’ sovereign democratic processes.  We discussed our strategic nuclear issues, in which I received input from our allies to our ongoing posture review in Washington D.C.  NATO is a nuclear-armed alliance, and it is natural and necessary for us to have such discussions among trusted allies.

The discussion included a consideration of the Russian Federation’s violations of the Intermediate Nuclear Forces Treaty and our collective efforts to bring Russia back into a — compliance with the INF. This is absolutely necessary to sustain confidence in arms control agreements.  And we’re doing so in a substantial, transparent and verifiable fashion.

During our meetings, NATO defense ministers collectively stressed the importance of a NATO alliance fit for its current purpose, an alliance where political and military decision-making and military mobility across borders move at the speed of relevance.

We appreciate and support the Netherlands’s leadership on the mobility issue and the European Union’s embrace of the suggested approach to solve this problem.  And they will be meeting on it next week.

2014, as you all know, was a watershed year in Europe and around the world, confirming a Russia that was choosing to be a strategic competitor to NATO and the violent rise of terrorism in the form of ISIS.  From increased defense budgets to refined decision processes and our changed military organizational initiatives, NATO’s defense stance is keeping pace with our new challenges from the east and from the south.

Defense ministers also discussed NATO-led Resolute Support mission in Afghanistan alongside our coalition partners, non-NATO nations which gathered with us.  We discussed orchestrating our fight against terror and the next steps from Afghanistan, actually, to the Middle East, over the two days, and I shared President Trump’s South Asia strategy, which was very well received and firmly supported.

Specifically to Afghanistan, reconciliation remains the political goal of NATO’s military campaign and our comprehensive approach.  Reconciliation must be Afghan-led, with an open door to the Taliban if they choose to stop killing and live by the Afghan constitution.  This strategy, carried out by, with and through our Afghan partners and within the coalition framework, ensures this regional campaign is politically, fiscally and militarily sustainable.

NATO nations and coalition partners are in the process of finalizing troop increases and additional support efforts.  Over two dozen nations have stated that they intend to raise the troop numbers that they have on the ground there now, including some very small nations, for whom this is the largest overseas deployment they have been engaged in.  We appreciate their commitment to stabilizing the South Asia region.

This week’s discussions also afforded the opportunity to further align the alliance posture, ensuring we fully implement the Wales and Warsaw decisions, and in emphasizing our shared values regarding the rule of law, territorial integrity and transatlantic security, to include attention to the sea lanes of communication between North America and Europe.

All in all, ladies and gentlemen, I’ve been engaged in these ministerials since 2007, both in uniform and as secretary of defense.  I’ve never been more impressed by the collective, shared appreciation of our challenges, or by this body’s necessary decision-making to protect our populations and our democracies’ freedoms.

So thank you.  I can take a few questions here.

Q:  Mr. Secretary, you mentioned North Korea.  The Navy today confirmed that three aircraft carriers are going to be carrying out a joint exercise in the western Pacific for the first time in a decade.

What exactly is the message to North Korea, with that specific exercise?  And do you think there is a chance of miscalculation, where it could be misread by the North Koreans and could exacerbate an already pretty tense situation in the region?

SEC. MATTIS:  Well, you’ll have to ask the second question of North Korea.  I don’t — I don’t suppose to read the dictator’s mind.  However, the message to Korea has been consistently — to DPRK, to North Korea — has been consistently sent by the international community, by the United Nations Security Council in unanimous Security Council resolutions, sanctioning their activity.

It — their activity had been condemned by NATO, by European Union.  I can go on.  This is a diplomatically led and, certainly, economically — economic sanctions-reinforced effort to either isolate them and reduce their economic situation, or they can come to the negotiating table.  And everything we do is inside that diplomatic framework.

Sir, I’m interested in why you decided now to raise the issue of what the U.S. views as the Russian violations of the INF Treaty.  Did you share evidence with allies?  And when you say you’re discussing those responses, where is the U.S. now on possible responses?

Are you worried that, if there’s no administration response, it will simply embolden the Russians to violate other treaties, to push the edges on these things?  And how does this fit in with your overall Russia strategy?

The bottom line is you have to have respect for other nations’ sovereignty.  When you make agreements, when you sign treaties, you have to live up to those treaties.

And we have a firm belief, now, over several years, that the Russians have violated the INF.  And our effort is to bring Russia back into compliance.  It is not to walk away from the treaty.  But, just like with the Vienna agreement, the Minsk accord, the Helsinki accord, we now have an increasing concern about Russia’s willingness to live up to the accords that it’s signed, the treaties it’s signed.

So we will — many of the nations already have their own evidence of what Russia’s been up to, and we’ve been in active discussions amongst ourselves on the issue.  It will be going forward, and we will be engaging with Russia as we try to come to a resolution of this.

Q:  Mr. Secretary, thank you for your time.

You briefed the South Asia Policy here today.  We’ve had some details about that.  But one mystery, I think, for a lot of us, in there so far is what exactly is changing with Pakistan.  In light of the additional requests for troops, here and at home, in the United States, what is changing?  Can you provide any specifics?  And is that going to be sufficient to not undermine U.S. and coalition operations in Afghanistan?

In this case, it starts with regionalization, directly pointed at the point that you made about the problem that we’ve incurred with organizations — no matter how badly they get beat up, they retreat across the border and then they come back again.

So, what we want to do is start with — from India to — across the region is make certain that everyone’s working off the same sheet of music.  We want to make certain that no terrorist organization can find a haven anywhere, and, with a border adjoining Afghanistan, that makes Pakistan a priority.

So we’re engaging with the Pakistanis.  We’re engaging a whole-of-government effort.  We’ve got international efforts going on.  And one of the reasons we brought it up here was to make certain we were all aligned about where we stood on this.  And it was remarkable alignment about us all working together to get Pakistan to do everything it can to cut the insurgents off, the terrorists off.

I — as far as what’s different about this, obviously, there are ways that we can reward Pakistan and there’s ways that we can ensure they’re held to account.  But our principle, going into this, is that we are going to work with Pakistan and make this work, so that there’s no longer a threat coming across the border there.

And this is an international effort.  This isn’t an American-alone effort.  So that in itself, that we’re aligned internationally, now, with what we’re doing, is probably the biggest change.

Q:  Hello, thank you.  Ana Pisonero from the Spanish news agency Europa Press.  How many effectors — how many troops are we short, still, for Afghanistan?

And the second quick question, if I may, concerning the military movement:  Are you worried that we can’t get the — a sufficient number of troops and equipment, like tanks and other heavy equipment, in time, anywhere in the eastern flank, to meet a potential threat, whether it’s from Russia, mainly, or any of the other one ?

SEC. MATTIS:  Yeah.  Okay.  I don’t want to talk specific numbers.  Some of the American press have heard me preaching so much on this, they could probably give my reasons without me even speaking for — up for myself.  Basically, I don’t give the enemy information they could use to their advantage.  And I’m told by some, “Well, people used to do that.”  That’s not me.

On the mobility issue, you bring up a very good point.  You know, if you want to have a NATO that is truly capable of protecting the democracies here, you’ve got to be able to work together.  And one of the most fundamental points of that is at the point of borders, where you speed troops across if they’re needed somewhere else in the alliance.

And I would just tell you that the issue has been exposed during exercises.  It has been solved imperfectly in the local area at that moment.  But, as a result of defining the problem so well — and I salute what the Netherlands did.

So no, I’m not worried in the sense that we’ve worked it out on exercise, and they had local solutions.  But we should get a standardization effort, so we’re not having to work it out locally each time.  But the short answer is no, I’m not worried.

SEC. MATTIS:  Well, thank you very much.  I’ve got to go to another meeting now.  Thank you.