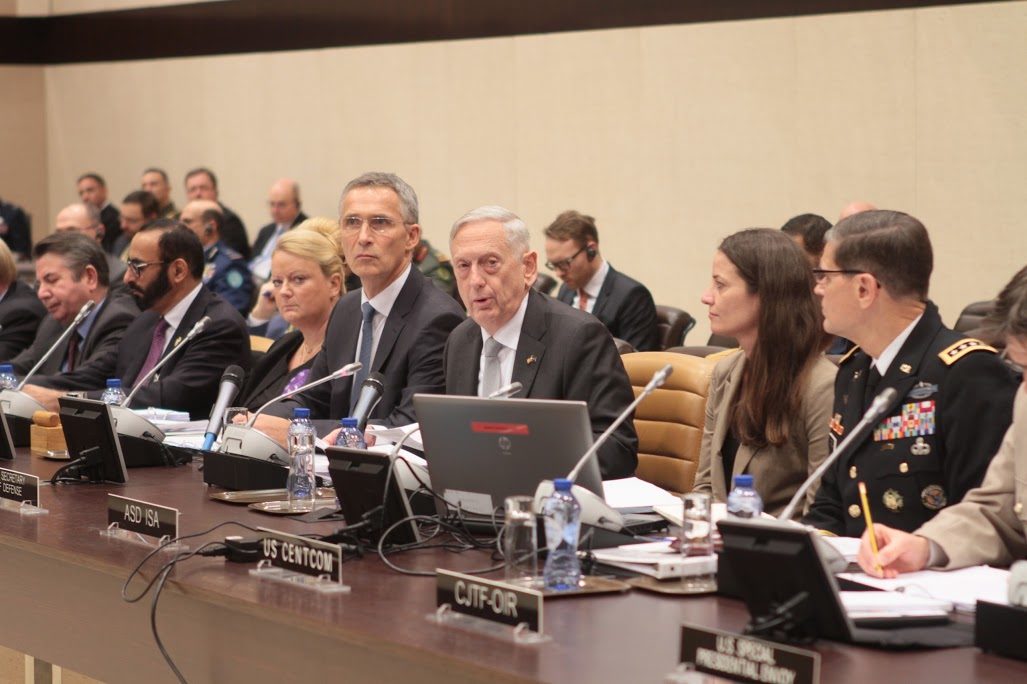 at the NATO Headquarters

SECRETARY GENERAL JENS STOLTENBERG:  Welcome.  I think we are ready to start.  Welcome to this meeting of the Global Coalition to Defeat ISIS.  I’m pleased to see you all here at the NATO Headquarters.

It is a decisive time for the Global Coalition, as the military campaign nears its conclusion.  Raqqa and Mosul have fallen, 95 percent of Iraqi territory once held by ISIS has been retaken and stabilization is spreading:  More than 2 million people in Iraq can now return to their homes.

That success is due to the nations gathered in this room — most importantly, to Iraq, whose forces have shown great courage and resilience, and also to the many other nations around this table, nearly all of whom are NATO allies or NATO partners.

But our work is not done.  As ISIS loses territory, they may seek to prove their relevance by stepping up terrorist attacks in the region and beyond, including here in Europe.  So we must stay vigilant.  We must stay engaged and we must work together to counter new challenges.  That is exactly why we are gathered here today.

So. once again, welcome to NATO Headquarters to all of you, and then I hand over the floor to Secretary Mattis.  Please.

Your excellencies, fellow ministers, generals, our nation’s dedication to defeating the terrorist enemy is evident in the progress we have made since our last gathering here.  As Secretary General just pointed out, 95 percent of the territory once held by ISIS is now liberated, and our partners continue to secure more each day.

Mosul, Tal Afar and Hawija have been liberated.  Efforts to liberate the final pockets of ISIS-held territory in Anbar province are progressing rapidly.  Arab and Kurdish, Sunni and Shia forces under Prime Minister Abadi’s leadership have worked together with unprecedented levels of cooperation.

The ill-advised Kurdish referendum has created tension, but we appear to be on track to resolve this constitutionally, thanks largely to Prime Minister Abadi’s patience.

Two weeks ago, our local partners liberated Raqqa in Syria.  ISIS leadership crumbled and many fighters surrendered.  Despite these successes, our fight is not over.  Even without a physical caliphate, ISIS remains a threat to stability in the recently liberated areas, as well as in our homelands.

This will be a long-term fight requiring all elements of our collective national powers — military, economic, diplomatic, intelligence, as well as law enforcement, counterfinance and countermessaging.

We are stabilizing the territory liberated from ISIS through continued engagement with our Iraqi partners.  Every battlefield is also a humanitarian field, even after the fighting stops, something we must hold actively in our operations as a situation that cannot be overlooked.

Our greatest weapon against this enemy, our greatest strength, is our unity.  ISIS is opposed to all nations’ civilized values, and we must remain focused on the common threat, denying them their sick and twisted objectives.  Groups like ISIS, groups that would seek to sow murder and mayhem, cannot be allowed to succeed.

I will now transition to my closed remarks.  Thank you, press, for being here.