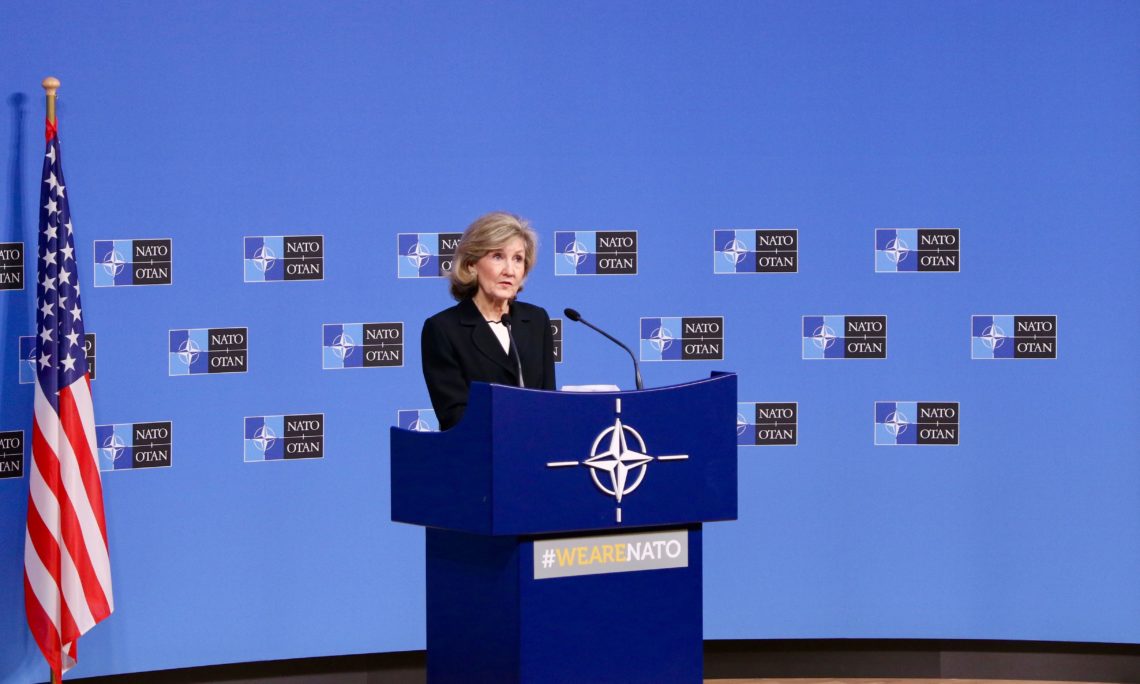 Ambassador Hutchison:  Thank you very much.  We are all looking forward to welcoming Secretary Esper here tomorrow and I think we’re going to have a good discussion at the Ministerial.

There’s a lot going on in the world as we all know, and I think I’ll just say right up front that Secretary Esper is looking forward to talking to the other Ministers and we know that there are many issues on the table that we are going to discuss, and I think it’s going to be a strong time for the Ministers of Defense to work together, knowing that there are some disagreements in the alliance right now, but that’s why as the Secretary General says, we have the ability to talk and have the forum.

The deliverables that we are going to work on at the Ministerial are certainly defense investment, burden sharing where I think we are going to have a good news story as we go up toward the Leaders Meeting, and I think we are going to be able to show a significant increase in the non-U.S. allies’ defense spending and the reports that are coming in right now for the next few years to try to meet the Wales pledge. I think that there will be over $100 billion that will be shown that is being spent now and will continue to go into the future.

You know, we have to all remember that defense spending had gone down before Crimea and before Russia was doing so much malign influence, but every single ally is now increasing defense spending and that is strengthening the alliance for the threats that we face together.

The Readiness Initiative, the four 30s that I know all of you are aware of, is also going to be a NATO Leaders Meeting deliverable.  We think by the end of the year that we will have the four 30s ready to go.  We’re about three-quarters of the way there now in the four air squadrons; the four ships; the four battalions in 30 days.  I meant 30.  The 30 battalions, The 30 air squadrons, 30 ships in 30 days is the four 30s.  We’re three-fourths of the way there and we’re very pleased with that because that is our readiness initiative.

We will certainly talk about Turkey, Syria, the whole Syrian situation.  And I think a lot is happening right now, so I’m not totally clear on all of the aspects of it, but certainly that will be a major area of interest for all of our allies.  There will be a lot of talking and a lot of listening on that front.

Afghanistan, we will have an RSM meeting, but we will also talk at 29 about our efforts in Afghanistan.  Let me say that we are fully funded and fully committed to Afghanistan in the next year, certainly for troops.  And up through 2024 we have the funding for the Afghan troops.  And we can’t say enough about how great the Afghan Army is functioning in Afghanistan. I think when we saw the elections just recently that it was the Afghan forces that were there making sure that to the greatest extent possible that they were protecting the people who were coming out to vote.

We know that the Taliban had threatened people with disruption and that certainly had an impact, but the Afghan forces also were there and I think performed very well to provide that environment so that people could have, and in the neighborhood of two million did vote and we are looking forward to those results very soon.

And the last point I will just make, I know the SecGen stole my thunder, but we’re very pleased about North Macedonia passing the United States Senate ratification yesterday, and I think that is a signal that our door is open.  And the importance of that is that we set the parameters for a country that is in accession for the reforms and the standards, the NATO standards that we asked them to meet.

Macedonia has done a terrific job.  They worked very hard with our ally Greece to the name, to address the name issue.  That was hard-fought in both Greece and North Macedonia.  But these leaders came together and solved that issue and now Macedonia’s on the way and we know they will be a full-fledged ally very shortly when the other countries are able in their parliaments to ratify that treaty.  So we’re very much looking forward to that.

So with that, I will stop and be happy to take a few questions.

I have a question about north Syria.  Secretary Esper said some days ago that he would be looking to press allies to take action on Turkey.  Can you give us a sense of what he’s going to come here and say?  Either in the multilateral/bilateral formats?

Also, do you think it’s time for European countries to take more responsibility for their foreign fighters, given how urgent the situation has become with reports of fighters escaping from detention in North Syria?

Ambassador Hutchison:  Most certainly a lot has happened in Northern Syria just in the last few days.  So I think we are all catching up.

I do think it is important that every country take the responsibility for their foreign fighters that have been caught.  That needs to happen because it’s not a healthy situation for those foreign fighters to remain in Syria.  It’s not stable, so we have been calling on our allies to take back the citizens of their countries for several years actually.  So I hope yes, that they will.

And secondly, we do believe that the effort that was put forward day before yesterday I think, by the German Defense Minister who will be here tomorrow as well, to put together a European group that would be part of an international peacekeeping force is certainly a positive.

I don’t know what the status of that is after the agreement yesterday with Russia and Turkey, but I think there’s a lot to be done in that strip.  Part of it will be Turkish only, if the Turks would ask for more help from the international community  I think the Europeans could step forward, and I think the German Minister along with France and UK could answer that call and it would be a positive thing.

And then in the other areas of that safe zone or the zone in between the Turkish border and the rest of Syria, I think that is a little more complicated because you have the Syrian forces, the Russian forces, and then of course the Kurdish people who are leaving.

So I don’t know how that will come out but Europeans coming in to take a role in an international operation I think can certainly be looked at in a positive way.

Question:  Following up on that.  Thank you, Ambassador.

Would the U.S. be willing to join a potential German force?  Or would you see this very much as a European led and European managed initiative?

Also Secretary Esper said as recently as last night that he believes that Turkey is responsible for war crimes in Northern Syria with what happened with the Kurds.  Is that the U.S. position?  And would you expect him to come in and ask other allies to support the results of the U.S. investigation on this?

Ambassador Hutchison:  I think certainly it would be a to be determined issue if the U.S. were going to be part of another operation.  I don’t think that is in the works right now at all.  I think the Europeans have stepped forward and I don’t see the U.S. playing a role there.

However, the U.S. will have a role in the Defeat ISIS Coalition.  It will continue.  That is the reason that we went into Syria.  We will be continuing to assure in the best way that we can that Defeat ISIS is not lost.  We need to continue the fight to assure that ISIS does not rise again, that it does not go back into Iraq or into Afghanistan or into any of our countries.  So de-ISIS is still very much an American-led effort which will continue.

On the — you asked another question.

Question:  Turkey may be responsible for war crimes.

Question:  I was curious to get your thoughts on how you see Turkey’s relationship with Russia, given that it is now deepening with last night’s agreement.

I mean is it an issue for you that Turkey, a NATO ally, is engaging so deeply with Russia or Syria on the S-400 issue.  But this is a deepening relationship.  How much a problem, if any, is this?

Ambassador Hutchison:  I think we have to be very watchful of the increased footprint that Russia certainly is taking in Syria.

We are very clear and on the record regarding the S-400.  We think that was a mistake on Turkey’s part to put an S-400 in a NATO country.  And it is something that we still hope will not be deployed.

So having said that, I just think we need to watch very carefully if Russia is turning a corner to begin to try to be a force that is a stabilizing force, as opposed to what has happened in the past few years in which Russia’s support of Syria, when Assad was murdering his own people.  We didn’t see Russia stepping in to tell Assad that his support, his Russia support would cease if Assad committed those kinds of crimes.

So, I think we would be hopeful and watchful about now this new role that Russia seems to be trying to play and hope for the best but prepare in case that doesn’t come into play.

Moderator:  I’m afraid we’re out of time.  Thank you.