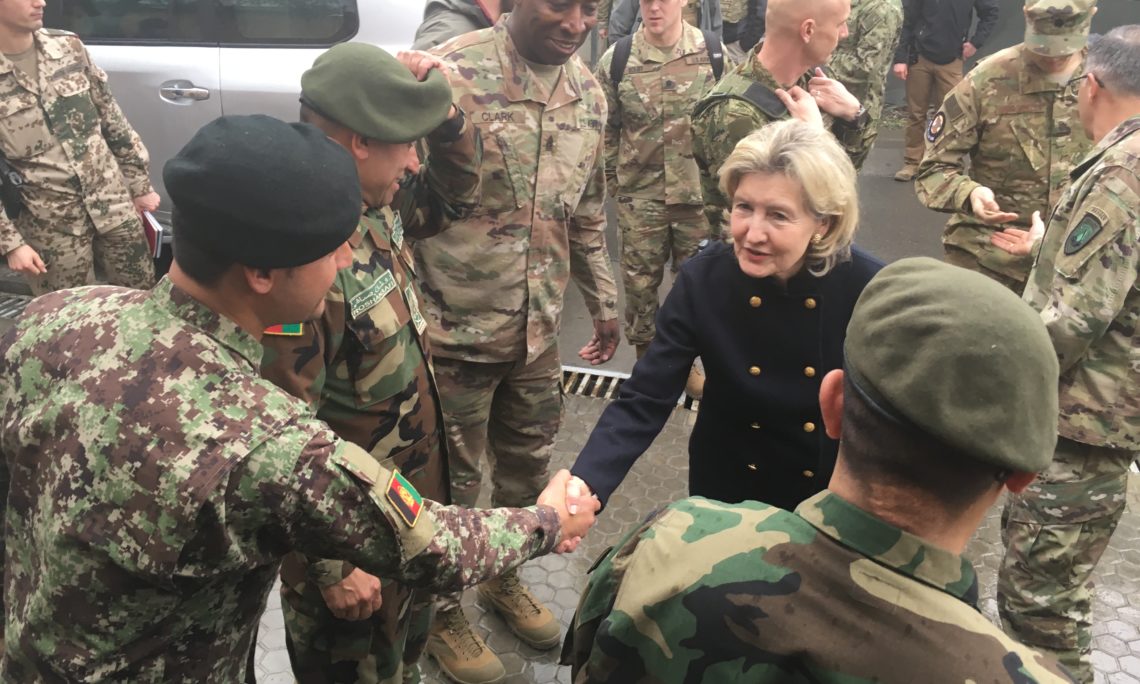 Afghans are demanding peace, and NATO must help

“We want peace, not revenge.”

This was the clear message of a petition from 1 million Afghan citizens to their government. It was the same message that we, the NATO Ambassadors of four nations, Germany, Italy, Turkey and the United States, heard when we visited our military commanders in Afghanistan last month.

We also held meetings with President Ashraf Ghani and other leaders of the National Unity Government ahead of a crucial year with parliamentary elections in Afghanistan and the North Atlantic Treaty Organization Summit in Brussels. President Ghani and Chief Executive Abdullah Abdullah are working together to advance reforms and address corruption. They are also working jointly to communicate the need for an Afghan-owned and Afghan-led reconciliation with the Taliban and other disruptive forces, if they will join a unified effort for the good of their country.

We came away from these meetings and briefings by military leaders in Kabul, Herat and Mazar-i-Sharif with renewed commitment to peace and reconciliation in Afghanistan.

You may ask, why does it matter for us in Europe and North America? And why do we think we can make a difference in Afghanistan after all of these years?

First, why does it matter?

Transnational terrorist organizations operating in Afghanistan could export their violence to Europe. Osama bin Laden operated from there when planning his 9/11 plot against America. We must avoid a destabilized country that provides safe haven to terrorists determined to spread their horror. We are working with the Afghan government to stop terrorism and to protect NATO allies and partners from this threat, but this is also of crucial humanitarian importance for the people who live in Afghanistan. In addition, instability is one of the main reasons for migration. Today, the second largest refugee population in Europe is from Afghanistan.

During our meetings, officials consistently told us that regional actors are jeopardizing the prospects for peace. All involved actors — including Pakistan, Iran, and Russia — should constructively engage in an Afghan-owned, Afghan-led peace process.

Secondly, why do we remain hopeful for a successful outcome after 16 years?

Our goal is to ensure terrorist groups are unable to use Afghan territory to direct or support terrorist attacks against the Afghan people and our homelands. To achieve this goal, it’s important to cut off terrorists from external support, increase control of the Afghan government, and see economic and political progress, especially toward peace and reconciliation.

We have reinforced our strategy in two ways:

1. NATO, together with its partner nations, is training, advising, and assisting the Afghan National Defense and Security Forces in their fight to make sure that Afghanistan never again becomes a safe haven for terrorists.

2. The Afghan government is beginning to advance a political process toward peace and reconciliation so that one day Afghanistan will be stable and free from violence.

The first steps taken at the Kabul process meeting at the end of February are encouraging. President Ghani actively reached out; and the Taliban should accept this offer and engage in peace talks. We support the call for peace talks without preconditions, and we will respect any negotiated settlement that includes the Taliban rejecting violence, cutting ties to al-Qaeda and other international terrorists, and accepting the Afghan Constitution, including the rights of women and minorities.

We saw a resolve in the Afghan leaders, the military, and the people.

NATO advisors praised the commitment and courage of the Afghan security forces. They have been trained by 39 NATO allies and partners who contribute expertise in critical areas. Afghan ground troops know the local terrain and they are willing to take risks to defend the Afghan people. And renewed air surveillance is helping these brave Afghans better locate and confront terrorists.

The Afghan government’s leaders acknowledge that reforms are essential not only to advance their country and to lay the ground for a better future, but also to honor the sacrifices of NATO allies and partners, the Afghan military, and civilians.

NATO’s commitment has helped the Afghans achieve much progress. In 2001, girls could not go to school, women could not work, and there were 496 health care facilities in the whole country. By 2017, 48 percent of girls attended primary school, women attended universities and served more openly in the military and police forces. There are 2,400 health care facilities and the life expectancy has increased by 15 years.

One of the messages from government officials is: We’re not fighting for fighting, we’re fighting for peace. NATO’s two-pronged strategy, security and reconciliation, provides the framework to help the Afghan people achieve peace. NATO’s commitment is to stay the course to enable Afghans to become contributors to the region and to prohibit terrorists a safe haven that they can use to threaten the people of our own countries.

Kay Bailey Hutchison is the U.S. ambassador to NATO and a former U.S. senator from Texas.

Hans-Dieter Lucas is the German ambassador to NATO.

Claudio Bisogniero is the Italian ambassador to NATO.

Mehmet Fatih Ceylan is the Turkish ambassador to NATO.