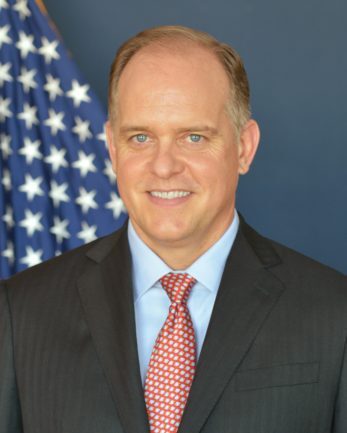 Douglas Jones took up his assignment as the Deputy Permanent Representative and Deputy Chief of Mission of the U.S. Mission to NATO in August 2018 and became Chargé d’Affaires a.i. in January 2021.  Mr. Jones was previously posted to the U.S. Mission to NATO as Deputy Political Counselor and served as acting head of the Political Section from 2008-2009. He also served in Washington DC as Director for NATO and Western Europe at the National Security Council from 2010 to 2011.

Before arriving in Brussels, Mr. Jones was the Deputy Chief of Mission in Zagreb, Croatia from 2016 to 2018.  Prior to that, he served in Washington, DC as the Director of the Office of Peacekeeping, Sanctions and Counterterrorism in the Bureau of International Organization Affairs at the Department of State.  Earlier assignments include Deputy Chief of Mission in Podgorica, Montenegro, and Senior Civilian Representative at the Provincial Reconstruction Team in Jalalabad, Afghanistan.

He has also served on the U.S. delegation to the United Nations in New York and in the Office of Israel and Palestinian Affairs in the Department of State.  Other overseas assignments include Sarajevo, Dublin, and Tel Aviv.

Mr. Jones holds a Bachelor’s Degree from Bowdoin College and a Master’s Degree in International Relations from Princeton University.