President Biden at a Press Conference at the NATO Summit Brussels, Belgium
By U.S. Mission to NATO
12 MINUTE READ 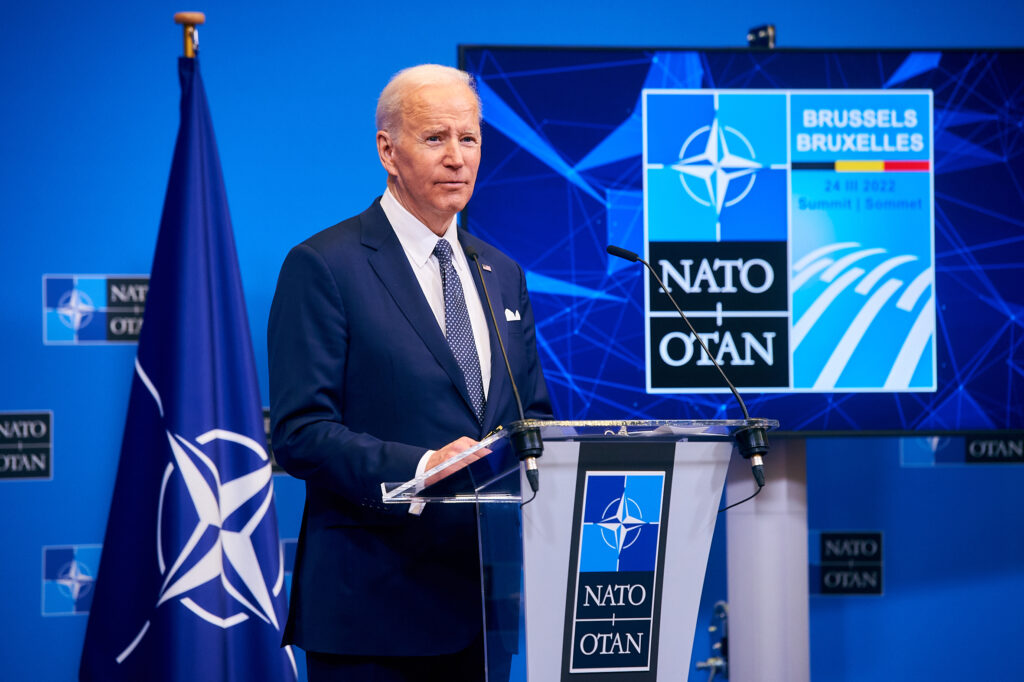 THE PRESIDENT:  Good evening, everyone.  With all the press that’s here, you must be getting very tired.  Am I the 16th or 17th?  At any rate, all kidding aside, thank you for taking the time.

I — today marks one month since Russia began its carnage in Ukraine, the brutal invasion of Ukraine.  And we held a NATO summit the very next day.  At that time, my overwhelming objective, wanting that summit, was to have absolute unity on three key important issues among our NATO and European allies.

First was to support Ukraine with military and humanitarian assistance.

Third was to fortify the eastern flank of our NATO Allies, who were obviously very, very concerned and somewhat at — worried what would happen.

We accomplished all three of these.  And today, we’re determined to sustain those efforts and to build on them.
The United States has committed to provide over $2 billion in military equipment to Ukraine since I became President — anti-air systems, anti-armor systems, ammunition.  And our weapons are flowing into Ukraine as I speak.

And today, I’m announcing the United States have prepared to commit more than $1 billion in humanitarian assistance to help get relief to millions of Ukrainians affected by the war in Ukraine.

Many Ukrainian refugees will wish to stay in Europe, closer to their homes.  But we’ve also — will welcome 100,000 Ukrainians to the United States with a focus on reuniting families.

And we will invest $320 million to bolster democratic resilience and defend human rights in Ukraine and neighboring countries.

We’re also coordinating with the G7 and the European Union on food security, as well as energy security, and I’ll have more to say about that tomorrow.

We’re also announcing new sanctions of more than 400 individuals and entities aligned with — in alignment with the European Union: more than 300 members of the Duma, oligarchs, and Russian defense companies that fuel the Russian war machine.

In addition to the 100,000 U.S. forces now stationed in Europe to defend NATO territory, NATO established, as you already know, four new battle groups in Romania, Hungary, Bulgaria, and Slovakia to reinforce the eastern front.

Putin was banking on NATO being split.  In my early conversation with him in December and early January, it was clear to me he didn’t think we could sustain this cohesion.

NATO has never, never been more united than it is today.  Putin is getting exactly the opposite of what he intended to have as a consequence of going into Ukraine.

We built that same unity with our European — the European Union and with the leading democracies of the G7 — in the G7.

So I want to thank you, and I’ll be now happy to take your questions.  Since there’s so many people out there, I’m going to — I’ve been given a list.

Now, how about Chris with the Associated Press?  First question.

Q    Hi.  Thank you, Mr. President.  So you’ve warned about the real threat of chemical weapons being used.  Have you gathered specific intelligence that suggests that President Putin is deploying these weapons, moving them to position, or considering their use?

And would the U.S. or NATO respond with military action if he did use chemical weapons?

THE PRESIDENT:  You know, on the first question, I can’t answer that.  I’m not going to give you intelligence data, number one.

THE PRESIDENT:  If I had your voice, I’d had been elected a lot earlier.  (Laughter.)

Can you talk to us about two things, sir: One, since your conversation with President Xi of China, have you seen any indications of action or lack of action from China that has led you to believe whether they will intervene and help Russia either with the sale of arms or the provision of supplies to support this war in Ukraine?
And secondly, can you say whether this — the conversation today turned to the subject of food shortages, and what the U.S. will do to address wheat shortages, in particular, as a result of this war?  Thank you.

THE PRESIDENT:  On the first question relating to President Xi Jinping of China, I had a very straightforward conversation with Xi — now, I guess, it’s six days ago, seven days ago — in that range.

And I made no threats, but I pointed out the number of American and foreign corporations that left Russia as a consequence of their barbaric behavior.  And I indicated that I knew how much he — because we had long discussions in the past about his interest in making sure he has economic relations and economic growth with Europe and the United States — and indicated that he’d be putting himself in significant jeopardy and those — in those aims if, in fact, he were to move forward.

I am not going to comment on any detail about what we know or don’t know as a consequence of that conversation.  But tomorrow is — is it tomorrow or next Monday that Ursula is having that conference with China?

We’ve had discussions — because I think that China understands that its economic future is much more closely tied to the West than it is to Russia.  And so I — I’m hopeful that he — he does not get engaged.
We also did discuss today that there’s a need for us to set up, NATO to set up, and — and the EU — to set up a system whereby we have an organization looking at who has violated any of the sanctions, and where and when and how they violated them.  And that’s something we’re going to put in train.  It’s not done yet.

So, with regard to Xi, I — I have nothing more to report.

With regard to food shortage, yes, we did talk about food shortages.  And — and it’s going to be real.  The price of these sanctions is not just imposed upon Russia, it’s imposed upon an awful lot of countries as well, including European countries and our country as well.  And — because both Russia and Ukraine have been the breadbasket of Europe in terms of wheat, for example — just to give you one example.

But we had a long discussion in the G7 with the — with both the United States, which has a significant — the third-largest producer of wheat in the world — as well as Canada, which is also a major, major producer.  And we both talked about how we could increase and disseminate more rapidly food.  Food shortages.

And in addition to that, we talked about urging all the European countries and everyone else to end trade restrictions on — on sending — limitations on sending food abroad.  And so, we are in the process of working out, with our European friends, what it would be — what it would take to help alleviate the concerns relative to food shortages.

We also talked about a significant, major U.S. investment, among others, in terms of providing for the need for humanitarian assistance, including food, as we move forward.

Tarini, of the Wall Street Journal.  Watch out you don’t get hit in the head there now.  (Laughter.)

Q    Mr. President, in your view, does President Zelenskyy need to cede any Ukrainian territory in order to gain a ceasefire with Russia?  Or is that completely off the table?

And then also, do you think that Russia needs to be removed from the G20?

THE PRESIDENT:  On the latter point, my answer is yes.  That depends on the G20.  I — that was raised today.  And I raised the possibility, if that can’t be done — if Indonesia and others do not agree, then we should, in my view, ask to have both Ukraine be able to attend the meetings, as well as — well, basically Ukraine being able to attend the G20 meetings and observe.

With regard to — what was the first question?

Q    If you think that Ukraine needs to cease — to give up any territory in order to get a ceasefire.

THE PRESIDENT:  That is a total judgment based on Ukraine.  “Nothing about Ukraine without Ukraine.”  I don’t believe that they’re going to have to do that, but that’s a judgment.  There’s negotiations — that are discussions, I should say — that have taken place that I have not been part of, including Ukrainians.  And it’s — it’s their judgment to make.

Cecilia, ABC.  There you are.

Sir, you’ve made it very clear in this conflict that you do not want to see World War Three.  But is it possible that, in expressing that so early, that you were too quick to rule out direct military intervention in this war?  Could Putin have been emboldened, knowing that you were not going to get involved directly in this conflict?

THE PRESIDENT:  No and no.

THE PRESIDENT:  It would re- — it would trigger a response in kind, whether or not — you’re asking whether NATO would cross; we’d make that decision at the time.

Q    And my final question: Because you’re heading to Poland tomorrow, do you think that getting a firsthand look at the effects of this war on these millions of Ukrainians who have fled their country could change the way that you might respond?

THE PRESIDENT:  I don’t think so, because I’ve been to many, many warzones.  I’ve been in refugee camps.  I’ve been in warzones for the last 15 years.  And it’s — it’s devastating.  And what — the thing you look at the most is you see these young children, you see children without parents that are in those camps or in — or refugees.  You see women and husbands — men and women who are completely lost and have no — you see the look — that blank look on their face, that absolute feeling of, “My God, where am I?  What’s going to happen to me?”

And so, it — what it will do, it will reinforce my commitment to have the United States make sure we are a major piece of dealing with the relocation of all those folks, as well as humanitarian assistance needed both inside Ukraine and outside Ukraine.

For example, this is not something that Poland or Romania or Germany should carry on their own.  This is an international responsibility.  And the United States, as the leader — one of the leaders in the international community, has an obligation to be engaged — to be engaged and do all we can to ease the suffering and pain