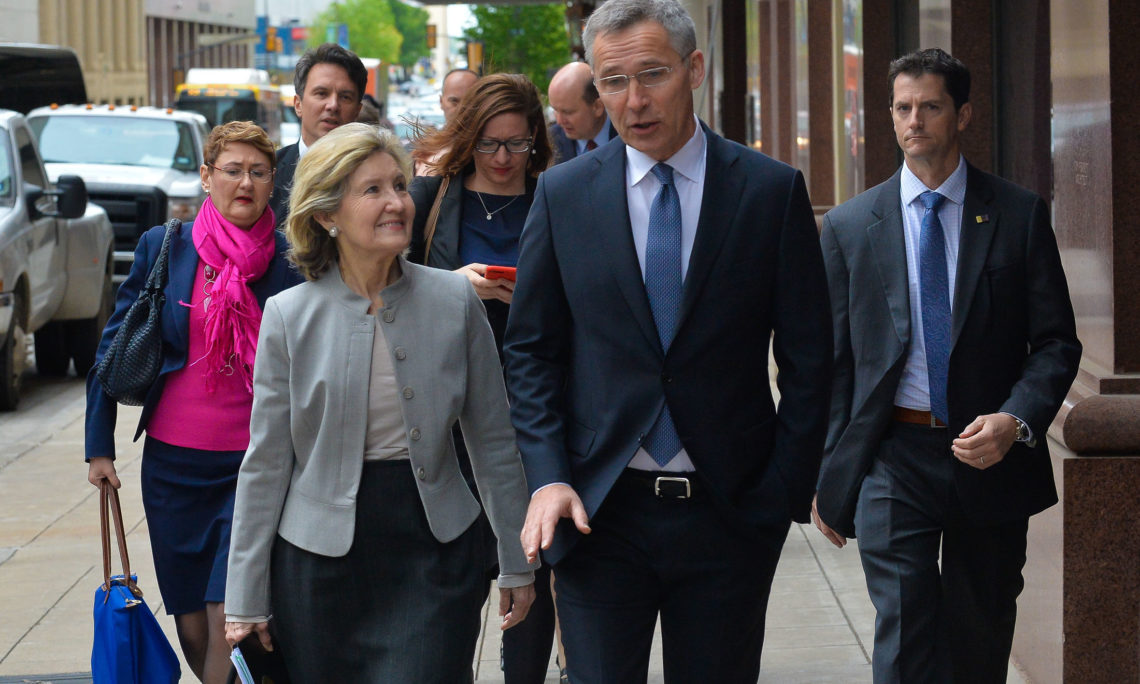 Ambassador Kay Bailey Hutchison Visit to Texas:  NATO is the Cornerstone of U.S. and Transatlantic Security

Ambassador Hutchison accompanied Secretary General Stoltenberg on his visit to Southern Methodist University (SMU) in Dallas and met with former President George W. Bush.  In remarks to SMU students, the Ambassador underscored NATO’s role as the cornerstone of U.S. and transatlantic security over the past 69 years.  She remembered how NATO came to America’s defense following 9/11, invoking Article 5 – the collective defense clause of the Washington Treaty – for the first time in its history.  In facing today’s challenges, she stressed the importance of increased defense spending and investment in modernization and capabilities across the Alliance.  Since 2015, Canada and European Allies have increased spending and investment in defense by $46 billion, which strengthens NATO’s ability to deter or defend against any adversary.

At the Lockheed F-35 Lightning II production plant in Ft. Worth, the Ambassador joined Stoltenberg in a tour of the facility.  “Eight NATO Allies currently participate in the F-35 program.  It represents an important investment in the long-term capabilities of NATO to defend its citizens and face any threat,” said Ambassador Hutchison.  “I am so proud of my fellow Texans here in Ft. Worth in working with partners across the globe to provide state-of-the-art technology in defense of our country and our closest friends and Allies.”

The Ambassador concluded her visit with the Secretary General at Sheppard Air Force Base in Wichita Falls where many NATO Allies participate in the Euro-NATO Joint Jet Pilot Training Program.  Meeting with recent graduates of the program, Ambassador Hutchison stressed, “What NATO is doing now is so important, and America is the leader.  We are gearing up to be able to fight any kind of threat that any of our 29 nations would have.”  She thanked the local community for the support they provide the base and pilots and their families throughout the Alliance.