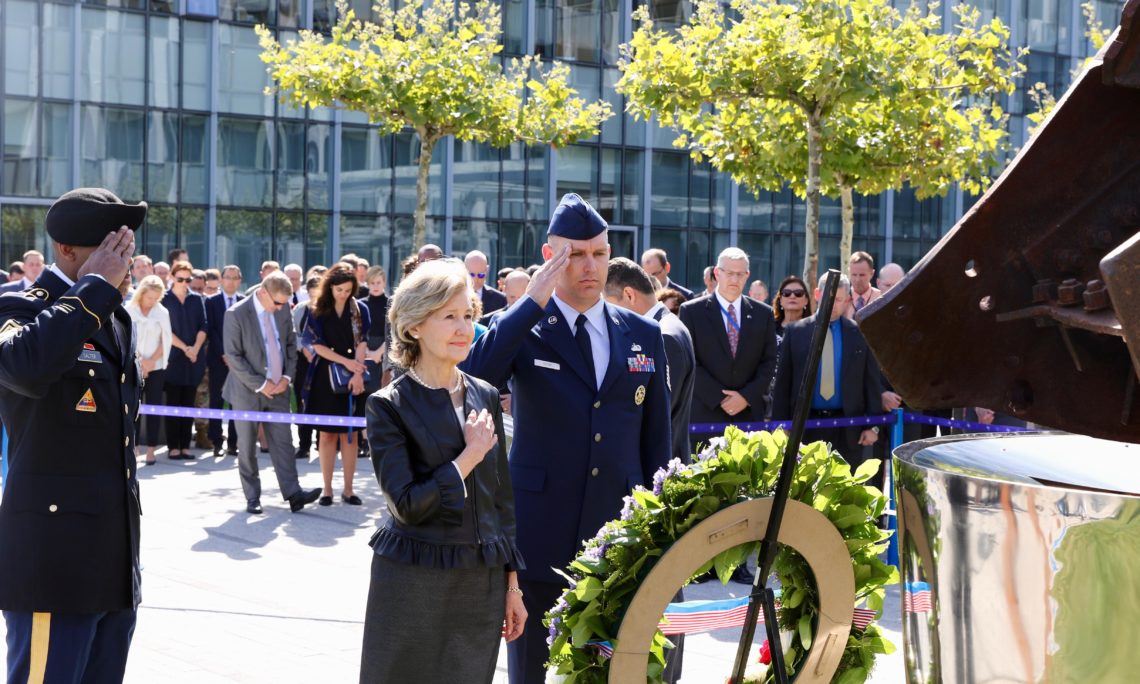 In her remarks, Ambassador Hutchison recognized those lost in the World Trade Center, Pentagon, and United Flight 93 attacks.  “Today is a solemn day here in front of a piece of the Twin Towers.  We think of the memory of the 3,000 people who lost their lives from so many countries. While terrorists tried to show the worst they could do, our people demonstrated the best of humanity.”

The memorial features a segment of the North Tower of the World Trade Center loaned by the National September 11 Memorial & Museum in New York in recognition of the September 12, 2001 invocation of Article 5, NATO’s collective defense clause, in defense of the United States. It was the first and only time NATO and its Allies have invoked Article 5, which resulted in NATO participation in protecting America’s air space following the attacks and the International Security Assistance Force (ISAF) mission in Afghanistan during which over 1,100 service members from NATO Allies and partners paid the ultimate sacrifice.

“History recalls September 11 as a national day of tragedy, but here at NATO, we take stock in what happened in the aftermath of that terrible day seventeen years ago.  That is the other part of this memorial,” Ambassador Hutchison said in recognition of NATO’s quick response in defense of the United States.  “They came to our side and, immediately after 9/11, we took the fight to terrorists directly.  We continue that work today in Afghanistan and Iraq.”

NATO transitioned to its current non-combat train, advise, and assist Resolute Support Mission in support of Afghan security forces in 2014.  Ambassador Hutchison recognized the commitment to peace and personal sacrifice U.S. and NATO Allied service members have made in Afghanistan.

A sacrifice most recently made by U.S. Army Command Sergeant Major Timothy A. Bolyard who was killed on September 3 while deployed to the Resolute Support Mission.  “Sergeant Major Bolyard was no stranger to the risks of that mission.  Six bronze stars were testament to his valor and commitment to protecting us against another 9/11.”  Ambassador Hutchison added, “He is the example that we have enduring today of honor and service and commitment.  That is why our work at NATO with our Allies beside us is so vital for our country.”