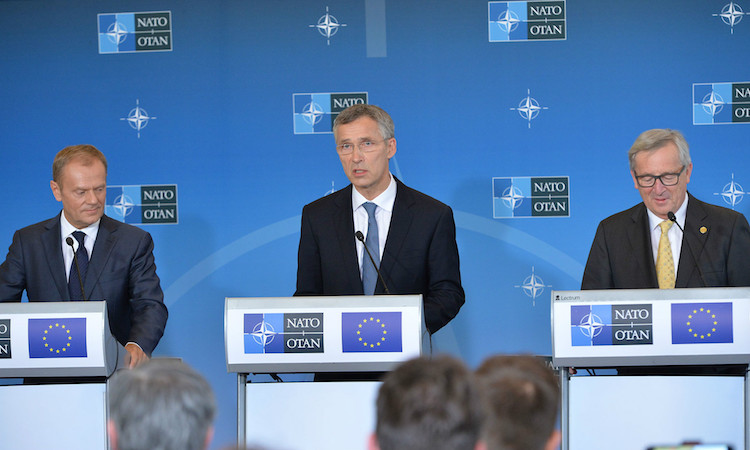 at the Signing Ceremony of the EU-NATO Joint Declaration

Followed by Statements by President Tusk and President Juncker

President Donald Tusk, President Jean-Claude Juncker and I have just signed a declaration to give a new substance and new impetus to the partnership between NATO and the EU. And this historic decision will enable us to work even closer together and closer than ever before.

Our security is interconnected. And we face a range of unprecedented challenges. Separately, neither NATO nor the EU can fully address them. But together, we are a formidable team. With the tools necessary to protect our citizens. And to project stability in our neighborhood. By working together, we make the most efficient use of our resources. Unity and cooperation between NATO and the European Union remains as important as ever.

In these times of uncertainty our partnership is increasingly essential.  We have a united stance on Russia. The EU has delivered sanctions. NATO has delivered the greatest increase in our collective defense since the Cold War.

Together we are also tackling human trafficking in the Aegean. And we have seen results. The number of crossings has decreased from thousands a day to close to zero. From the start of this year NATO and the EU have reached two formal arrangements. On Aegean cooperation and on cyber defenses.

So we have actually concluded more formal arrangements in the past six months than in the previous thirteen years. And that says something about the progress we are making in the cooperation between NATO and the EU.

Now is the time to take our cooperation to a new, even higher level. Today we decided that we will do this based on consultations within each organization with our member states. We will boost our common ability to counter hybrid threats. Including through timely information-sharing. Through cooperation on civil preparedness, cyber defense, and strategic communications.

We have developed Playbooks to address hybrid threats. Identifying who does what if our nations come under hybrid attack.  And today I have shared with the President of the European Commission NATO’s baseline requirements for national resilience.

On issues such as energy security, food and water supplies and continuity of government.

So we can better coordinate.

We will also expand our cooperation in the Mediterranean Sea. Where information sharing and coordination can make us more effective in tackling illegal migration, terrorism and other challenges.

We will work more closely together on cyber security and defence. We will do more to help our partners build up their own defence capabilities. And we will train and practice our cooperation through linked exercises.

NATO and the EU have both made enduring contributions to the peace and stability we have enjoyed in Europe over decades.We are unique and essential partners.

Together we can be more effective in protecting our citizens. And upholding our common values.

So – Donald and Jean-Claude – I am pleased and proud that we are moving forward and closer together and that we are enhancing the cooperation between NATO and the EU.

I look forward to working with Federica on implementing what we have decided.

And I look forward to welcoming all of you at the NATO Summit here in Warsaw later on today.

So once again, thank you both to Donald and to Jean-Claude. Thank you.

Our two organisations are partially overlapping, but different membership, their own rules and procedures. On the other hand, they are complimentary and mutually therefore it makes sense to work more closely together.

We want to be ready to response and coordinate our actions if and when one of our members or institutions come under hybrid threats. We equally want to prevent attacks.  This is why we intend to improve our interactions, to intensify intelligence sharing among our staff and to conduct parallel and coordinated exercises.

At stake is real life. Our current infrastructure could be attacked. Our current banking system could be hacked or our citizens could be exposed to disinformation campaigns via social network. Our own security starts often at the borders of our partners and neighbors. We owe them strengthen capacities to react to various security and defence challenges ever.

To conclude, I would like to say that we are bound by much more than only common threats. The parties of the North Atlantic Treaty declare that they are, and I quote, determine to safeguard the freedom, common heritage and civilization of their people, founded on the principles of democracy, individual liberty and the rule of law.

The founding treaties of the European Union are based on the same principles. Loyalty to these values remain not only a pre-condition for the cohesion of our communities, but in fact, it is the very reason why we are ready to defend one another. Anyone who weakens these values will in effect lead to the weakening of our security sooner or later.

Our cooperation is a strategic priority, our greatest strength is unity of values and purpose.

Excellence of our resources complement each other. But today, we have decided to do more. We must choose all the tools at our disposal. This is an area where the European Union has to be ambitious. Last week, Frederica Mogherini presented the global strategy on security and foreign policies to Heads of State and Government. This is a clear statement of our political ambitions.

The European Union will play his part in full. Over the past 18 months, we have already done a lot. Our work is under way. In April this year, we launched our strategy on hybrid threats. This is the mark of a changing worth. But the military threat is one of many. Our European service is now working closely with NATO to take this forward, especially when it comes to detecting and responding to hybrid threats.

On cyber security, we launched this week a new public-private partnership to strengthen this vital sector. Over the next four years, we aim to mobilize 1.8 billion euros in new investment. A strong European defense requires a stronger European defense industry. This is possible only if member states do cooperate.

Later this year, we will table our defense action plan. It will bring together all the tools that European Union can offer: our policies, programs and founding to support defense cooperation and our defense industry.

Research will play an important role through our programs, financing new researches to technologies that support the defence industry. Action worth 19 million euros is already a guide. At the same time, we are deepening our cooperation with partners in our neighborhood. Today in our modern era, development and security goes hand in hand.

Earlier this week, we decided to amend our instruments for stability and peace. Thanks to our decision, we can now strengthen our partners’ capacities. Between now and 2020, we allocate up to 100 million euros to build security capabilities, including military so that our partners can better prevent and respond to crises.

And finally, our maritime cooperation with NATO has already showed his effectiveness. As part of our response to the refugee crisis, NATO has closely used military Operation Sophia and used border management agency Frontex to conduct intelligence and surveillance in the Aegean Sea.

These are the many areas where the European Union and NATO cooperation is practical. Our work is complementary, but we have every reason to work more closely together.

As we confront instability, this is not a time for introspection or isolation. We must show unity and a new sense of purpose. This is the essence of our declaration today, which was consulted with all member states of both organizations. And together, we are already turning this work into action.