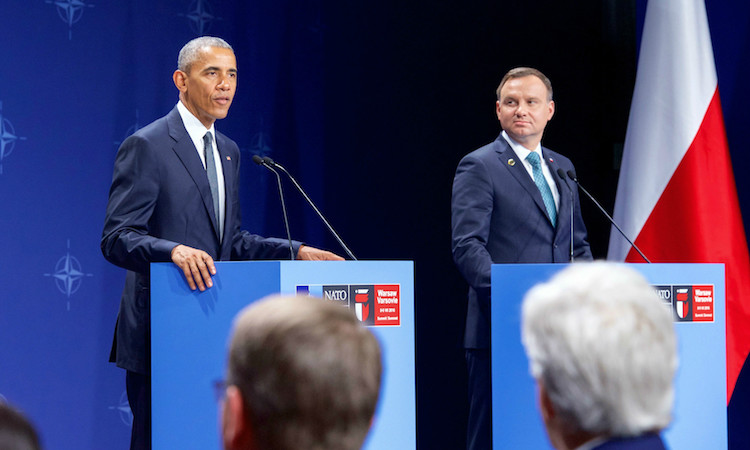 Remarks by President Obama and President Duda After Bilateral Meeting

PRESIDENT DUDA:  (As interpreted.)  Excellency, Mr. President, ladies and gentlemen, thank you very much that in my capacity as President of the Republic of Poland, I can welcome the President of the United States, Mr. Barack Obama, to Warsaw, to NATO Summit.  It is my great pleasure because I hope that this summit will have a historic character and historic dimension.

In both meetings, on the one hand, as regards the demonstration of the unity, coherence and solidarity within the North Atlantic Alliance, among its member states, indivisibility and security within NATO.  Also, the unity as regards territorial security that we are speaking with one voice; that we are together.  But on the other hand, this summit is significant as regards the construction of an ever-most strategic and robust partnership between Poland and the United States.

This partnership is there — this partnership is materializing both in the economic dimension, where cooperation is going smoothly, but recently, it has also materialized as it regards military cooperation.  In other words, joint construction of the security zone.  And for that, we are grateful to Mr. President and the United States.  We are grateful for their friendliness.  We are also grateful for the understanding that security is there where the strongest armed forces in the world are present.  And the strongest armed forces of the world is the armed forces of the United States, as we all know.

And that is why we welcomed American troops to the Anaconda exercise.  We were hugely pleased that they were so numerous.  We are also happy that a heavy brigade of the United States will be operating in the territory of Poland.  We are pleased that the United States is providing such a decisive support to this reinforcement of the military potential of the North Atlantic Alliance.  In our part of Europe, in Central Europe, about which we are saying that it is the Eastern Flank of NATO.  So thank you for all those actions.

We had a very good conversation with Mr. President.  Thank you, Mr. President, for accepting my condolences — because although we are busy, working people, nevertheless the tragic information on what happened in Dallas, of course, has reached Poland as well.  And on to the hands of Mr. President, I expressed my condolences for the American nation.  But first and foremost, I want to express those condolences to the families of the police officers who died on duty.  And these significant — the ethos of duty is very strong in the United States.  It is an element of the great patriotism.  And I had this opportunity to see that myself when I talked to American commanders and to American troops during Anaconda exercise.  So, Mr. President, once again, please accept my words of sympathy and condolences.

Unfortunately, this is what happens in life.  At times, such tragedies happen.

Ladies and gentlemen, myself and Mr. President discussed a wide range of topics.  We touched upon all the important issues.  We discussed Brexit.  I’m happy that Mr. President has got a very clear position — namely that the UK will keep its position within the North Atlantic Alliance, because this is a crucial country and our extremely important partner.  We would like that partner to strengthen their potential.

We also discussed the issue of migration.  I told Mr. President that we are supporting in the spirit of solidarity the actions of the Allied armed forces also in the South by deploying our troops there, a Polish F-16 aircraft and Kościuszko brigade.  We had a very good conversation.  Thank you very much, Mr. President, for that.

There is still a lot of work ahead of us at this summit, today, some hard work.  I believe, as I have already said, that this summit is going to be symbolic in nature.  It is going to further strengthen our strategic partnership.  Polish people like America.  Polish people like Americans.  And we are hugely pleased with your presence here in Warsaw, Mr. President — both today and tomorrow.

PRESIDENT OBAMA:  Dzień dobry.  Thank you, President Duda, for welcoming me today.  This is my third visit to Poland as President.  I’ve got very fond memories of my visit here two years ago when I joined Poles in Castle Square to celebrate a quarter century of Polish freedom.  And it’s wonderful to be back.  As always, I bring greetings and friendship of the American people, especially the many proud Polish Americans, many of whom live in my hometown of Chicago.

We’re here, of course, for the NATO summit, and the fact that it’s being held here in Warsaw is a testament to Polish leadership.  In the United States, we consider Poland one of our most committed and important allies.  Poland is a leader in NATO as one of the nations that pays its full share — 2 percent of GDP — for our collective security.  Poland supports alliance missions, including in Afghanistan, and I thank Poland for its new contributions to the campaign against ISIL — F-16 aircraft and special forces trainers.  And Poland has stepped forward as host of interceptor sites for our defense system against ballistic missiles from countries like Iran and as a linchpin in the defense of NATO’s eastern flank.

Here in Warsaw, I want to once again affirm the enduring commitment of the United States to the security of Poland.  As treaty allies, we have a solemn, binding Article 5 duty to defend each other.  And in this obligation, we will never waver.  These are not just words — they are backed up by deeds.  When I first came here five years ago, I promised to increase our commitment to Poland’s security, and that’s exactly what we’ve done.  We have kept our promise.

We now have a continuous presence of U.S. troops in Poland with our aviation detachment at Lask Air Base.  We continuously rotate personnel and aircraft into Poland.  Under the European Reassurance Initiative that I announced here two years ago, we’ve increased training, exercises and readiness.  Earlier this year, I announced a four-fold increase to this effort, proposing $3.4 billion to pre-position more U.S. heavy equipment in this region and to continuously rotate an armored brigade in Europe.

Today, I’m announcing further steps to bolster NATO’s defense and deterrence posture.  As the alliance prepares to enhance our forward presence in Central and Eastern Europe, I can announce that the United States will be the lead nation for the U.S. — for the NATO enhanced presence here in Poland.  And that means the United States will deploy a battalion — roughly 1,000 American soldiers — here, in Poland, on a rotational basis to serve shoulder-to-shoulder with Polish soldiers.

In addition, when the new U.S. armored brigade begins rotating through Europe early next year, its headquarters will be here in Poland.  In other words, Poland is going to be seeing an increase in NATO and American personnel and the most modern, capable military equipment, because we will meet our Article 5 obligations to our common defense.

More broadly, I want to thank Poland for its continued strong support for Ukraine’s efforts to defend its sovereignty and territorial integrity in the face of Russian aggression.  We discussed the importance of continuing to provide Ukraine with the assistance it needs to strengthen its military and to pursue political and economic reforms.  And we fully support the efforts led by Germany and France to resolve the conflict in eastern Ukraine diplomatically.  And the United States and Poland are united in insisting that sanctions remain in place until Russia fully meets its obligations under the Minsk agreements.

On the economic front, our two countries will continue to work together to enhance Poland’s energy security.  Poland recently opened a new terminal to receive liquefied natural gas, and the President was describing in detail the plans involved in these facilities.  This is going to help diversify Poland’s energy supply.  American companies are investing their high-tech expertise in wind and solar to help Poland harness more renewable energy.  And we’ll continue to deepen our cooperation as we pursue a cleaner, more sustainable energy future together.

And finally, I want to congratulate Poland on recently celebrating the 225th anniversary of its constitution — the oldest written constitution in Europe.  And this speaks to the long yearning of the Polish people for freedom and independence.  Indeed, after the Cold War, the rebirth of Polish democracy was an inspiration to people across Europe and around the world, including in American.  Because Poland’s progress shows that democracy and pluralism are not unique to any one of our cultures or countries — they are describing universal values.  And a central tenet of American foreign policy is that we speak up for these values around the world, even with our closest allies.

And it’s in that spirit that I expressed to President Duda our concerns over certain actions and the impasse around the Poland’s Constitutional Tribunal.  I insisted that we are very respectful of Poland’s sovereignty, and I recognize that Parliament is working on legislation to take some important steps, but more work needs to be done.  And as your friend and ally, we’ve urged all parties to work together to sustain Poland’s democratic institutions.  That’s what make us democracies — not just by the words written in constitutions, or in the fact that we vote in elections — but the institutions we depend upon every day, such as rule of law, independent judiciaries, and a free press.  These are, I know, values that the President cares about.  These are values that are at the heart of our alliance, which was founded, in the words of the North Atlantic Treaty, “on the principles of democracy, individual liberty, and the rule of law.”

And when I think of all the progress that we celebrated two years ago in Castle Square — all the odds that the people of Poland have overcome throughout history, and how the Solidarity movement helped defeat Communism, the freedom that the Poles have won — it makes me confident in the future of Polish democracy.  And the fact that Poland stands and needs to continue stand as an example for democratic practices around the world.  With the new commitments that I’m announcing today, the people of Poland, and our allies across the region can remain confident that NATO will stand with you, shoulder-to-shoulder, no matter what, today and always.

So, again, Mr. President, thank you for your hospitality.  Thank you to the Polish people.  I know that it’s a lot of work to prepare for these summits, but I can tell that you’ve done an outstanding job and I’m sure it will be a great success.