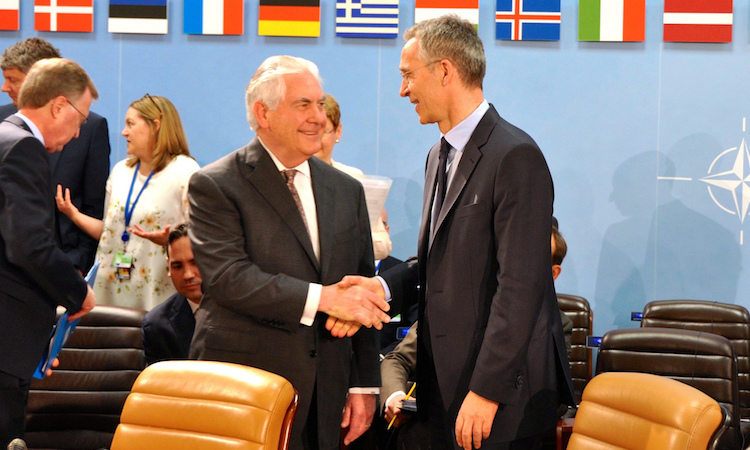 Good morning, Secretary General and my fellow ministers, and thank you for the opportunity to speak.

Let me be very clear at the outset of my remarks: the U.S. commitment to NATO is strong and this Alliance remains the bedrock for transatlantic security.

This Alliance was forged from the ashes of World War II, and for more than half a century has been a necessary defense measure against common threats. Our bond remains essential for facing national and international security challenges in an increasingly unstable world. At the top of this list is defeating ISIS, which is a threat to all member countries and partners.

The NATO alliance is also fundamental to countering both non-violent, but at times violent, Russian agitation and Russian aggression.

The United States is committed to ensuring NATO has the capabilities to support our collective defense. We understand that a threat against one of us is a threat against all of us, and we will respond accordingly. We will uphold the agreements we have made to defend our allies.

These are not just words. Tomorrow, a U.S. enhanced, forward presence battalion will be deployed in Poland.

However, as President Trump has made clear, it is no longer sustainable for the U.S. to maintain a disproportionate share of NATO’s defense expenditures. Allies must increase defense spending to meet their commitments in accordance with the Wales Pledge on Defense Investment. The Alliance’s ability to secure the transatlantic community depends on it.

Allies must demonstrate by their actions that they share U.S. governments commitment. Many allies have sent positive signals in response to the President’s message – and we deeply appreciate the Secretary General’s own help here – but there is more to do.

To echo what Secretary Mattis said at the Defense Ministerial in February: Allies that do not have a concrete plan to spend 2 percent of GDP on defense by 2024 need to establish one now. Allies that have a plan to reach the 2 percent guideline need to accelerate efforts and show results. And for those Allies already spending 2 percent of their GDP on defense, we applaud your efforts and hope you’ll work with us to encourage others to do more.

Our goal should be to agree at the May Leaders meeting that by the end of the year all Allies will have either met the Pledge guidelines or will have developed plans that clearly articulate how, with annual milestone progress commitments, the Pledge will be fulfilled.

After last week’s tragic events in London, the importance of that fight has been made clear yet again. NATO has a number of unique capabilities it can bring to this fight. At the Warsaw Summit last year, NATO members recognized cyberspace as an operational domain, alongside land, air, and sea.

I am encouraged by our efforts so far at cybersecurity and preventing cyberattacks. As ISIS increasingly leverages the internet as a powerful tool for recruitment and propaganda, we must consider how we can disrupt and aggressively counter their online operations.

I want to be clear on one point: we do not believe NATO has to lead everywhere in the fight on terrorism. Others will often have that role, including national governments, the Coalition to Defeat ISIS, or the European Union. But NATO must add value where it can and provide greater support. The security of our people requires it.

As we plan for the May Leaders meeting, the United States is considering what more NATO might do, particularly in bringing stability to Iraq and contributing to the Coalition to Defeat ISIS.

NATO’s work in Afghanistan remains critical. The United States is committed to the Resolute Support Mission and to our support for Afghan forces. NATO’s “Train, Advise, And Assist” mission is essential to our shared goal of ensuring that Afghanistan develops the capability to contribute to regional stability and prevail over terrorist threats, including al-Qaeda and ISIS.

The ongoing commitment of NATO Allies and partners to peace in Afghanistan, including to an eventual settlement between the Afghan government and the Taliban, protects this Alliance’s interests, and, when successful, ensures that Afghanistan never again becomes a safe haven for terrorists.

While meeting the challenge of the fight against terrorism, we must remain vigilant in strengthening NATO’s eastern defenses. Allied commitments to Operation Atlantic Resolve and Enhanced Forward Presence have sent a clear message. But long term stability, from Baltic to the Black Sea, depends upon all allies, not just those who are the most exposed, paying their full share for defending the Alliance.

In closing, I repeat the American commitment to this Alliance. The United States will not abandon its allies or forget its friends. Many of the nations in NATO have been working together for decades to protect shared freedoms, shared values, and shared security. But we cannot keep protecting them without meeting our shared responsibility of financial and other resources.

We need to take on the work necessary in the next two months to ensure the May meeting is a success. We look forward to working with all of our NATO allies to accomplish this. Thank you.