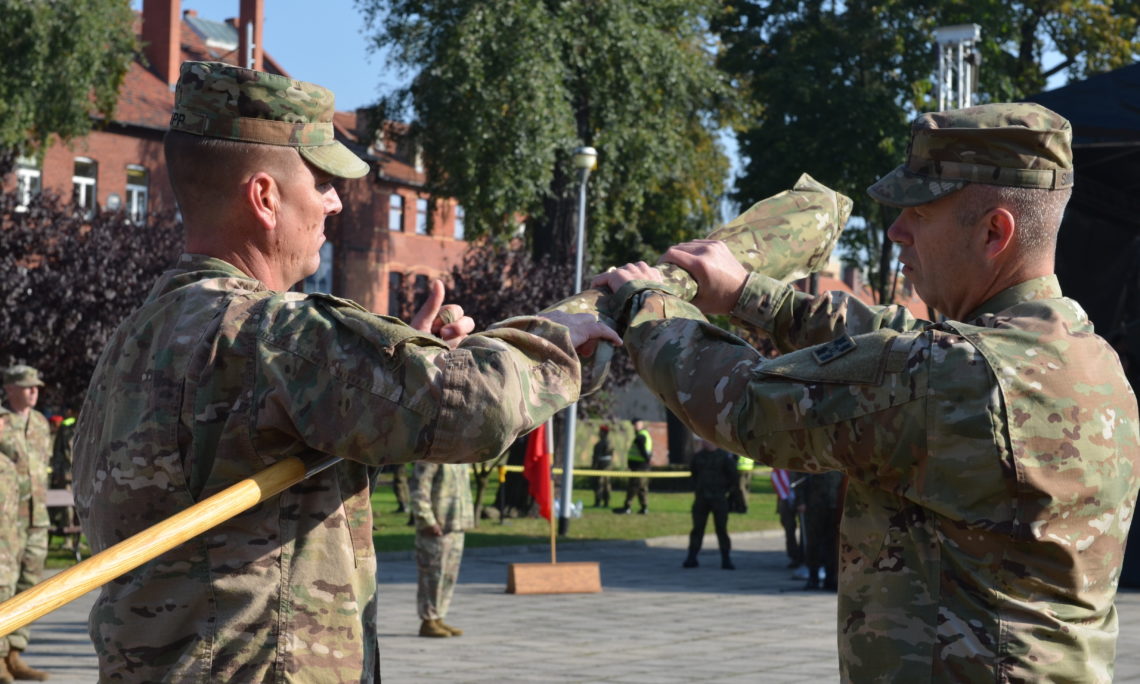 Good morning, Major General Mika, Major General George, Brigadier General Czosnek, Mayor Marchewka, distinguished guests, and the gracious people of Zagan. Today’s ceremony is significant for our unit in a number of ways. First and foremost, this occasion stands as an official handover of one of Europe’s most critical missions from the 4th Infantry Division’s Iron Brigade to the Dagger Brigade of the 1st Infantry Division. Secondly, today marks the very first transfer of authority between armored brigade combat teams as the U.S. Army provides a continuous presence in Europe aimed at deterring anyone who tries to threaten our NATO Allies. This ceremony, in turn, reaffirms the continued commitment of the United States to NATO and the security of Europe.

The location of this ceremony is also significant. It is where we began our journey as a unit upon arriving in Europe and where we made the first of many great friends. It is only fitting that our journey ends here. I cannot thank the people of Poland enough for their support and the warm welcome they extended 3rd Brigade when we first arrived in January. Those bonds of friendship are more evident today than ever as I look across this square. To you, we extend our personal thanks for embracing our Soldiers – you’ve provided us with memories that we will cherish for life.

I also look out at the Soldiers standing alongside us with great pride because we stand together with Soldiers from the Polish 11th “Lubuska” Armored Cavalry Division. Upon our arrival nine months ago, the Black Division welcomed us to Zagan, providing us with everything we needed to prepare our vehicles and Soldiers days after arriving from Colorado. The 11th Armored Cavalry Division eagerly sought opportunities to train with us, learn from us, and teach us … building our confidence in our ability to fight as a powerful, unified team.

The 11th Lubuska Division stands as an example of the strength of NATO. They are one of many Allies who trained by our side throughout the last nine months. We had the privilege to conduct exercises in 11 countries with Allies and partners from nearly 25 nations. That included working side by side with land and air forces from Poland, Estonia, Latvia, Lithuania, Germany, Hungary, Romania and Bulgaria. It included executing several large-scale movements across central and eastern Europe to show that, when called upon, our forces can and will move quickly to wherever we are needed, whenever we are needed.

The training we conducted was unprecedented – in total, we fired more than 1 million rounds of ammunition from tanks, artillery, small arms, you name it. Together, we demonstrated how the lethality of a U.S. armored brigade is magnified when we train as part of a greater NATO force. Having trained alongside our Allies, what is clear to me is that our European Allies are incredibly capable. While our languages may vary, we have a common goal of standing strong together. Twice, our unit spearheaded a multinational task force of nearly 3,000 Soldiers, providing us a chance to learn from and integrate with forces from nations like Poland, Albania, Montenegro, Georgia, Romania, Ukraine and, many more. The experience we gained was invaluable, and our Soldiers are departing Europe as arguably some of the best trained in the U.S. Army.

We couldn’t have succeeded at any of this without the support of U.S. Army Europe. Units like the 21st Theater Sustainment Command helped move our more than 2,800 pieces of equipment across Europe on over 10 occasions and is now assisting in our departure back home to Colorado. The 7th Army Training Command at Grafenwoehr and Hohenfels training areas in Germany provided some of the world’s best training facilities and the exercise challenges to go along with them. Other rotational units like the 10th Combat Aviation Brigade from New York, united with us multiple times to help us build a lethal, combined capability.

In retrospect, Europe provided a wealth of training opportunities and powerful fighting forces that forced us to push ourselves further, faster, for longer than we had ever done in recent history. In short, we are better because of you.

Now as we prepare to depart Europe, we hand over this mission to an equally capable fighting force. I am completely confident the Dagger Brigade will continue to demonstrate why the armored brigade combat team is the U.S. Army’s most lethal unit. The Dagger Brigade now serves as the ready heavy brigade for a mission that has shifted over the last nine months from one of assurance to one of deterrence against anyone who would dare threaten our collective way of life. Rest assured – they are strong….they are absolutely ready. I am sure they will build upon the lessons we have learned and carry this Alliance to new heights. I wish them all nothing but the best of luck.

Thank you again to everyone. Together, you helped this mission succeed. You helped affirm that peace is reinforced by cooperation, strength comes from unity, and success comes from hard work and perseverance. We couldn’t be prouder to call each of you our Allies….more importantly, we’re proud to now personally call each of you a friend.