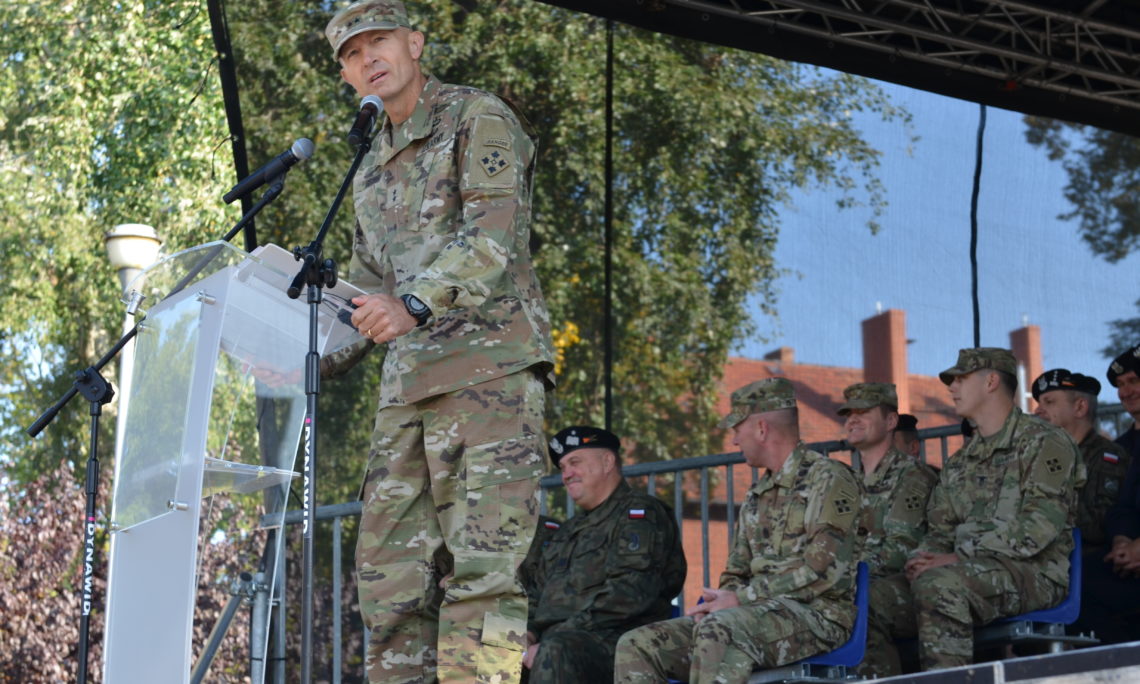 Good morning (dzien dobry), my grandparents were born in Poland and it’s an honor for me to be here with you today. Thank you for attending this transition of authority ceremony between Iron Brigade of 4th Infantry Division and the Dagger Brigade of 1st Infantry Division. This ceremony signifies the transition between two storied formations, and combat ready units that demonstrate the United States’ commitment to the collective security of our Allies.

16 years ago, on 12 September 2001, the alliance invoked the principle of Article 5… as an act of solidarity. Since that day the members of NATO and our partners have fought side by side in support of operations in Afghanistan. I have seen the strength of this partnership in combat having proudly served alongside Soldiers from Poland, Germany, Latvia, Lithuania and many others. Between Soldiers, these relationships now run deep with mutual respect. Those same close relationships have deepened here in Europe and made all of us better as a result. In all cases I have been extremely impressed with the professionalism and proficiency of our NATO Allies. Our joint efforts over the past two decades have strengthened our alliance and set the conditions for our partnership in Atlantic Resolve. History has shown that future conflicts will be a multinational fight and our nations interoperability will be critical to deterring our adversaries and posturing forces to act quickly if that deterrence fails.

The complexity and ambiguity of the threats that face us today demand a vigilant, capable, and interoperable force to meet them. The Iron Soldiers of 3ABCT were the first Armor Brigade to meet these challenges. The United States will continue to conduct certification training and validation with Allies and partners in Estonia, Latvia, Lithuania, Poland, Slovakia, Hungary, Romania and Bulgaria as a part of Atlantic Resolve.

The presence of an American Armor Brigade Combat team is an important part of the U.S. European Command’s continued effort to deter aggression here, ensure a free way of life is maintained for our allies, and that Europe as a whole is free, prosperous and at peace.

Another critical aspect of Atlantic Resolve is forging a Team of Teams to meet these diverse challenges. The opportunity to live, work and train alongside our NATO Allies and partners builds confidence in our ability to operate in these teams. I have no doubt that, if call to do so, Allied land forces would respond in a cohesive and unified force to deny any acts of aggression against Europe and our shared interests.

One of these Team of Teams that I would like to highlight is the relationship built between the Iron Brigade and the Polish 11th “Lubuska” Armored Cavalry Division. The history of collaboration between the U.S. and Polish militaries dates back to the U.S. Revolutionary War. These strong and historic ties continue today. The assistance and welcoming atmosphere of the 11th was crucial to the Iron and Dagger Brigade’s ability to quickly achieve full combat readiness within the first two weeks of arriving in Europe. We could not be more thankful for the support of the Polish people, government, and partnered forces. Our Soldiers are honored to stand side by side with you.

In early January of this year, the Iron Brigade arrived in Bremerhaven Germany with their full complement of equipment. The brigade moved 2,800 pieces of equipment and 3,500 Soldiers on a combination of sea vessels, trains and ground convoys from Germany to Poland and were firing live rounds with our Polish partners within days. This rapid movement was possible because of the efforts and coordination of multiple allied nations and it set the tone for the deployment. The Iron Brigade embraced the mindset that to defeat an enemy here they would have to “out-think, out-pace and out-mass their adversary to succeed”.

Building from their mindset, the Iron BDE began an intense training cycle with our allied and partnered nations. They moved three combined-arms battalions from Poland to Germany, the Baltic and Black Sea regions. They moved the brigade headquarters and 3+ battalions from Poland to Germany for Combined Resolve VIII in April. In June and July, we relocated the brigade headquarters and 5 of our 7 battalions to Romania, Bulgaria and Hungary for Saber Guardian; and they returned those battalions from the Black Sea region to Poland and Germany at the conclusion of the Saber Guardian exercises.

During this period the Iron Brigade participated in 13 Multi-national exercises training with Soldiers from 25 allied and partnered Nations. In addition to the training, 3ABCT learned how to sustain themselves in this type of environment conducting over 250 logistical convoys and covering 116,000 km. Using U.S. trucks traveling on Polish roads, over German bridges and through European cities this alliance gained valuable lessons of what this type of warfare will require. Additionally, to build the Team, the Iron BDE conducted countless community engagements from clean-up days here in Poland, to planting trees in Estonia, to teaching English classes as they moved around Europe.

With the volatile and dangerous environment that we live in, this mission reaffirms our commitment as an Alliance and provides our militaries a rare opportunity to train and share the valuable lessons that we have gained from the sustained operations in Afghanistan. Today we must be READY… READY to meet the destabilizing forces that wish to see our Alliance fail and READY to protect the security and sovereignty of Europe. These exercises also give us an opportunity to forge a force that is READY to meet challenges anywhere in the world. The Iron BDE is a better formation today and the best trained U.S. brigade because of this partnership and the training they conducted here in Europe. With four brigade level training exercises, including two as a multi-national task force, 22 company level live fires and over 100 platoon level live fire events this brigade has seized the opportunity and with our Allies proven they are READY to fight. COL Simmering and CSM Rapp we are proud of what the Iron BDE has accomplished. The Iron BDE is READY, you have been respectful to our Allies, you are experts in your craft, you are athletes that are prepared for any challenge, you are disciplined, and you have seized this opportunity to make your formation better.

As the Iron BDE finalizes their rotation we welcome another tested, proven, and combat ready Armor brigade combat team. 4ID has worked with the Dagger BDE and they have proven themselves to be expert Warriors and a team oriented formation. They provided valuable insight and lessons learned to our division’s 1st Brigade enabling their success at our National Training Center. Now, the Iron Brigade has been able to reciprocate in assisting the Dagger BDE in their efficient deployment and integration into theater.

On the heels of a CENTCOM deployment, the Dagger BDE set on the mission to reset their formation and enter Europe as lethal and READY formation. In a condensed training cycle the Dagger Brigade maximized every training opportunity to hone their skills and prepare for this mission. A successful National Training Center rotation, where the brigade utilized speed, maneuver and lethality to outpace their enemy, makes them the right formation to assume this mission.

Following their CTC rotation the brigades focused maintenance period enabled them to refine the skills required to rapidly transition and mass where needed. They loaded over 2700 pieces of equipment on trains at Fort Riley in only 84 hours, and then within 5 days of ramps down in Germany the Dagger Brigade, pick right up where the Iron Brigade left off. Partnering with the 11th Armored Cavalry Division, the Dagger BDE had rounds down range in 5 days from ramps down in Germany.

The Dagger Brigade has proven they are prepared and READY to meet the challenges of this important mission. I know they will continue to push the pace and show our enemies that we stand Ready! COL Gardner and CSM Copridge, it’s obvious the Dagger BDE is a great formation. You are already off to a brilliant start and we’re confident your team will raise the bar during your rotation here in Europe.

I can’t thank our partners enough for their continue support of our armored brigades and our Mission Command Element, whose tireless efforts make these exercises possible. We are proud to be a part of this historic mission and are Ready to Fight with our Allies.