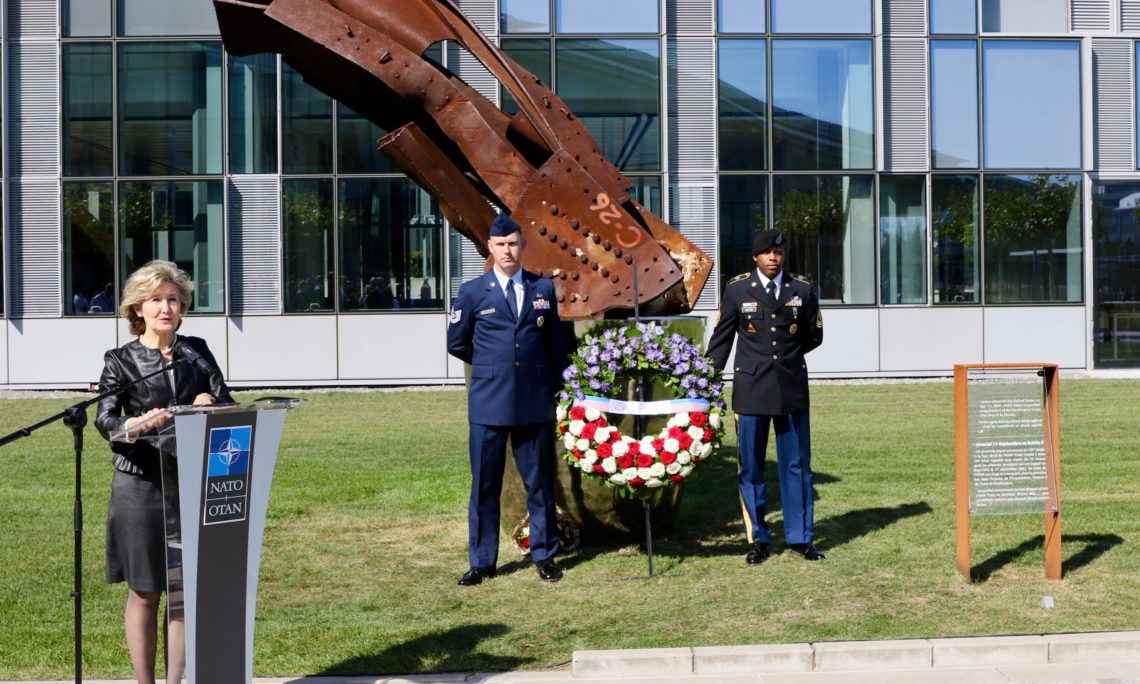 Thank you so much all of you from our wonderful U.S. Delegation and to the Ambassadors who came out today, my fellow American, Rose Gottemoeller, and the Ambassadors from NATO, thank you.

Today is a solemn day here in front a piece of the Twin Towers. We think about the memories of the 3,000 people who lost their lives from so many countries who [were] working in the World Trade Center Towers that terrible day. While terrorists tried to show the worst they could, our people demonstrated the best of humanity.

From the first responders who rushed into danger in New York and the Pentagon, to the heroes on Flight 93 that was headed to the United States Capitol but crashed in Pennsylvania, to regular people who found ways time and again to help those injured and grieving across the country.

Our country and world changed that day. And while America was attacked, we were not defeated. Not even close.

History recalls September 11 as a national day of tragedy, but here at NATO, we take stock in what happened in the aftermath of that terrible day seventeen years ago. That is the other part of this memorial. It is what happened across the street inside this organization immediately afterwards.

Ambassador Nick Burns tells the story that it was he that started getting calls saying NATO wants to invoke Article 5. He said he called Condoleezza Rice at midnight in the United States after she had a horrendous day. And he said, “Should we ask for this? Should we accept it?” She said, “Yes” and hung up. He laughed and said, “Okay, we’re going to war,” and Article 5 was invoked.  That’s the lesson I want to take to all of us in the U.S. Delegation as we do our work. When we are consulting with counterparts, when we’re having coffee, when we’re sitting in meetings, to remember that our Allies were there, and probably their predecessors, were there for the United States standing for solidarity. They came to our side. And immediately after 9/11, we took the fight to terrorists directly. We continue that work today in Afghanistan and Iraq. Today, as NATO Allies, we are continuing that work that was started at 9/11.

And we were reminded that just a few weeks ago, when U.S. Army Command Sergeant Major Timothy A. Bolyard payed the ultimate price for our freedom after seven deployments to combat zones.  Sergeant Major Bolyard was no stranger to the risks inherent in that mission. Six bronze stars were testament to his valor and commitment to protecting us against another 9/11. As he was nearing the end of his final deployment, Sergeant Major Bolyard was in a session in Afghanistan showing trust by not wearing a bullet-proof vest. He was shot and killed by an Afghan [police officer].  He is the example that we have enduring today of honor and service and commitment. That is why our work at NATO with our Allies beside us is so vital for our country.

I want to recognize one of our new employees at USNATO, Tyler DeVaney. Tyler enlisted in the Army in 2011. After graduating from college, he deployed to Afghanistan in 2012 and 2013 as part of a team that was assigned to do village stability operations in Wardak Province. During an attack, Tyler was shot three times. Two of his teammates didn’t make it at all. The Army awarded Tyler the Purple Heart and he retired in 2014 as a Sergeant and we are so proud to have you on our team today.

Not too long ago when we were honoring the Greatest Generation of World War II, many people asked, what if we were attacked again? Would Americans stand and fight? Would we have the will to stand for freedom, for our way of life? Would our generation be as great as the greatest generation? Would we stand for what they died for to make sure our children and grandchildren have the same opportunities? And 9/11 happened and we got the answer. We got the answer with Tyler. We got the answer with Sergeant Major Bolyard. We got the answer with people who stepped up on that very day and said, my country needs me and I’m going where we have to go. Yes, we’re fighting for our way of life, our values and our freedom so that our children have what we were given. And we do it with our Allies right here in NATO, with our Ambassadors from all countries here in NATO. We’re standing up like our forefathers and mothers did, and that’s what makes me so proud to serve our nation and this great alliance.

Thank you for coming out for this ceremony today. Now, it’s the first time we were able to have a real symbol of what happened on 9/11, which is one of the key missions of NATO today and we so appreciate having this opportunity. I know this will happen every year because we will never forget. We will never forget. When our country was attacked, NATO had our backs and we will have the backs of every one of our Allies if it ever happens to them.

Thank you very much.