Remarks by Ambassador Hutchison to Commemorate the September 11 Attacks
By U.S. Mission to NATO
4 MINUTE READ 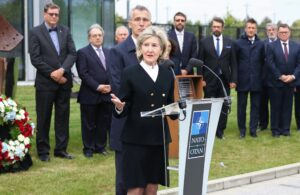 Good afternoon.  Thank you for gathering with the US Mission to NATO in solidarity to mark the 18th anniversary of the 9/11 attacks on the United States of America.

We pause here today in front of this monument of metal twisted by hate and violence to remember the nearly 3,000 victims from more than 60 countries who were taken from us when terrorists attacked my country.

As we stand here, we also remember the heroes of that day, including the first responders who raced into harm’s way to rescue and the ordinary citizens who put their own lives at risk to help complete strangers.

And we will never forget that when the United States was attacked, our NATO Allies had our back.  Article 5 was invoked for the first and only time in the Alliance’s history sending the message loud and clear:  When one of us is attached we are all attacked.

From then until now, the scourge of terrorism has indeed affected other Allies.  Madrid, Paris, Istanbul, Brussels, London – we remember those victims today as well.

As an Alliance, we have responded.  Standing shoulder to shoulder, we are fighting terrorism in Afghanistan.  Together we are training Iraqi forces to help prevent the return of ISIS. We are projecting stability to ensure that there will never again be a haven where this kind of malevolence can germinate into plans that reach our homes and cause such harm.

NATO was the answer seventy years ago, when we first came together to provide collective security, and it is still the answer today.

For two things remain constant:  There will always be people who want to destroy our values and the freedom we cherish.  And as long as we stand united, we will always defeat the minions of tyranny.

And now I would like to ask NATO Secretary General Jens Stoltenberg to speak on behalf of our great Alliance.

Please join me in observing a moment of silence at the exact time 18 years ago when a dark cloud descended on our country.

We will never forget.  Thank you for standing with us to remember.