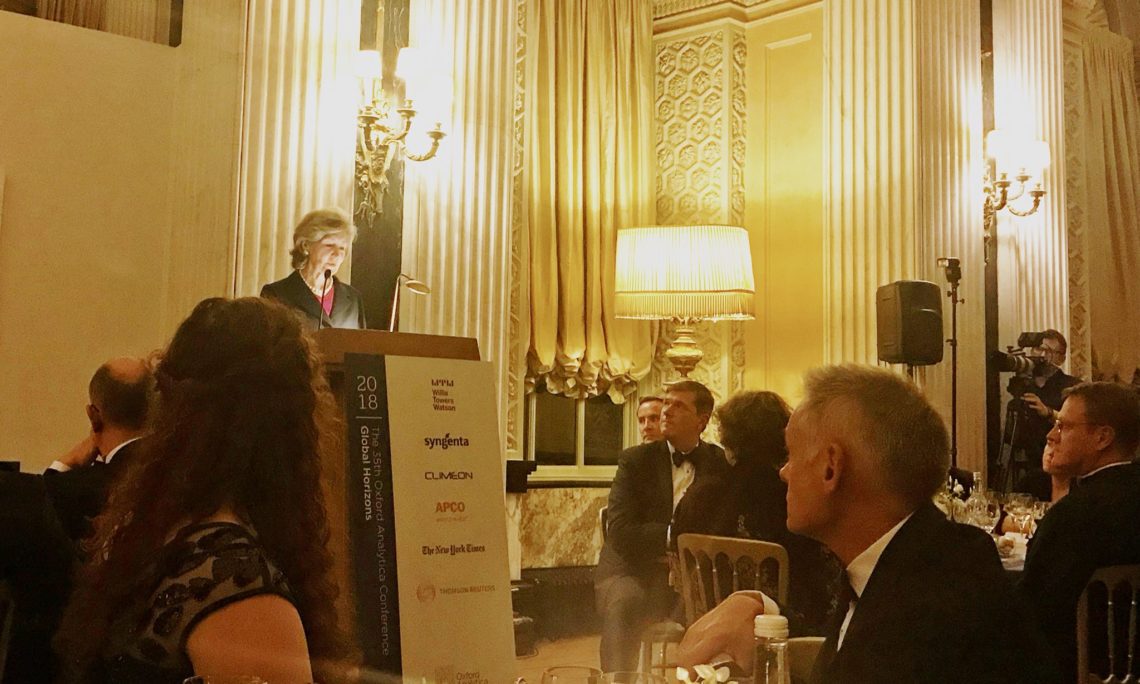 I would like to start by thanking Oxford Analytica and my friend, Amb. John Negroponte. When he contacted me personally and explained this wonderful opportunity, I wanted to come and join you.

Bernard Shaw once said that “England and America are two countries separated only by the same language.” True story – on one of my flights last week on Brussels Air, the language offerings for entertainment included French, German, Spanish, American English, and UK English!

So, I am here to talk about what NATO is doing now and to give you an idea of what the future of the alliance will bring. I can think of no better place to have this discussion than at Blenheim palace, the birthplace of Winston Churchill. The former prime minister may be famous for his leadership, speeches, and books, but at NATO, he is fondly remembered as one of the organization’s visionary forefathers. He understood that shared values in Europe were not enough by themselves. If they were to endure, they needed common defense. (And it would be helpful to also have America). From the ashes of World War II, NATO rose to deter aggression and prevent war. And as NATO approaches its 70th anniversary next year it has succeeded. The transatlantic bond has made NATO the strongest alliance in world history. Our bond is unshakeable.

I know that since the U.S. election there been a lot of ink spilled and predictions made about the future of NATO and the direction of U.S. policy. So, on this point I want to be very clear: the July summit in Brussels demonstrated our strength, our unity of purpose, and our commitment. All 29 allied heads of government stated with one voice that Russia’s challenge to the rules-based international order will not stand. We are all familiar with the Kremlin’s transgressions: the invasion of Georgia in 2008; the so-called annexation of Crimea and the downing of a commercial airliner over Ukraine in 2014; the attacks against our democratic institutions; and only seven months ago, 125 kilometers from where we are, the targeted assassination by chemical weapons within NATO’s borders. Vladimir Putin is probing in every corner of the alliance. Testing how far Russia can go and stay below Article 5 (our pledge: if one of us attacked – we are all attacked).

NATO’s leaders took steps at the summit to position the alliance to combat all threats from wherever they emanate. This required adaptation of the alliance to address two major challenges: deter Russian aggression and wipe out terrorism where it is fomenting so it can’t be exported to any in our alliance.

Actions at the Summit:

Second, we are developing cyber and hybrid deterrence.

Third, NATO is pursuing a concerted effort to train the Afghan military to root out the Taliban and stabilize Afghanistan.

Fourth, Because of the tragic lesson in Iraq, our leaders initiated a follow-on mission to train Iraqi soldiers and police to assure ISIS cannot rise again.

The summit demonstrated that NATO is adapting and innovating. This is critical in an era of rapid technological advances and mutating threats.

History supports this supposition. Twenty years ago – who would have said one of the major common threats to our allies would be radical Islamist suicide bombers? After World War II, we actually thought Russia might become a member of the NATO alliance. But instead, NATO has adapted itself to address the asymmetric war of terrorism and Russia’s various malign attacks. NATO’s ability to respond effectively to these kinds of novel threats are what makes the alliance so valuable and enduring.

Another major topic from the summit is the necessity of allies to spend more on defense in their own countries. These defense capabilities must also be useable in joint operations. Why is the 2% of GDP commitment so important? It was set by the heads of state and government at the Wales summit in 2014 because it was the consensus that the aggregate 2% of each nation’s GDP was necessary to produce the force in fighter aircraft, combat ships, and armed battalions to deter and defend against, especially, a more menacing Russia.

As a former senator, I know how difficult it can be for a government to support increased defense spending when there are other worthwhile competing demands. That is why I was encouraged when legislators and leaders from across NATO made the commitment. Now ALL NATO members have stopped the decline in defense spending. All are increasing their security investment. Eight nations are now on track to reach the 2% pledge this year, and two thirds of allies already have plans to reach the two percent benchmark by 2024. This translates into an extra $266 billion in new investment in defense between now and 2024. This is a good start and must continue.

You may ask, why is the United States so focused on 2%? It is because you cannot believe in NATO’s purpose, without realizing the shared responsibility necessary to accomplish that mission. You can’t ask the police to make the streets safe if you don’t hire enough patrols and give them the equipment to do their job. Defense investment delivers a fully prepared alliance. America is doing its part, though we are far beyond 2%, still we are increasing our own security spending as we ask allies to do the same.

For 70 years, NATO has provided the peace that has allowed our economies to recover and grow in the wake of the war we won together. Through our commitment to secure a better future for our people, we have all benefited from the transatlantic bond: six of the world’s 10 largest economies are NATO members. Together, NATO allies make up half (47%) of the world’s GDP.

RISKS:
So what are the risks to our security and prosperity? It is countries with leaders that do not use their power to lift up their own people – but instead use power to tear down our success; our strength of freedom, self-governance, and human rights.

One trend that I view as particularly dangerous are efforts to undermine the union of western democracies in NATO. It is that unity of allies standing together that is the core of NATO’s strength.

So, how does Vladimir Putin use his power to compete with the West? His country is the largest in the world by landmass, rich in natural resources, and boasts 144 million people. From his unrivaled seat in the Kremlin, he has complete control over Russia’s media and military.

Despite these advantages, his country remains unattractive to international investors because of the corruption his system of power engenders, the aging infrastructure he cannot maintain, and a regulatory environment unreliable to foreigners. In fact, in 2016, Russia had about the same level of foreign direct investment as Spain, a country with less than a third of Russia’s population and 3% its size.

So his strategy appears to use his technology development to exploit divisions, foment unrest, and probe for weaknesses in allied unity. He uses malign hybrid warfare against individual countries, rather than face them together in a unified alliance. He seeks to disrupt democratic elections and offer economic incentives that result in dependency.

NATO was founded to bring together countries with shared democratic values, to insulate ourselves from such plots. In a more complicated, interconnected world, it would be easy to sacrifice long-term strategic security in favor of short-term economic gains. But that is the danger we face from adversaries that seek to make us choose economic interests, in the hope of weakening our security.

I believe that NATO’s challenge in the next decade will be to ensure the security that is requisite for economic prosperity. The vitality of our economies and the security of our societies are not mutually exclusive. Security is the foundation for economic vitality. The growth of our economies for the last 70 years could not have been possible without the safety NATO provided. That security blanket gave space for entrepreneurs and free markets to increase our standard of living and provide meaningful employment for our citizens.

If you believe that economic decisions can be divorced from strategic interests, then consider how corporations such as Daimler, Tesco, or Sanofi would fare in a world without the stability our nations provide for their citizens. If any of us focus more heavily on the bottom line and divorce decisions from strategic considerations, then remote risks start to become real commercial concerns: supply chains become exposed to disruptions, agreements cannot be enforced, and capital and resources cannot find their way to where they are needed most. Ultimately, without security, our economies become less resilient and more vulnerable to those who do not share our values.

NATO has created a durable peace where our economies and societies flourish. But that peace is under new stress, and we must be vigilant to deter harm.

Strength without unity will eventually fail. Unity without strength will fail sooner. NATO is based on unity and strength and we, together, must never become complacent.